The Black authors all Catholics should read 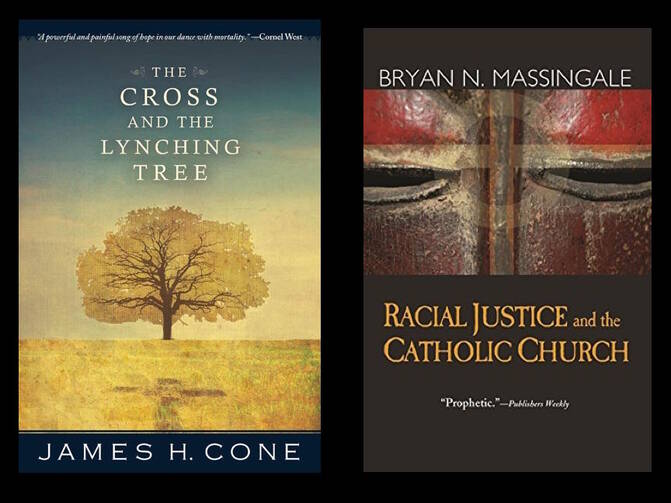 Almost eight years ago, America’s literary editor, Ray Schroth, S.J., asked a number of Black Catholic scholars to recommend a book by a Black author. Because the scholars came from a broad spectrum of disciplines—fiction, history, music, biography and liturgy—the result was a diverse list of recommendations. I think it still stands up, though of course many of us would add books and authors published since to the list. As we celebrate Black History Month, it is worth revisiting.

Cyprian Davis, O.S.B., author of The History of Black Catholics in the United States, recommended Leonard Pitts’s Freeman. Kim R. Harris, co-author of Welcome Table: A Mass of Spirituals, chose Willie T.: The Untold Story of Willie ‘Bill’ Johnson and His Life Before, During and After the Golden Gate Quartet by Chandra J. Johnson. Cecilia A. Moore of the University of Dayton in Ohio suggested Alison Stewart’s First Class: The Legacy of Dunbar, America's First Black Public High School.

James Cone in America, 2006: "White theologians have not succeeded in making an empathetic bond with the pains and hurts of people of color."

C. Vanessa White, a professor at the Catholic Theological Union in Chicago and co-editor of Song of Our Hearts and Meditations of Our Souls, recommended Black Pain (It Just Looks Like We're Not Hurting) by Terrie M. Williams. Diana L. Hayes, an emerita professor of theology at Georgetown University, chose Raphael G. Warnock’s The Divided Mind of the Black Church: Theology, Piety and Public Witness.And two scholars recommended books by James H. Cone: Andrew Prevot of Boston College picked The Spirituals and the Blues: An Interpretation and the Rev. Bryan N. Massingale, author of Racial Justice and the Catholic Church, chose The Cross and the Lynching Tree.

In his recommendation of The Cross and the Lynching Tree, Father Massingale wrote, “Cone unearths the little acknowledged shadow of brutal terrorism that haunts the racial divisions that still plague us. He shows, with stark clarity, how lynching’s logic continues to sustain public indifference toward persons of color, especially those who are poor.”

Dr. Cone was interviewed by America associate editor George Anderson, S.J., in 2006 about white supremacy and the role of theologians in striving against it (and the historical failure of many to do so). The silence of many white theologians in the face of white supremacy, Cone said, "stems partly from a distorted understanding of what the Gospel means in a racially broken world. White theologians have not succeeded in making an empathetic bond with the pains and hurts of people of color. If theologians perceived their own sons and daughters and parents as being discriminated against, they would not only write passionately against it but would make their rejection of injustice an essential part of their reflection on the Gospel."

Upon Dr. Cone’s death in 2018, he was remembered in America by Robert Ellsberg, his longtime editor. Dr. Cone, he wrote, saw his theological works as “heir to a long tradition of enslaved and oppressed black people who recognized the life-affirming and liberation-affirming message of the cross, even in the face of white ‘Christians’ who ignored and desecrated its meaning.”

"Will we strive to be a nation of liberty and justice for all? Or only for some? For those who are white and angry? For those who look like and pray like us?"

Last January, Father Massingale wrote “The Racist Attack on Our Nation’s Capitol” for America on the same day pro-Trump rioters attacked Congress and the civil servants defending it. “As I watch the unimaginable scenes of insurrection from our nation’s capital, where our entire Congress was held hostage by the actions of a deluded and deranged mob, I am filled with anger,” he wrote. “Righteous anger. Because while what we are watching is horrifying, it is not surprising.”

We should not feign surprise, Father Massingale wrote, because Donald Trump’s popularity had always come from “stoking white resentment at the changing face of America.” The riots were a “clear declaration that many white people would rather live in a white dictatorship than in a multiracial democracy. If democracy means sharing power with people of color, especially Black people, then they want no part of it. Today is the inevitable consequence of the nation’s tolerance of white racism.”

Not all the blame could be laid at Trump’s feet, however: The insurrection was “the direct consequence of four years of enabling complicity, cynical appeasement and cowardly silence,” and not just by politicians, he wrote. “It is also the consequence of the complicit silence and active support of religious leaders who refused to confront the cancer of white nationalism that this president endorses and who excused all manner of his wrongdoing, incompetence and brutality by saying these were not the ‘pre-eminent evil’ that should determine a Catholic’s vote.”

The nation faced a fundamental question, Father Massingale wrote. “Will we strive to be a nation of liberty and justice for all? Or only for some? For those who are white and angry? For those who look like and pray like us? Until we face those questions,” he wrote, “we dare not act surprised by the horror that we saw at the Capitol today. Or when it happens again.”

Bryan Massingale on Jan. 6, 2021: "Today is the inevitable consequence of the nation’s tolerance of white racism."

In this space every week, America features reviews of and literary commentary on one particular writer or group of writers (both new and old; our archives span more than a century), as well as poetry and other offerings from America Media. We hope this will give us a chance to provide you more in-depth coverage of our literary offerings. It also helps us to alert digital subscribers to some of our online content that doesn’t make it into our newsletters.