‘The Many Saints of Newark’ is set in a Catholic world. That doesn’t make it a Catholic movie. 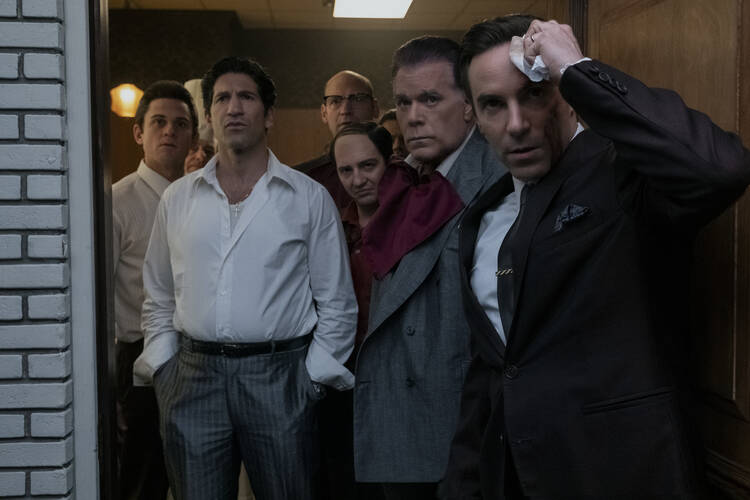 Alessandro Nivola, right, as Dickie Moltisanti in ’The Many Saints of Newark’ (photo: HBO)

The assorted and sordid characters that gave such vivid life to “The Sopranos” during its six-season run were hardly superheroes. They were vicious, craven, ugly, trashy, often stupid and bound to their own hypocrisies. We miss them like crazy. The show was a landmark. It had a mythology. If the HBO series were a Marvel property we would already have seen “The Return of Tony Soprano,” “Son of Tony Soprano” and “The Sopranos vs. the Avengers of East Orange, N.J.” Why let a perfectly good franchise sit around gathering dust? And residuals?

The sound one hears during the “Sopranos” movie prequel “The Many Saints of Newark” is cha-ching! It drowns out everything.

The sound one hears during the “Sopranos” movie prequel “The Many Saints of Newark”—beyond some very predictable dialogue and the period pop music accompanying the Newark riots of 1967—is cha-ching! It drowns out everything. As becomes almost immediately clear, there was no real reason for the movie to have been made, no inspiration for it that was not commercial. According to the spin, “Many Saints” was supposed to explain how young Anthony Soprano became Tony Soprano, mob boss and therapy patient (portrayed so memorably in the HBO series by James Gandolfini, who died in 2013). It is true that the most memorable performance in the film—aside from Vera Farmiga’s turn as Tony’s poisonous mother, Livia—is by Gandolfini’s son Michael, who plays the teenage Tony. But the story isn’t remotely about him.

Set during the aforementioned riots, “The Many Saints of Newark” focuses on Dickie Moltisanti (Alessandro Nivola), a character unseen in the original series but who is father to Tony’s mentee-to-be, Christopher (played by Michael Imperioli in the original). Dickie has his own father issues, which we will get to, but he serves as a loco parentis to young Tony, who exhibits a seemingly congenital talent for trouble but also a conscience, perhaps even an intellect. Dickie discovers Tony reading a Classics Illustrated comic book version of Ivanhoe. Tony explains the plot. “They had Jews in the Middle Ages?” Dickie asks, to which Tony replies, “The Bible…?” It is as close as “Saints” gets to the humor that always permeated the HBO series and gave it much of its humanity.

When it comes to their religion, the criminals embrace the rituals and ignore the meaning.

Written by “Sopranos” creator David Chase with Lawrence Konner (who wrote for “The Sopranos” and “Boardwalk Empire”), “Saints” is more concerned with creating a low-rent Italian atmosphere, telling Dickie’s story as some kind of Oedipal parable and establishing itself as a worthy entry in the Great American Book of Mob Movies.

My favorite among the gratuitous gangster references was the little girl who takes Apollonia as her confirmation name (see: “The Godfather”) but there are many, including the presence of Ray Liotta as Dickie’s marginally mad father, “Hollywood Dick” Moltisanti, who could easily be a grown-up Henry Hill from “Goodfellas.” That he is unhinged becomes evident for many reasons, including the fact that he returns from Italy with the very young Giuseppina (Michela De Rossi) to be his bride. She is a powder keg of Freudian instigation who comes to hate her husband and eventually inspires Dickie to kill his father by smashing his head against the steering wheel of what may have been a new Chrysler Imperial.

At this point, director Alan Taylor’s preoccupation with the violence in the streets of Newark makes sense: Dickie can blame the murder on the riots, which the police—who incited the uprising in the first place—are happy to do. The racial dimension also provides the explanation for the white flight/exodus of Sopranos World into the Jersey suburbs and provides an opportunity for the always wonderful Leslie Odom Jr. to steal some scenes as Dickie’s underling Harold McBrayer. Harold has a lean and hungry look. As he breaks violently with the white mob, he also represents Black America throwing off the yoke of oppression, even if the oppressor in this case is the Mafia (something previously explored in 1972’s “Across 110th Street,” for anyone keeping score).

Review: ‘Mass of the Ages’ uses classic propaganda tactics to make the case for the Latin Mass
John Anderson

That “The Many Saints of Newark” is set in a Catholic milieu is beyond question; “The Sopranos” was, too. In that regard, the one interesting aspect of Mr. Taylor’s film is the relationship, if you can call it that, between Dickie and his father’s twin brother, Salvatore “Sally” Moltisanti (also played by Mr. Liotta), who is in prison for murder. In addition to Liotta delivering a performance of unnerving quietude (as contrasted with his crazed turn as Hollywood Dick), Dickie’s prison visits are like a kind of penance, albeit with Dickie seeking absolution from Sally without actually confessing his sins. He tells the impassive, unbelieving Sally about his desire to do good deeds, and of his charitable works, but not about his act of patricide or any of the other crimes for which he is trying to atone. And never for a moment in the film does Dickie avoid the near occasion of sin.

Sally is an unbelieving audience, silent but all-knowing. Read into that what you will, but it is here that “Many Saints” really does connect to the long legacy of Mafia movies: When it comes to their religion, the criminals embrace the rituals and ignore the meaning. It’s not something that saves the movie. But it is a bona-fide idea.