Review: ‘Mass of the Ages’ uses classic propaganda tactics to make the case for the Latin Mass 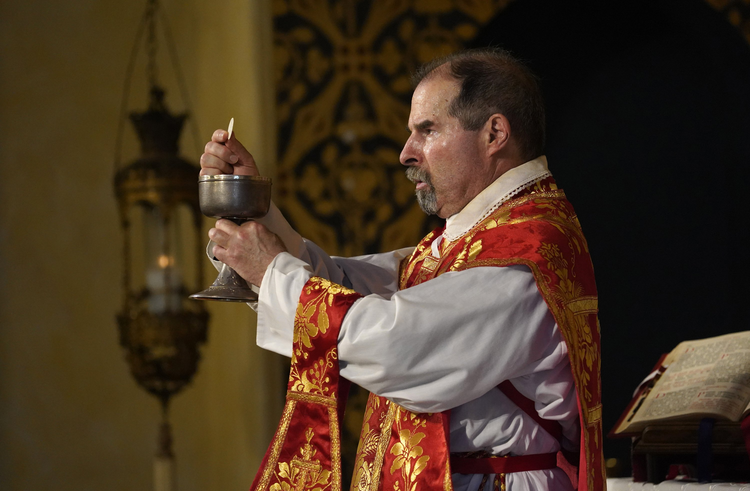 It is not exactly the “Triumph of the Will” of the Latin movement, but “Mass of the Ages” does bear all the hallmarks of classic propaganda: scapegoating, fear-mongering, kitschy theatricality, the use of only enough history to make its case and a complete absence of counterargument. If only the priest would turn his back on members of the congregation, the movie’s logic goes, and recite the liturgy in a language they don’t understand, the pews would be full and the seminaries overflowing. Suicide rates would drop. Divorces would end. No one would be lonely.

It is not exactly the “Triumph of the Will,” but “Mass of the Ages” does bear all the hallmarks of classic propaganda.

To its credit, the rather briskly paced argument for the Latin Mass, directed by Cameron O’Hearn, acknowledges the thing that fuels the burning desire among many to see a return of the “traditional Mass”: aesthetics. The incense and the mystery. Among those who weigh in on the cosmetic pros (there are no cons) of the pre-Vatican II rite is Jimmy Fallon (speaking to Terry Gross on NPR), who remembers being an altar boy, as do several celebrities who appear in the film. None of them (unlike this critic) are old enough to remember serving as an altar boy in Latin. It is pure nostalgia, though Mr. O’Hearn wants to make it something more.

To that end, he opens his film with Kristine Mauss, widowed mother of four, whose husband, Michael, died of a brain tumor last year at the age of 41. She doesn’t quite lobby out loud for the Mass in Latin, but her various appearances in the film serve as tent poles over which O’Hearn can drape the arguments of his allies in the priesthood.

The film is pure nostalgia, though Mr. O’Hearn wants to make it something more.

The members of the clergy and theological community make points about an abbreviated liturgy, the “casual distribution of the Eucharist,” as one priest puts it, and the disappearance of Gregorian chants—but those issues really seem superfluous and irrelevant. But who wants to argue with a young mother of four whose principal goal in life is “walking my children into heaven”?

A film review is no place to make sweeping conclusions about the validity of one Mass over another, and a film critic is not a theologian. But it is difficult to watch an exercise like “Mass of the Ages” and not see its arguments as akin to the paranoid politics, exclusionary worldview and antipathy to change that has displayed itself in so many other arenas of public life. And then there’s the charity of Pope Francis: The pontiff’s attempts to make the Mass both Catholic and catholic as well as unified have been met with the same kind of us-against-them thinking that consoles people whose real problems lay elsewhere and whose double-talk is given a showcase in “Mass of the Ages.” The resistance to an alternate point of view borders on the fascistic.

According to the filmmakers, the movie will be available beginning Aug. 15—the Feast of the Assumption. “Viewers may stream the 40-minute first episode for free at the Mass of the Ages YouTube channel,” the filmmakers said in a statement. “Advanced registration is required by visiting www.theliturgy.org and clicking the ‘get notified’ button. Everyone on this email list will have the chance to watch the live premiere.”

Signing up will also mean getting notified about further installments in what is shaping up to be a series. At the end of the credits of “MOTA” is the following description of Episode 2: “A surprising investigation into the creation of the New Mass and the machinations of Archbishop Annibale Bugnini.”

The archbishop, who held several posts in the Roman Curia including membership on the commission that reshaped the Mass in the wake of Vatican II, was rumored to have been a freemason. Do not think for a moment that the sequel will leave that alone.