‘Father Ted’ poked fun at Catholic Ireland, but only an audience steeped in faith would appreciate it 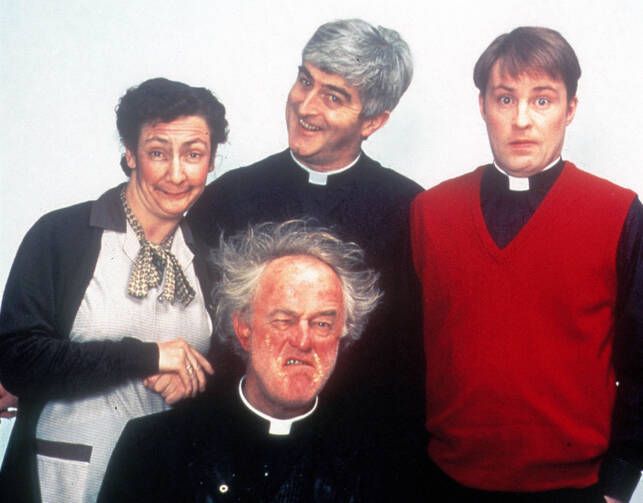 Those four words, one of them a distinctively Irish swear (and much milder than it looks to American eyes) make up nearly all the dialogue of Father Jack Hackett, a grumpy alcoholic priest who fills out the collared trio in the classic sitcom “Father Ted.”

Running for three seasons, from 1995 to 1998 on Britain’s Channel 4, “Father Ted” stars three frankly very bad priests, exiled for various wrongdoings by their bishop to the miserable (fictional) Craggy Island. Poking gentle fun at the church at a time when cracks were beginning to appear in Catholic Ireland, “Father Ted” can be seen as both a relic of an Irish moment and a humorous, but serious, argument against the confessional state.

“Father Ted” can be seen as both a relic of an Irish moment and a humorous, but serious, argument against the confessional state.

Fathers Ted Crilly (Dermot Morgan), Dougal McGuire (Ardal O’Hanlon) and Jack Hackett (Frank Kelly) argue, embarrass themselves and get into various secular, and only occasionally religious, hijinks throughout the show. Dougal mistakes “Papa don’t preach” for a line from the Our Father and excitedly asks Ted, following an outpouring of marital gossip about a parishioner, when the fellow’s next confession is. The trio competes with a parallel crew of terrible priests on the (also-fictional) Rugged Island, where Ted and his longtime feuding partner Father Dick Byrne turn Lent into a “giving things up competition.”

Ted, meanwhile, is the only one who seems to enjoy being a priest: “That’s the great thing about Catholicism,” he says in one episode. “It’s very vague and no one knows what it’s really all about.”

And, in perhaps the series’ surreal comedic high point, Ted loses a bet with Dick, forcing him to kick his fearsome bishop in the rear. A visit is arranged for that very purpose—under the guise of showing the bishop an apparition of himself that had supposedly appeared in the baseboard of the Craggy Island parochial house.

Most of the comedy in “Father Ted” comes not from mockery of the church, but rather from the absurdity of priests in their clerical garments engaging in all sorts of exaggerated, pedestrian activities that have little to do with Catholicism or priestly duties. The humor that is directed at the church may have been somewhat sharp in mid-’90s Ireland, but it reads as playful today.

There are no references to abortion, for example, despite the fact that series co-creator Graham Linehan has advocated for looser abortion restrictions in Ireland. The closest the show gets to mocking actual Catholic belief is a few jokes deriding its stance against birth control, which by the ’90s was pretty standard fare. (In one episode, Ted confronts Craggy Island’s new womanizing milkman—told you this was a screwball comedy—who vexes Ted by asking, “You wouldn’t be advising the use of artificial contraception now, would ya Father?”)

The show’s treatment of bishops is perhaps where it gets the closest to a religious critique of some substance.

There is only one exchange in the show relating to homosexuality, in which Ted, afraid of offending a gay television producer, stammers out awkward praise for the “whole rough and tumble of homosexual activity,” and procedes to nervously equate the church’s stance on the matter to the old belief that the earth was flat. There is also a tame episode on feminism and sexism, and an (ingeniously hilarious) skewering of racism and perceived Irish parochialism.

The show’s treatment of bishops is perhaps where it gets the closest to a religious critique of some substance. Its portrayal of Bishop Len Brennan, who sent the trio off to Craggy Island, is relentless. He shares a luxurious bath with a young woman while berating Ted on the phone (about the latest incident of Father Jack sleepwalking naked). Dougal discovers a VHS home video of Brennan at the beach with his son and mistress—while dressed in full bishop attire. Quoted in an appraisal of “Father Ted” in The Irish Catholic newspaper, a Father Paddy Byrne observes, “Pope Francis would have a lot to say to Len Brennan if he got him over to the Vatican.”

My mother always said that she hoped God had a sense of humor. She wasn’t the only one. As Julia Rampen wrote of “Father Ted” in the New Statesman, “my upbringing among laughing Catholics has always made me suspicious of those who think religion is purely a serious matter.”

Catholic opinions on “Father Ted” are mixed, but largely positive. Some see it as having had a small but active part in the shrinking relevance of the church, while others see it as harmless fun. Even many priests appreciate the show. They are, after all, people, with failures and foibles. And through its wackiness and satire, “Father Ted” humanizes the priesthood in a way, as Ardal O’Hanlon, who calls himself a “Catholic agnostic,” observed. Despite lacking any real pathos, there is a certain gravity, even sadness, to the show’s premise.

The world of an endless pipeline of young seminarians is over in Ireland and the United States alike.

It is rather poignant to think of priests who went almost automatically into their vocation unprepared, perhaps even unbelieving. (The show hints this, in an exchange where Dougal laments, “I wish I weren’t a priest.” How, exactly, he did end up with his collar is never explained.) Yet it’s a mix: That same Irish Catholic article suggests an upshot to the sharp decline in seminarians: “none of today’s seminarians will simply have drifted into the priesthood.”

In any case, the world of an endless pipeline of young seminarians is over in Ireland and the United States alike, and so is the world in which the almost affectionate satire of “Father Ted” was possible. Specifically, it was produced less than a decade before the massive sexual abuse scandal broke in the United States. One episode does have a feminist rock star say of the parochial house, “I hope it’s not some kind of hideaway for pedophile priests; that whole thing disgusted me.” Sadly, whatever “whole thing” she was referring to was a tiny tip of the iceberg. Linehan himself said that, following everything we have learned about sex abuse in the church, “I could never write [Father] Ted now because I’d be so angry my fingers would go through the keyboard.”

Does a sitcom with only the barest connection to actual Catholicism tell us anything today? Perhaps it demonstrates that it is possible to poke fun at what some see as the authoritarian aspect of religion, without being mean-spirited or sacrilegious. “Father Ted” is a mostly good-natured satire of Catholic Ireland. This raises a more important point.

“Father Ted,” in some ways, is a warning against the “integralist” state, against the suffocating, politicized omnipresence of a religion that ultimately must rest on individual faith. The show’s cast of screwball priests—the dancing priest, the priest who breaks things, the gambling D.J. priest, the priest who thinks he’s a monkey, the priest who leads a traveling youth group/dance troupe, the Nazi priest—are meant to be wacky. But they also suggest that when everyone and everything is Catholic, it is difficult to distinguish who and what really is. With shallow universality comes hypocrisy and performative assent. And with that comes disillusionment. And satire.

A faithful Catholic, rather than a jaded former one like Linehan, probably would never have produced “Father Ted.” But only an audience steeped in Catholicism, faithful or not, could fully enjoy it. The era in which Ireland was one of the closest polities in the world to a confessional state is over. The United States never resembled Ireland in that respect, and never will, whatever some boutique pundits advocate. But American audiences can laugh at “Father Ted” nonetheless, and learn its lessons. 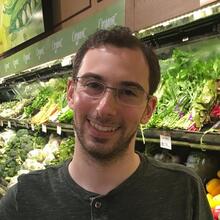