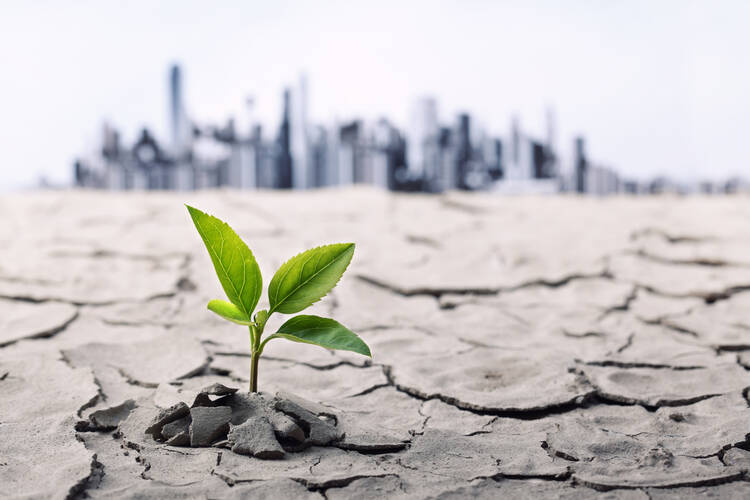 Each fall, I teach a course on vocation to a talented and enthusiastic group of students in my university’s intensive humanities core program. I struggle with how to address what will be the defining reality of their lives: climate change. How do I communicate—without crushing their spirits—how dire our situation is and how much will be demanded of them? While scientific studies reveal our predicament, technology and policy analyses show that a response is still possible. But possibilities are cold comfort in the world of denial and dithering in which my students are coming of age. It is difficult to imagine a path forward.

The Ministry for the Futureby Kim Stanley Robinson

Kim Stanley Robinson’s latest novel, The Ministry for the Future,offers just that: a vision of the coming century honest to the scale of the crisis that offers a plausible path to addressing it. The ministry referred to in the title is a group created according to existing provisions of the Paris Climate Agreement, with the mandate to “advocate for the world’s future generations of citizens” and defend “all living creatures present and future…by promoting their legal standing and physical protection.” The composition of the ministry staff maps the dimensions of the crises we face and the means to address them. The staff includes professionals adept in law, economics, ecology, earth, ocean and atmospheric sciences; disaster and refugee specialists; and an expert in artificial intelligence.

‘The Ministry for the Future’ offers a vision honest to the scale of the crisis that offers a plausible path to addressing it.

The Ministry for the Future is a hopeful novel, despite opening with a harrowing account of a severe heat wave in India. In this crisis, the overtaxed power grid fails, leaving a vast population with neither air conditioning nor water. Tens of millions die. These events take place…in the next five years.

Robinson is an accomplished author of “hard” science fiction—writing that attempts to imagine the future in light of realistic constraints and technological possibilities. He is best known for his 1990s Mars trilogy, which imagined the terraforming of the red planet and, somewhat infamously, inspired the dreams of planetary escape by Silicon Valley billionaires. Alas, the trilogy’s use of St. Hildegard of Bingen’s notion of the Holy Spirit’s work of viriditas, or “greenness,” as the guiding vision for a biologist character devoted to bringing life to the barren planet has had less impact.

Robinson’s 2015 novel Aurora—published within months of the release of the papal encyclical “Laudato Si’”—offers a very different take on our planetary destiny, perhaps intentionally challenging the uses to which his Mars series has been put. The novel flips the well-worn science fiction plot of interstellar colonization. After a multigenerational expedition arrives at the Tau Ceti star system, the colonists discover the inseverability of Homo sapiens’s connection to Earth, and struggle to return to the planet upon which we evolved. As he wrote in an essay published with the release of the book: “There is no Planet B.”

The novel portrays in great detail how economic and financial systems both contribute to the climate crisis and obstruct solutions.

Robinson studied with the American Marxist literary theorist Fredric Jameson, and his fiction has long wrestled with Jameson’s observation that “it is easier to imagine the end of the world than the end of capitalism.” (Try it and see.) This insight about literary imagination threatens to become the reality we bequeath to our children as we careen ever deeper into climate disruption and ecological collapse.

The Ministry for the Future portrays in great detail how economic and financial systems both contribute to the climate crisis and obstruct solutions. Economic doctrines can obscure reality. As one character says about a demanding plan to slow glacial melt: “Look, if you have to do something, you have to do it. Don’t keep talking about cost as if that’s a real thing. Money isn’t real. Work is real.”

Central to the novel is one of the most daunting economic obstacles to addressing climate change: “stranded assets.” We can burn only a fraction of the current proven reserves of oil, gas and coal to stay below global warming of 1.5 or even 2 degrees Celsius. The owners of these trillions of dollars in assets have fought and will continue to fight policies that will render them worthless. Robinson explores the idea (put forward by the geo-hydrologist and civil engineer Delton Chen) of a “carbon coin” as a solution. This proposes an alternative reserve currency, coined in payment for foregone profits from carbon extraction. Such a solution would convert these trillions of dollars in losses into potential profits and also provide a way of reimbursing countless smaller actors, such as farmers in developing nations managing their fields, for carbon drawdown. This would require a coordinated reorientation of the entire global financial system. The crises and negotiations that bring this reorientation about are central drivers of the book’s plot.

Robinson forces us to reckon morally with the scale of violence our indifference and indecision will cause.

The book is not only about policy; it attentively portrays the lives of climate migrants, enslaved persons and the technocrats who run the ministry. Survivors of the story’s heat wave in India demonstrate the role climate trauma will play in the culture and politics of this century. Key among the survivors are The Children of Kali, a militant group born of India’s grim knowledge that rich nations care little for the suffering their emissions cause poorer ones. With meticulous planning and untiring tenacity, they fight to end high-emission industries and consumption—usually with violence, often with genius. “Kali sees all. And the Children of Kali are not going away until the guilty are gone. Be advised.”

The work accomplished by sabotage and terror is challenging. It forces us to reckon morally with the scale of violence our indifference and indecision will cause. Future generations will suffer from our inaction on a scale that far eclipses the 20th century’s mass genocides. What level of action and sacrifice on our part would be required to prevent such a turn to violence for the sake of our victims yet unborn?

One chapter stands out as luminescent. It portrays the roll call of a future international conference on ecological restoration. Page after page is filled with nothing but the introductions of organizations from every corner of the world working to save and restore their lands and ecologies. Robinson leaves unspoken that all of these groups actually exist and are already undertaking this great work.

In an influential article entitled “Beyond Hope,” the radical environmentalist Derrick Jensen argues against hope in the face of environmental destruction: “Hope is what keeps us chained to the system.” For him, hope is the opposite of action—the sort of thing we do when seated in the passenger seat, not when we are behind the wheel. Thomas Aquinas’s definition of hope, in contrast, is intrinsically connected to action. Hope is patient expectation and work for a “bonum futurum arduum”: a difficult future good. Robinson’s The Ministry for the Future is a work of hope in precisely this sense.

This article also appeared in print, under the headline “Future Shock,” in the August 2021, issue.

Vincent Miller is Gudorf Chair in Catholic Theology and Culture at the University of Dayton. He is the author of Consuming Religion: Christian Faith and Practice in a Consumer Culture.