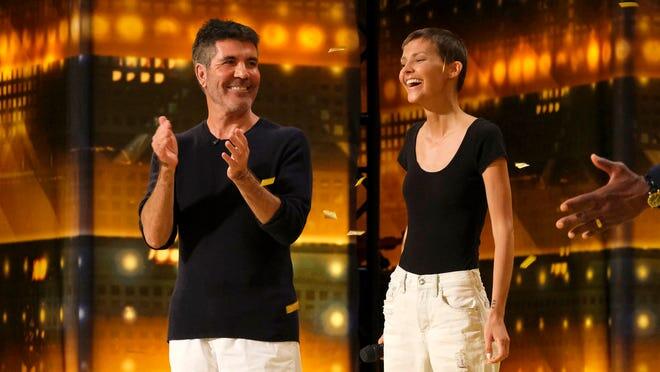 God of our life, there are days when the burdens we carry chafe our shoulders and weigh us down; when the road seems dreary and endless, the skies gray and threatening; when our lives have no music in them, and our hearts are lonely, and our souls have lost their courage. Flood the path with light, run our eyes to where the skies are full of promise; tune our hearts to brave music; give us the sense of comradeship with heroes and saints of every age; and so quicken our spirits that we may be able to encourage the souls of all who journey with us on the road of life, to your honor and glory.

In early June, a young woman named Jane Marczewski stepped onto the stage to audition for “America’s Got Talent.” She told the judges that when she sings, she goes by the name Nightbirde. She also told them, somewhat as an afterthought, that she is battling a kind of cancer that gives her a 2 percent chance of survival. Having known the dreary road and gray skies described in Augustine’s prayer, she stepped up to the microphone to sing brave music.

And as she sang, it seemed as if all those watching her glimpsed eternity. The judges stared in awe. With her own soft musical recording backing her, Nightbirde sang her original song called “It’s OK.” She told them the song was about the last year of her life.

I moved to California in the summertime
I changed my name thinking that it would change my mind
I thought that all my problems, they would stay behind
I was a stick of dynamite and it just was a matter of time, yeah.

Listening to her, I was struck by this symptom of the human condition—one that Augustine knew well. We change our names, our jobs, our cities. We think this will be the change that we need. But no matter where we go, there we are. We can never get away from ourselves. And if, as Jane says in her song, we do not address the real problems inside, the ones that exist on the soul level, well then...it’s just a matter of time. Our problems will catch up to us eventually. But even that—the pain that snowballs into an avalanche—is an example of God’s mercy. Because that is where he meets us.

And as she sang, it seemed as if all those watching her glimpsed eternity.

We are lost. And that’s okay. God wants us as we are. He has offered himself on the cross and in the sacraments, especially the Eucharist and the sacrament of reconciliation, so that we don’t have to hide—from him or from ourselves. We can present ourselves as we are, lost and broken and bruised, to be met with his mercy. We encounter more pain, though, when we rely on ourselves to fix what seems broken in our lives. When we simply move somewhere new, or try to white-knuckle our way through our troubles, we are just hiding. And to this, Augustine says, “Beware of despairing about yourself: you are commanded to put your trust in God, and not in yourself.”

Nightbirde recognizes the habit of trying to fix things on one’s own. She sings, “Don’t know why I take the tightrope and cry when I fall.”

In a later verse in “It’s OK,” Nightbirde shows this self-awareness and recognizes the habit of trying to fix things on one’s own. She sings, “Don’t know why I take the tightrope and cry when I fall.” Why do we make things harder on ourselves? We have a God who waits for us.

In a recent guest blog post, Jane reflected that “I have had cancer three times now, and I have barely passed thirty. There are times when I wonder what I must have done to deserve such a story. I fear sometimes that when I die and meet with God, that He will say I disappointed Him, or offended Him, or failed Him. Maybe He’ll say I just never learned the lesson, or that I wasn’t grateful enough. But one thing I know for sure is this: He can never say that He did not know me.”

Jane describes the pain she has experienced, the low places of despair where she has lived, and the tears that have become her prayers. And yet, with stunning wisdom, she professes that God has been with her in the low places. That’s where she met him. (And that’s where Augustine met him, too). She writes, “I have seen Him in rare form. I have felt His exhale, laid in His shadow, squinted to read the message He wrote for me in the grout: ‘I’m sad too.’”

Jane realizes that, even in the suffering caused by her cancer, there is mercy.

That is the God we have. The one who is sad with us. The one who carries our crosses with us. Jane realizes that, even in the suffering caused by her cancer, there is mercy. “It’s not the mercy that I asked for, but it is mercy nonetheless,” she says. “And I learn a new prayer: thank you. It’s a prayer I don’t mean yet, but will repeat until I do.” This, too, sounds like Augustine discussing the virtue of hope in his Tractates on the first letter of John (Tract r: PL 35, 2008-9) when he says, “because at present you cannot see, make it your business to desire the divine vision.” If we are so deep in our suffering that we cannot thank God yet, or feel as though we cannot yet see, we can pray to be able to.

As Nightbirde’s song ended, it became quiet again until suddenly applause erupted. Eternity still hung in the air. Jane looked out expectantly at the judges. Howie Mandel, Sofia Vergara and Heidi Klum all gushed about her authentic presence and her beautiful voice. Then Simon Cowell echoed them as he became emotional. At that moment, Jane softly said, “You can’t wait until life isn’t hard anymore until you decide to be happy.” Simon was visibly moved by her wise words, and yet he said he would not give her a “yes” for her audition. Instead, he gave her what is called a golden buzzer, which fast-tracks her straight to the show’s final performances.

Every song on the Hillbilly Thomists’ new album could be a homily (including ‘Bourbon, Bluegrass, & the Bible’)
Mary Grace Mangano

Since the golden buzzer moment, Jane’s life has been transformed; her audition went viral, making her a household name. But in fact, her song and her message have transformed those who heard them. She understands that, while fans now know her name, God knew her name all along, as He knows each one of our names.

As Jane says in her Augustinian way, “I have heard it said that some people can’t see God because they won’t look low enough, and it’s true. Look lower. God is on the bathroom floor.”

We are a pilgrim people, lost and restless and wandering. But it’s all right. God walks next to us, with us. It’s O.K.