Review: ‘Lourdes’ (the documentary) is much more than miraculous 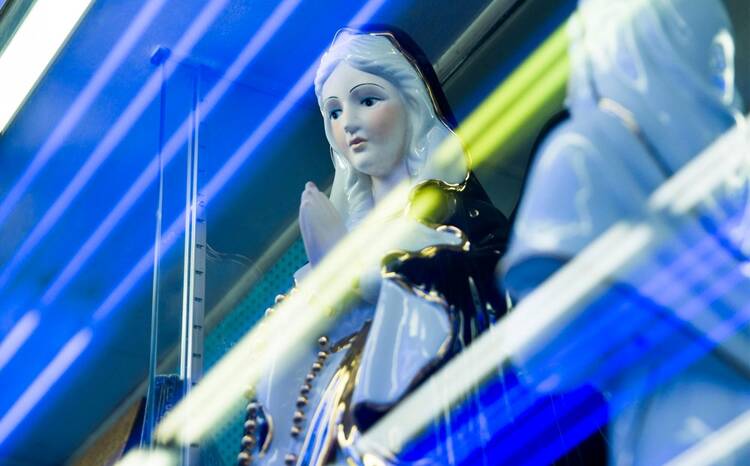 It is tempting to use the word “miraculous” to describe “Lourdes,” Thierry Demaizière and Alban Teurlai’s quasi-mystical portrait of the French holy site, and it wouldn’t be excessive to do so. But it does seem a bit glib regarding a film of such dignity, charity and profundity—and one in which hope is made so palpable.

Filmed during the 2017 Feast of the Assumption—a time when even more than the usual thousands descended upon the site—“Lourdes” occasionally suggests a Bruegel-esque migration of the faithful, always hopeful and often hobbled, arriving at what they expect will be their physical and even moral repair. They are a fraction of the estimated 6 million who descend yearly on the village in southern France where, between Feb. 11 and July 16 of 1858, the 14-year-old Bernadette Soubirous witnessed 18 apparitions of the Virgin Mary in the Massabielle Grotto.

Thousands of otherwise inexplicable cures have been unofficially credited to the site; 70 miracles attributed to Our Lady of the Immaculate Conception—who was revealed at Lourdes—have been recognized by the Vatican, and Bernadette was canonized in 1933. Lourdes is synonymous with divine intervention.

The simple vastness of some images in the film is inspiring—the hordes swarming before the camera becoming emblematic of the faith that spurs them on, against what would seem to be overwhelming obstacles, including their own disabilities. Some of the action is captured casually, even offhandedly—the hospital at Lourdes, for instance, where young nurses, male and female, cheerfully bathe, clothe and encourage their temporary patients, the “infirm pilgrims” who suffer the most extreme handicaps. How the passengers on the bus-sized ambulance that transports them got to be the way they are is never explained, but one can make assumptions. These are not people whom medical science considers salvageable.

The simple vastness of some images in the film is inspiring—the hordes swarming before the camera becoming emblematic of the faith that spurs them on.

Here and there, we get to eavesdrop on personal histories: the roofer who fell onto a pile of rocks; the spurned lover who attempted suicide twice and lived; the priest who every year hosts a group of Parisian prostitutes, praying to mend their ways. The entirety of Lourdes is portrayed as a place of tenderness and caring, a Christian ideal that is presented without comment or judgment—not even the kind of inadvertent judgment that camera movement is capable of making.

Had “Lourdes” conformed to this kind of cinema-verité approach throughout, it would have been a different movie, not necessarily a worse one. “Lourdes” isn’t selling anything—plenty is for sale in the gift shops, which the film makes a point of scrutinizing—but as counterintuitive as it might seem, this makes it a riskier film: The faithful will see “Lourdes” as a wide-screen endorsement of their Catholic belief. Unbelievers might well view the entire endeavor at the Massabielle Grotto—where the ailing anoint themselves with the moisture they wipe from the black stone walls—as an exercise in futility. The blind do not see and the lame do not walk in “Lourdes.” There is what might be a minor miracle toward the film’s conclusion, but this is beside the point of the film, which is hope and its power to propel.

Without the narrative structure that Demaizière and Teurlai impose on their documentary, they would have made an art film, and that clearly wasn’t the intent (despite the impressionistic feel of so much of the movie). The film follows, intermittently, six supplicants as they prepare for their trip to Lourdes and shows us what they find there. They include a father of two ailing boys, one too sick to travel, the other carrying his younger brother’s teddy bear as a kind of proxy to the Blessed Mother; a transvestite prostitute tormented by his work who is granted his wish to serve as an altar boy during Mass at the basilica; Cedric, who as a boy wandered out of his house and was hit by a car, and now seems to be a child in a man’s wheelchair-bound body. (That his mother’s recollections are heartbreaking will come as no surprise.) One man, stricken with A.L.S., or Lou Gehrig’s disease, makes an eloquent testament of his faith and hope.

There is an unglamorous pageantry to “Lourdes,” whose cast of characters arrives at the grotto as spiritually eager as they might be physiologically despairing. All are remarkable; some are more distinctly memorable—the nursing instructor, for instance, who tells her team of caregivers, “Make them look nice for the Holy Virgin!” Or another woman, woefully observing the sheer numbers awaiting holy intercession: “So many—she can’t help everybody. It’s like the lottery...”

Or the overweight girl whose father describes her as suffering horrible sores that we never see. What she really needs, it seems, is not to be bullied at home or to be used by her father as an object of pity, but no one ever said the halt and the lame were the only people the Blessed Virgin was calling, when she came calling at Lourdes.