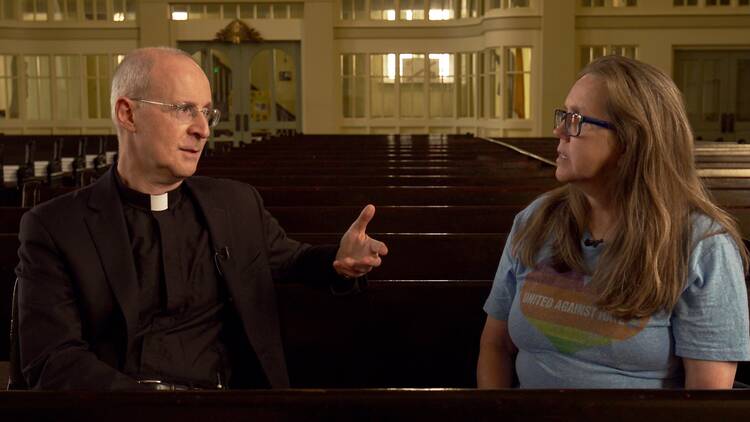 James Martin, S.J., speaks with Christine Leinonen before a talk at St. Ignatius Church in Baltimore, Md., in a scene from "Building a Bridge." Ms. Leinonen's son Drew was murdered in the Pulse Nightclub shooting in Orlando in 2016.

“Nothing converts like stories,” says James Martin, S.J., during “Building a Bridge,” a kind of documentary offspring of Martin’s 2017 book of the same name. That book put him at the epicenter of the conversation about L.G.B.T.Q. Catholics and the church. “When Jesus is asked ‘Who is my neighbor?’” the Jesuit priest tells one congregation in the film, “He doesn’t say ‘Here are the 10 points that make a neighbor.’ He says, ‘A man was going down to Jericho …’”

In the James Martin story, the man was going down into the social-media hellmouth to face off against self-righteous indignation and a bottomless well of vitriol. It is not quite a parable. But it could possibly spark a few conversions.

The directors Evan Mascagni and Shannon Post have taken a tip from Martin—and Jesus—in their briskly paced, somewhat calculating but very loving film, which does not just delve into the issue of gays in the church but into the New York-based priest who has made himself, however reluctantly, the issue’s poster boy. A onetime “corporate tool” and late-inning Jesuit, Martin has attracted the kind of venom among self-proclaimed “true Catholics”—those who seem to believe a more unforgiving and wrathful church would bring people back into it—that only proves the point of his ministry: God is about love. And God’s love is not just about who you love.

“An L.G.B.T. person shouldn’t be surprised to hear they're welcome in the church,” Martin says. But of course, they often are totally shocked.

In the interest of full disclosure, I have known James Martin for a number of years, and was grateful to “Building a Bridge” for allowing me to actually spend some time with him. Following its subject from one speaking tour to the other, from churches and homes to the garden he maintains atop the Jesuit residence in Manhattan, the portrait rendered is of a man so at peace with himself he calms the souls of others.

Christine Leinonen, whose son was murdered in the Pulse nightclub massacre in Orlando, Fla. on June 12, 2016 (the event that inspired Martin’s book), says as much after their meeting together in Bethesda, Md. The people who line up to get books signed, or perhaps merely want the “eighth sacrament”—the “sacrament of selfie,” as one Irish Franciscan describes it—seem happy to have heard words about acceptance, charity and tolerance coming from a representative of their faith. “An L.G.B.T. person shouldn’t be surprised to hear they're welcome in the church,” Martin says. But of course, they often are totally shocked.

The unwelcoming are given their share of screen time in “Building a Bridge”—too much, with the result that the documentary seems to lose track of its narrative at certain moments. But that is a filmmaker’s gambit, to give them enough rope to hang themselves: Listening to the likes of Michael Voris of Church Militant long enough, one is guided to the conclusion that their fixation on sex acts says much more about them than about anyone wanting simple acceptance from the Catholic Church. And, by the way, when it comes to making an argument from scripture, the Book of Leviticus is the last refuge of the intellectual scoundrel.

It might be another stratagem, but the people in “Building a Bridge” who want to build a bridge are the happy people in the movie. All editing is selective, but the people lining up to protest Martin’s various public appearances seem profoundly unhappy. The lady complaining about “baby yoga” because the infants are being indoctrinated into Hinduism was my favorite extremist. But there is a selection.

Even these people might want to watch this movie. They might not be converted. But there is a good chance they will feel better. No one will need a degree in theology, or even a familiarity with the film’s subject, to find “Building a Bridge” a thought-provoking experience, and a warmly engaging one.