Every song on the Hillbilly Thomists’ new album could be a homily (including ‘Bourbon, Bluegrass, & the Bible’) 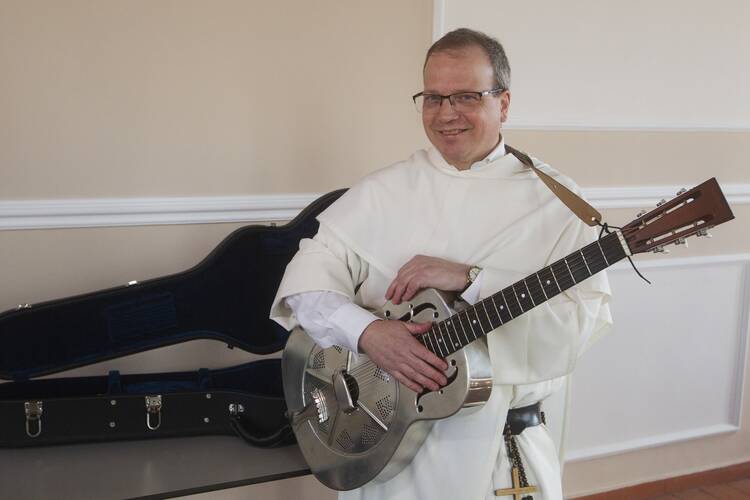 I am not someone who typically listens to bluegrass or country music, but I am a Flannery O’Connor fan. So I came to the latest album by the Hillbilly Thomists “Just as I Am,” as one of the record’s songs says. I have not been able to stop listening to “Living for the Other Side” since.

The Hillbilly Thomists are a band of friars from the Order of Preachers, otherwise known as the Dominicans. The group began as a creative outlet for two Dominican priests, Fathers Austin Litke and Thomas Joseph White; other brothers joined in to play music just for fun. The group kept growing—eventually enlivening house events and the streets of Washington before they officially recorded their first album, released in 2017. “Living for the Other Side” was recorded over 10 days at a Dominican retreat house in the Catskill Mountains and dropped on the feast of Saint Thomas Aquinas, Jan. 28, 2021. Proceeds from album and merchandise sales support the formation of friars at the Dominican House of Studies in Washington.

This new album—mostly original music, with just one cover—offers true preaching. It uses everyday language and opens up the Gospels for deeper application in everyday life. Each song could be a homily. Listening amid the cacophony of construction and sirens blaring outside my apartment window, I am transported to a Southern front porch, sipping sweet tea (or bourbon). Yet I am also reminded of quiet chapels where the faithful stop to pray amid the incense.

Once the encounter with Jesus is personal, he moves quickly. We move quickly, and we want to hear His voice more.

The album begins with a soft meditation on the parable of the 10 virgins from Matthew 25 in “Keep Your Lamps Trimmed.” Listeners hear: “Bridegroom’s coming soon/ Ain’t got no time to waste.” The counsel is urgent, the tone is gentle. It is a reminder, as the album itself suggests, that we are living for the other side and not for this world. “You do not know the day/ And you do not know the hour,” the friars sing with just a guitar to back them. Musically, it is a simple song—focused on God’s great mercy.

Other songs on the album have more fast-paced melodies; the heart of the music itself is an homage to Southern life and sound. The very next song, “Our Help Is in the Name of the Lord,” begins with a cry: “O God, come to my assistance/ Lord, come to my help/ The waters have reached high/ They’re up to my neck,” and the swift tempo matches the desperation of the lament. Not for the first time while listening, I thought of Johnny Cash, especially when the friars sing, “My foes compass me about/ They blaze like a fire.” (Towards the end of the album, the song “You Will Still Walk Down the Line” also reminded me of the Man in Black—not just because of the title, but the singing-that-sounds-like-talking.)

These are songs for our moment and our humanity. The plucking of a banjo and a lone voice feature in the third track of the record, and the alliterative song has a thesis: “When it’s a question of love and survival/ Bourbon, bluegrass and the Bible.” It squints at a life of hard living and observes, “People on the left, people on the right/ They don’t need beer to get into a fight/ Everybody’s out in their disguise/ The light in the morning just hurts my eyes.” This feels extremely resonant for our time.

Other songs on the album also hold themes that speak to the challenge of life: “Chasing Money No More” and “Hard Times.” The former gives a lyrical reminder that “Everything eventually turns to dust/ All the possessions eventually rust/ The things of the Spirit are the only things to trust” and a chorus that simply says, “Everybody’s interested in paradise/ Till they find out it doesn’t always feel nice/ And I ain’t gonna spend my time chasing money no more.”

These songs acknowledge the human desire for comfort, popularity, success and love, yet also the human tendency to seek it in places that are finite and cannot satisfy like the eternal can.

If the album were a homily, its message is to remember that we are called to something higher.

I find the lyrics in the friars’ songs to be poetic, humorous and truthful—a rare combination. I appreciate the nod to O’Connor’s first novel Wise Blood (and to one of her most famous short stories, “Revelation”) in the line from “Heaven or Tennessee” that quips, “Gonna trade my revolutions for revelations/ Trade my electric guitar for wise blood.” Yet, in the same song, the last verse could be a poem on the mysterious, miraculous, merciful power of God:

You can make the angels cry
Make the stars fall from the sky
Punish the wicked and justify
Send out the vine and purify
Bring down the grace like a summer rain
Make the heart without stain
Speak the word that's left unsaid
Burn the world and raise the dead.

Like “Keep Your Lamps Trimmed,” another biblically-inspired song is “Jericho Blues.” This one relates the story of Zacchaeus, the petite tax collector who climbed a tree to see Jesus. The lyrics, again, are clever and poignant: “Short on stature, short on faith/ But I hear You make the difference up/ You can make it up all the way.” Grounded in the first person, we are Zacchaeus when we sing, “Well, I heard You call my name/ Like I never heard before/ So I’m coming down quickly/ I want to hear Your voice some more.” Once the encounter with Jesus is personal, he moves quickly. We move quickly, and we want to hear His voice more.

The second half of the album is more overtly spiritual, prayerful and psalm-like. There is a beautiful and haunting rendition of the hymn “I Heard the Voice of Jesus Say,” and possibly my favorite song on the album, “Lead Me by the Hand.” It evokes the lives of the best sinners-turned-saints and especially reminds me of Saint Augustine, or even Saul-turned-Paul: “So won’t You lead me by the hand/ When I’m blind and I can’t find a place to stand/ All is sin, all I’m doing is sinking more/ Waiting for You to lead me by the hand.” Later, it recalls Thomas Merton, when a verse cries:

“Jacob’s Ladder” is a call-and-response with background guitar and banjo. Listening, I was brought back to mornings when my mom woke me and my sisters by singing “Rise and Shine (And Give God the Glory)” because several verses in, we hear: “Oh, rise (rise)/ Shine (shine)/ Give God glory.” This version doesn’t include clapping. It is a simple imperative instead, and one that sounds a lot like Jesus’s call to “Follow me” or “Feed my lambs.”

“Living For The Other Side” is not the gun to the head that O’Connor’s “Misfit” advocates, but maybe it can have the same effect if we listen carefully.

The album ends with the song I mentioned first: “Just As I Am.” It is slow, like being cradled or rocked in someone’s arms, a guitar strummed lightly. The vocals are soulful and deep. Quietly, one voice sings, “Just as I am,/ though tossed about/ With many a conflict, many a doubt/ Fightings within and fears without/ O Lamb of God, I come.” I find myself thinking about receiving the Eucharist. How do I approach? Just as I am, asking the Lamb of God to take me in my broken state.

With the year we have had—in a pandemic, encountering social, racial and political tension, isolation and more—I have welcomed these lyrics, and I have welcomed them getting stuck in my head. They mix with my own prayers. And when I catch myself humming any of them, I’m reminded that yes, I’m living for the other side.

If the album were a homily, its message is to remember that we are called to something higher. Sometimes we become jaded or we live on autopilot, and forget that our actions—even the small ones—matter. Like David Foster Wallace’s 2005 commencement speech to the graduating class at Kenyon College, the album can be a “this is water” moment. Wallace stated in his speech that there is no such thing as atheism: We decide every day what we worship. “The really important kind of freedom involves attention and awareness and discipline, and being able truly to care about other people and to sacrifice for them over and over in myriad petty, unsexy ways every day,” Wallace said. He ended the speech emphasizing how difficult it is “to stay conscious and alive in the adult world day in and day out.”

“Living For The Other Side” is one way to stay conscious and alive, and to be reminded of what we are worshipping. It’s not the gun to the head that O’Connor’s “Misfit” advocates, but maybe it can have the same effect if we listen carefully.