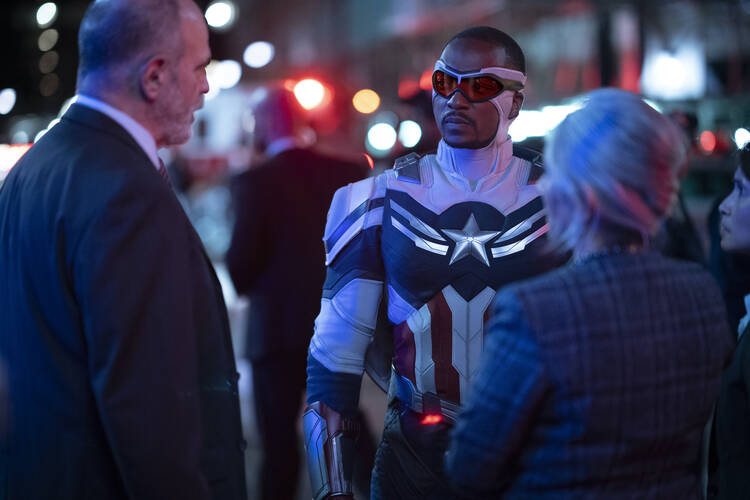 Anthony Mackie as Sam Wilson/Captain America in 'The Falcon and the Winter Soldier' (Photo: IMDB).

After successfully rescuing a hostage for the U.S. Air Force, superhero Sam Wilson, a.k.a. the Falcon (Anthony Mackie), arrives home in Delacroix, La., to try and help his sister secure a loan. They are attempting to save their parents’ fishing business from its financial troubles, and Sam is convinced that he can grease the wheels with the local bank because of his status as an Avenger.

Instead, what happens is all too familiar to a great number of Americans. The white bank clerk can’t quite place where he knows Sam, a Black man, from, but concludes that he must have “played for LSU.” Sam diplomatically corrects him and eventually the clerk figures out that he is a superhero. Despite asking to take a selfie with him, the clerk still denies Sam and his sister the loan.

The scene, toward the end of the first episode of “The Falcon and the Winter Soldier,” encapsulates the thesis of the show. Even in the Marvel Universe, the fact that you’re a celebrity (or a superhero) cannot override the essential facts of being Black in America.

This exploration of race is integral to the show, a limited series that recently concluded on Disney+. It makes a commitment to examine the realities of race, class and creed in the modern world, and what they specifically mean for the individuals who are fighting to make that world a better place.

Sam spends almost the entire show running away from his own destiny. At the end of “Avengers: Endgame,” Steve Rogers, the previous Captain America, gives his shield away to Sam and tells him that it is his turn to take up the mantle of Captain America. However, believing that no one can live up to Steve’s legacy and that the world is not yet ready for a Black man to wear the stars and stripes, Sam donates the shield to the Smithsonian. Instead of becoming a museum piece, however, the Department of Defense takes the shield and assigns it to John Walker (Wyatt Russell), who becomes the new, state-sanctioned Captain America.

Even in the Marvel Universe, the fact that you’re a celebrity (or a superhero) cannot override the essential facts of being Black in America.

Walker, a chiseled, blonde-haired, blue-eyed white man, looks on the surface much like Steve Rogers, but he turns out to be insecure and paranoid, though well-intentioned. The Winter Soldier, Bucky Barnes (played by Sebastian Stan), chastises Sam for giving away the shield and refusing to be Captain America.

Bucky, who has suffered his own trauma as a formerly brainwashed assassin, represents the show’s exploration of veterans’ issues. He has constant nightmares about his past sins, has violent urges and lies to his therapist about his mental health. Only Steve believed in him and, now that he is gone, Bucky is in search of a place to belong, where his trauma can no longer hurt him.

Sam and Bucky, the Falcon and Winter Soldier, make an odd couple, but their banter is what makes the show’s action sequences work. What might otherwise turn into mediocre schlock is elevated by the chemistry between the two leads. Slowly, they discover that there is more to the other than meets the eye.

Bucky introduces Sam to Isaiah Bradley (Carl Lumbly), a minor but integral character, an until-then unknown Black superhero who was active during the Korean War. After embarking on an unsanctioned mission to rescue other Black soldiers, Isaiah was imprisoned by the U.S. government for 30 years despite his service to his country, leaving him in a pit of disillusionment.

Isaiah’s origins hail from the comic book Truth: Red, White, & Black by Robert Morales, in which hundreds of Black soldiers are experimented on in order to create the next Captain America. That comic is based on the Tuskegee Syphilis Study, when the United States Public Health Service and the Centers for Disease Control and Prevention tested the effects of syphilis on 600 impoverished sharecroppers in Alabama. The study was carried out for forty years, from 1932 to 1972, with President Bill Clinton eventually offering an apology on behalf of the country. “What the United States government did was shameful,” said Clinton, “and I am sorry.”

For Isaiah, the idea of a Black Captain America is laughable, and at first only reinforces Sam’s belief that he made the right choice in rejecting the superhero mantle. But John Walker, Steve Rogers’ inferior replacement, places all of that in jeopardy.

It manages to be, at once, a sequel to multiple entries in the Marvel Cinematic Universe, a very expensive-looking action movie in the form of a six-part miniseries and a meditation on modern racial animus in the United States.

Sam, Bucky and John Walker are on the trail of the “Flag Smashers,” a group of superpowered extremists bent on erasing borders and nation-states. Their motives are encapsulated in their motto: “One world, one people.” The Flag Smashers are portrayed sympathetically and, more often than not, Walker’s Captain America turns out to be more of an obstacle than these ostensible terrorists are. More to the point, the group’s leader, Karli Morgenthau (Erin Kellyman), is a mixed-race woman who dreams of one day becoming a schoolteacher. One of her fellow Flag Smashers says that the world needs a hero who “looks like them” and not someone like Captain America.

When Walker kills a surrendering Flag Smasher in cold blood, it becomes clear to Sam and Bucky that the lines between friend and foe are not as clear-cut as they might have hoped. They strip Walker of the shield and Sam has to confront his inevitable destiny of becoming Captain America, while Bucky finally lets his guard down enough to find a home with Sam and his family.

“The Falcon and the Winter Soldier” is more than the sum of its parts. It manages to be, at once, a sequel to multiple entries in the Marvel Cinematic Universe, a very expensive-looking action movie in the form of a six-part miniseries and a meditation on modern racial animus in the United States. It wears a lot of hats and juggles no shortage of characters and themes. It does not always succeed in saying everything it wants to say (the Covid pandemic cut down the show’s filming schedule, which can be felt in its sometimes odd pacing and editing). But it is important that a show like this, which will be watched and rewatched for years to come, is tackling these issues.

Case in point: After Sam becomes Captain America, he takes Isaiah to the same Smithsonian exhibit created to honor Steve and his shield. There is a new section, one dedicated to Isaiah and the injustices he suffered as a Black man and a Black soldier. The exhibit exposes the crimes and negligence of the U.S. government and reveals the truth to the public. Isaiah is left in tears and embraces Sam.

“Now they’ll never forget what you did for this country,” Sam says. “Never.”