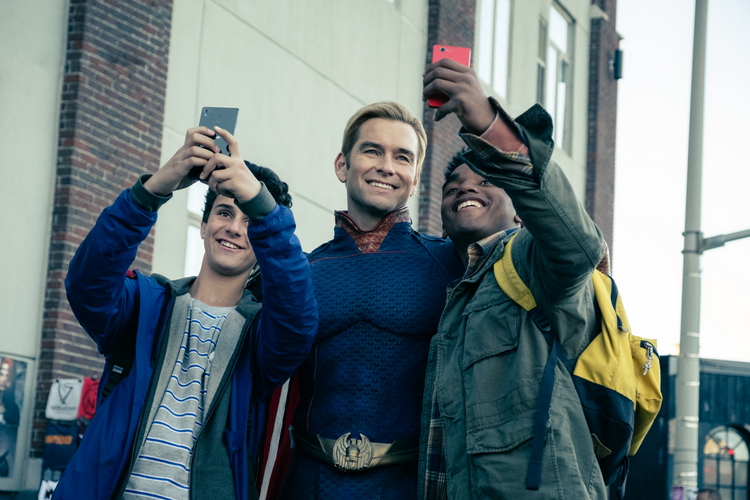 Is there anything new to say in superhero stories at this point? I say this as a fan who not only lines up to see each new Marvel extravaganza on its opening weekend but is eager to get the latest issues at comic book stores every Wednesday. (For those interested: Aquaman and Mera have had a baby, the X-Men now have their own country, Superman has publicly come out as Clark Kent, Thor just killed Galactus and it turns out Captain Marvel has a Kree half-sister who is a lot like her, just blue.)

I have watched all the Netflix Marvel shows and most of the D.C. Comics shows, too (and probably always will). But it mostly feels like it has all been done.

‘The Boys’ gleefully satirizes every aspect of superhero movies by showing how corrupt all-powerful beings would be if they existed in the real world.

In the abstract, “The Boys”—Amazon’s ultra-violent “The super heroes are secretly super villains” twist on D.C. heroes—only reinforces that feeling. Superman-analogue Homelander presents as a noble and much-beloved protector of American values, but in private he is a homicidal sociopath who terrorizes everyone with whom he comes in contact; Wonder Woman-analogue Queen Maeve is queer but closeted because she is afraid Homelander will kill her lover. Flash-analogue A-Train accidentally kills a girl running while he is high. It’s 1990s-era Tarantino meets comic books, with all that the gore and gallows humor that entails.

Then our world changed. And with it the show, which finished its second season last week, has gained unexpected relevance. One oft-cited aspect of that relevance is the new season’s introduction of Stormfront, a social media-savvy millennial who can manipulate electricity; she is secretly a white supremacist trying to recruit the aptly-named Homelander to her cause of protecting “our culture.”

“The Boys” argues that we should take a look at who and what we valorize in our stories.

But that storyline’s resonance is superficial next to the fundamental fact that “The Boys” is about what it is like to live in a world that is beyond our ability to control. A world that has people with superpowers in it is a world where anything can happen at any time and there are no truly enforceable rules. Every win achieved by “the Boys”—a group of normal humans trying to take down “the Seven” (their superhero antagonists) and the massive corporation that backs them—is immediately spun back upon them into bigger, deeper losses.

Our own circumstances in the United States right now feels the same. People with power seem to be doing whatever they want, regardless of the rule of law, and getting away with it. Not even a world crisis seems to tame them. We are talking right now about the possibility that a president of the United States could lose an election and refuse to leave office. We have long since entered the era of a life stranger (and scarier) than fiction.

Our imaginations are a garden. If we seed them with violent, powerful white men, those are what are going to grow.

And for as much as “The Boys” is known for its violence, what makes it meaningful right now are the little moments of humanity it offers in between the action sequences: characters sharing a meal or a bed, telling stories of the people they love or things they are afraid they might lose. It is a show about people trying to protect and reunite with those they love. It is a nightmare because they have so little power. But that reality also makes the few moments they have together so much more precious. In the face of catastrophe, who and what is actually important becomes so much clearer.

At a time when we are being confronted by dark forces of authoritarianism and white supremacy in our country, “The Boys” also asks important questions about the superhero genre itself. With the notable exception of the recent “Wonder Woman” and “Aquaman,” D.C. has long since turned away from its initial burst of Christopher Reeve-hopefulness in favor of a scary nihilistic fascism within which white supremacy sits as not a bug, but a feature.

Marvel, meanwhile, revels in turning superheroes into “guys like us,” trying to live lives not that different from ours, struggling to fulfill their responsibilities and above all trying to do good. It is an approach that wins hearts and sells tickets, for sure. But these films also tend to ignore everything and everyone else around the heroes; they promote a technicolor Spandex version of the Great Man theory, where the only figures that matter—other than perhaps to set the story in motion—are a small set of individuals with special powers who, no surprise, are almost entirely straight white men.

People ask themselves how our country got to the point where it chose a leader like Donald Trump. “The Boys” argues that we should take a look at what we valorize in our stories, and how much we paint the world in terms of strength and (zero) pigmentation.

Our imaginations are a garden. If we seed them with violent, powerful white men who take authority into their own hands and are celebrated for it, those are what are going to grow.