Review: Seeking ways to engage in an ailing world 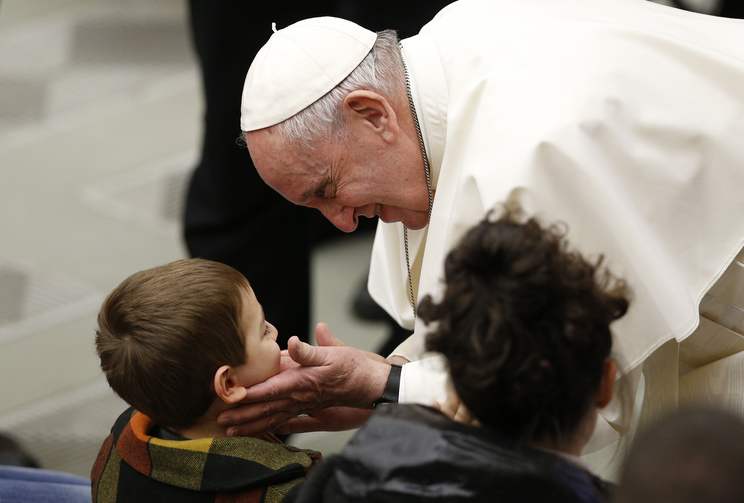 Pope Francis greets a boy as he meets the sick and disabled during his general audience at the Vatican on Feb. 20, 2019. (CNS photo/Paul Haring)

I frequently wish when I read an encyclical that the pope who promulgated it had read and cited a figure that does not appear in the footnotes. In“Pacem et Terris,” for example, I wish Saint John XXIII had cited Dorothy Day. Pope Francis would have done well to draw on the groundbreaking work of Elizabeth Johnson on “ecological conversion” when drafting “Laudato Si’.” In “Fratelli Tutti,” he should have first consulted Marcus Mescher.

The Ethics of Encounterby Marcus Mescher

Readers of both the encyclical and Mescher’s new book, The Ethics of Encounter,will wonder if the two authors had been planning a simultaneous publication all along. While the two texts hold many salient themes in common, the hinge of both is exactly the same: an exegetical account of the pericope from the Gospel of Luke in which Jesus tells the story of the good Samaritan. Mescher reminds us that in providing this narrative, “Jesus challenges his followers to see in a way that recognizes the need around them and to respond by doing what they can, no more and no less.”

This volume makes clear what the most pressing contemporary social injustices are, ranging from immigration to domestic violence, from “social sorting” to homophobia, from racism to poverty. Mescher presents the reader with impeccable and impressive research (both theological and interdisciplinary) to remind us of what ails our world.

Rather than despairing over these realities, Mescher is clear that “change starts with me.” Even though this could be daunting for the individual reader, Mescher gives a blueprint through five virtues to which he constantly returns in the second half of the book: courage, mercy, generosity, humility and fidelity. In proposing these virtues to us, Mescher also presents examples of those who have lived exceedingly virtuous lives. The reader will see Mescher’s most passionate writing in a section outlining the work and ministry of Gregory Boyle, S.J. and Homeboy Industries.

While there were some sections of the book that might not be suitable for undergraduate discourse, the vast majority of this book is ideal for college students. I will be adopting this text for future semesters in my own teaching. In particular, my students and I will be challenged by Mescher’s reflection on the virtuous use of digital technology, one of many concrete suggestions he gives in these pages. In addition to classroom use, parish book clubs will love this volume. My hunch is that Pope Francis would, too.

Daniel Cosacchi is assistant professor of religious studies and director of the justice and peace studies program at Marywood University (Scranton, PA). He is co-editor of The Berrigan Letters: Personal Correspondence between Daniel and Philip Berrigan (Orbis, 2016).

@dcosacchi
Provide feedback on this article
Join the conversation: Login or create an account
Before you can comment, you need to update your profile to include your first and last name, as required in our comments policy. Then reload this page and you'll be set up for commenting. Update your profile