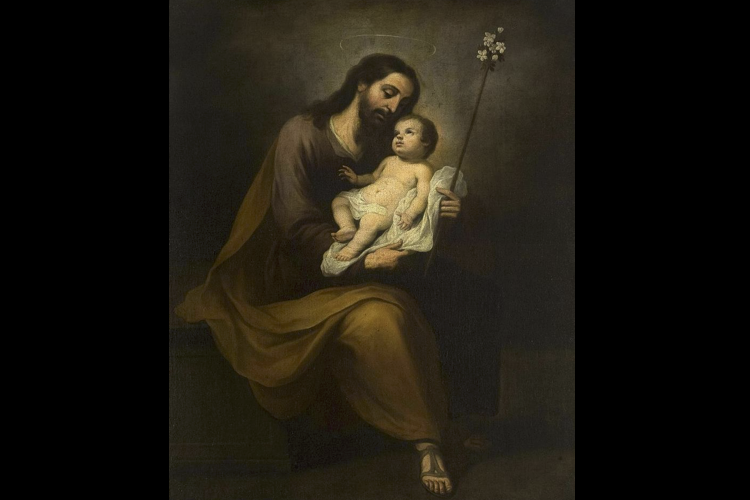 “Joseph with the Child and the Flowering Rod,” by Alonso Miguel de Tovar (Wikimedia Commons)

With over 75 million cases and nearly two million deaths from Covid-19 worldwide, coupled with economic and geopolitical strife, the year 2020 has been bleak. We are a people who have been desperately looking for hope—for a light at the end of the tunnel. And relief seems to be on the horizon. It is all the more fitting that such a light should shimmer in the distance during the Advent season. The vaccines to combat Covid-19 gives a temporal sense of hope the world has been longing for.

We are a people who have been desperately looking for hope—for a light at the end of the tunnel. And relief seems to be on the horizon.

On Dec. 18, 2020, the Oxford Philharmonic Orchestra, in their annual Christmas performance, celebrated not just the “Hope Bearer” but specifically the scientists in their community who helped to develop one of the Covid-19 vaccines now being distributed worldwide. Performed in Oxford University’s storied Sheldonian Theatre, the concert mixed classic carols with more contemporary pieces, interwoven to deliver an unmistakable message of hope and gratitude.

Marios Papadopoulos, the founder and music director of the Oxford Philharmonic Orchestra, noted that, in the season of hope conquering despair, it is important to highlight the successes in these troubled times. “Earlier in the year, on a Thursday evening at 8 p.m., we gathered on the streets of London and applauded the N.H.S.,” Mr. Papadopoulos said in an interview with America, referring to the British National Health Service. “And I thought ‘Why not celebrate our own team in Oxford?’ At the time, little did we know that they would have achieved and published their results.”

“Other than paying homage to their efforts,” he continued, “we now pay homage to their achievement.” The performance featured remarks from H.R.H. Princess Alexandra, the German violinist Anne-Sophie Mutter and a special performance of the Adagio from Johann Sebastian Bach’s Violin Sonata No. 1 in G minor, by the Russian violinist Maxim Vengerov.

The Oxford Philharmonic Orchestra celebrated the scientists in their community who helped to develop one of the Covid-19 vaccines.

The performance also featured a new Christmas carol by the English composer and conductor John Rutter. “Joseph’s Carol,” dedicated to the “foster father” of Jesus, specifically draws on the narratives of the uncertainty and worries St. Joseph must have felt en route to Bethlehem.

“Joseph is the character in the Christmas story who most often gets overlooked and passed over, and I always feel rather sorry for him,” Mr. Rutter said during the program. “He must have felt he was treading a very long, dark road and not knowing what was at the end of it.”

“But at the end of that long, difficult journey a miracle took place, and that’s what my carol is all about—a miracle which will never be forgotten,” he continued. “Joseph’s Carol,” and the entire performance, was specifically dedicated to the team of scientists at Oxford—a “musical thank you,” as Rutter put it.

“I love the concept of Joseph, on the journey, not knowing where it leads,” noted Mr. Papadopoulos. “And at the end there is a miracle in a way that chronicles the journey of the scientists.”

The carol fits perfectly into the moment—tying the journey of the Holy Family two millennia ago into the anxieties and worries of today.

The carol, performed by Sir Bryn Terfel, as soloist, and the choir of Merton College, fits perfectly into the moment—tying the journey of the Holy Family two millennia ago into the anxieties and worries of today. “Long and weary was the journey/ Hard and dark the road we trod/ Deep enfolded in the stillness of the night” begins the carol. But the voice of God, ever present and ever encouraging, moves Mary and Joseph onward to Bethlehem, so that he, the King of Kings and the Lord of Lords, might be born among the poor and meek to save us all. The angels sing out, and hope is brought into the world. Out of the darkness and uncertainty, Mr. Rutter reminds us in“Joseph’s Carol,” emerges a miracle.

The release of “Joseph’s Carol,” a moving tribute in and of itself, coincides with Pope Francis’ declaration of the Year of St. Joseph (2020-21). As Pope Francis wrote in the apostolic letter “Patris Corde”: “The spiritual path that Joseph traces for us is not one that explains, but accepts…. Joseph is certainly not passively resigned, but courageously and firmly proactive. In our own lives, acceptance and welcome can be an expression of the Holy Spirit’s gift of fortitude.”

Mr. Rutter’s “Joseph’s Carol” evokes much the same sentiment: that the path is difficult and unsure, enveloped in shadows and doubts, but with faith and hope we shall meet the miracle of God and find a new day of rejoicing. We shall make it through this long winter and enjoy summer once more.

Nicholas D. Sawicki
@NicholasSawick1
Show Comments ()
Join the conversation: Login or create an account
Before you can comment, you need to update your profile to include your first and last name, as required in our comments policy. Then reload this page and you'll be set up for commenting. Update your profile