Behind the Baby Yoda memes, ‘The Mandalorian’ asks a deeply religious question: Is anyone beyond redemption? 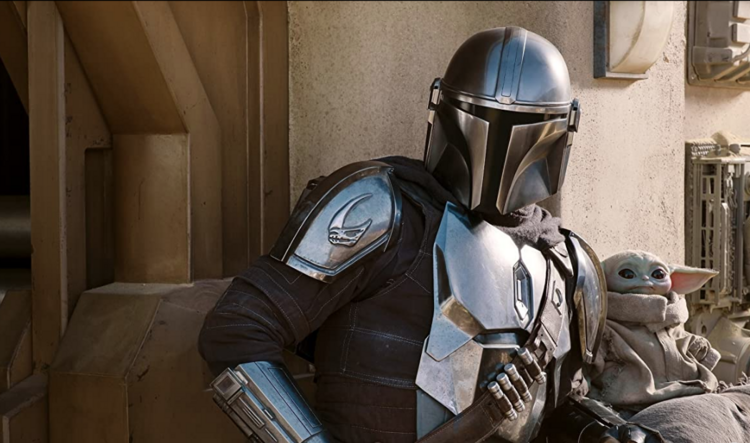 The Mandalorian and "Baby Yoda," two of the main characters in the series by Disney+.

Early in the second season of the Disney+ mega-hit Star Wars TV show “The Mandalorian,” the internet’s Very Good Boy Baby Yoda tries to eat his way through the unfertilized eggs of a Frog Lady, who is risking everything to get them to her husband. It is played for laughs at first, with Mando trying his best to keep Baby Yoda away from the eggs. But as the child keeps finding ways back into the eggs, it grows more and more uncomfortable to watch.

In a second season filled with show-stopping moments (The return of Boba Fett! The live-action debut of Ahsoka Tano! The spooky appearance of Luke “Needs No Introduction, Just Your Child” Skywalker!), that incident seems like just a blip on the screen, more like shooting womp rats in your T-16 than facing down the Empire.

Hidden amid its meme-ready moments, “The Mandalorian” is quietly investigating the inadequacy of our ideas about each other.

The series’s big twists have provided great distraction at a time when we all so desperately need it, as well as offering a fascinating glimpse into the work of weaving together art and commerce. How do you tell a compelling ongoing story set in the Star Wars universe that is not about Luke Skywalker and his posse? How do you also craft that story as a jumping-off point for lots of other stories, with the original Star Wars saga of films having finally been finished?

Creator Jon Favreau and his team have succeeded largely through a combination of simplicity and guile that would make Han Solo proud. Each episode is inspired by a different storyline worthy of a Hollywood western—The Big Heist; Save Our Town; Prison Break—and offers some of the cleanest, most streamlined storytelling you will find on television today.

But how to thread the needle of being both fresh and enormously commercial? How about by featuring a protagonist that looks an awful lot like one of the most popular Star Wars characters of all time, and adding a co-star that is the “Muppet Babies” version of Yoda? Give them each a backstory connected to different aspects of the bigger Star Wars universe and a purpose that will enable us to meet all kinds of new people and worlds, and you are on your way. This month’s announcement from Disney of two new shows spinning off from “The Mandalorian,” as well as seven other Star Wars TV projects in the works, is the fruit of that labor. Personally I am as excited about it all as a Wookie playing space chess.

Creator Jon Favreau and his team have succeeded through a combination of simplicity and guile that would make Han Solo proud.

But the thing that makes “The Mandalorian” worth talking about has a lot more to do with tadpoles than tentpoles. The Star Wars saga invested heavily in the exploration of redemption—Is anyone past help? Can forgiving one person save the whole universe? What about forgiving yourself?

Hidden amid its meme-ready moments and reveals, “The Mandalorian” is quietly investigating an idea of its own—not redemption per se but the inadequacy of our ideas about each other. Over and over in the series we are presented with characters whom we judge to be villain or hero only to be later shown to be both. “Good guys” like former Rebel commando Cara Dune (Gina Carano) turn out to have done some very bad things in their past. Meanwhile, an antagonist such as assassin and former Imperial Army sniper Migs Mayfield (Bill Burr), who betrays the Mandalorian the first time they meet, later risks everything to punish the Empire for the way its armies slaughtered his men.

The Mandalorian himself (Pedro Pascal) is a stone-cold bounty hunter who finds himself incapable of letting Imperial scientists have their way with the baby he was hired to capture. As the series progresses he keeps discovering within himself even greater willingness to sacrifice what he holds dear to care for that child. Not only are others different from what we may conceive of them, we ourselves may not be who we thought we were.

Over and over we are presented with characters whom we judge to be villain or hero only to be later shown they are both.

Sometimes the corrections offered are slight. The governor holding a city in slavery turns out to have embraced the Empire after watching her entire people become massacred by enemies during the Clone Wars. But knowing that is not enough. She is still horribly in the wrong now.

Likewise, in the finale, Baby Yoda’s kidnapper Moff Gideon (Giancarlo Esposito) notes that the Mandalorian’s allies have likely murdered every single person on the ship they have met. It is no surprise; stormtroopers always get shot. They are the bad guys here. But what does it mean to kill them without a second thought, once we recognize they are human beings, too?

The series suggests that we are all in fact sentient beings of infinite value, but dangerously constrained by our points of view. And so in the Frog Lady episode, there are in fact three different family units in play—the Frog Lady and her eggs; the Mandalorian and Baby Yoda; and the newborn spider babies and their mother who threaten them all.

“The Mandalorian” suggests that we are all in fact sentient beings of infinite value, but dangerously constrained by our points of view.

With their overwhelming numbers, hideous appearances and single-minded drive to devour everything, the spiders seem very clearly to be monsters. And yet they are just doing the same thing Baby Yoda has been doing all episode. “Monsters” and “food” prove to be just words assigned to creatures whose sentience and value we do not yet recognize.

It is no coincidence that, in the end, what saves Mando and his charges is not his enormous ingenuity, but the New Republic pilots whom he had previously written off as antagonists (and who had viewed him as the same).

‘The Mandalorian’ is an indictment of religious violence, and a celebration of pluralism.
Jack Jenkins - Religion News Service

On “The Mandalorian,” everyone is challenged to see past their blinders to the humanity of others, and usually past personal trauma as well. Many of the characters in the series are the victims of horrors that continue to motivate them. Cara Dune had her entire planet destroyed by the Death Star. The very zen Kuiil (Nick Nolte) was enslaved by the Empire for hundreds of years.

Even Baby Yoda himself, it turns out, does not communicate or use his powers to their fullest potential because of the suffering he endured after the purge of the Jedi. His plight captures the cost and journey of trauma—how it disconnects us both from others and ourselves, and how it leaves us as children in need of help that we might come to new life.

Favreau paints with a much gentler brush than the Star Wars films. You can easily view “The Mandalorian”as just a great Saturday morning popcorn and soda pop serial. But for two years now, along with great capers and commercial opportunities, he has been telling a story about the shared humanity and pain found beyond our differences. And that is anything but a matter of a long time ago in a galaxy far, far away.

More from America:
— What comedians and Catholics have in common: They need to tell the truth.
— With ‘Evermore,’ Taylor Swift becomes beautifully unpredictable
— An Advent playlist featuring David Bowie, Joni Mitchell and, yes, Chance the Rapper