Yes, Netflix’s ‘The Queen’s Gambit’ is worth the hype 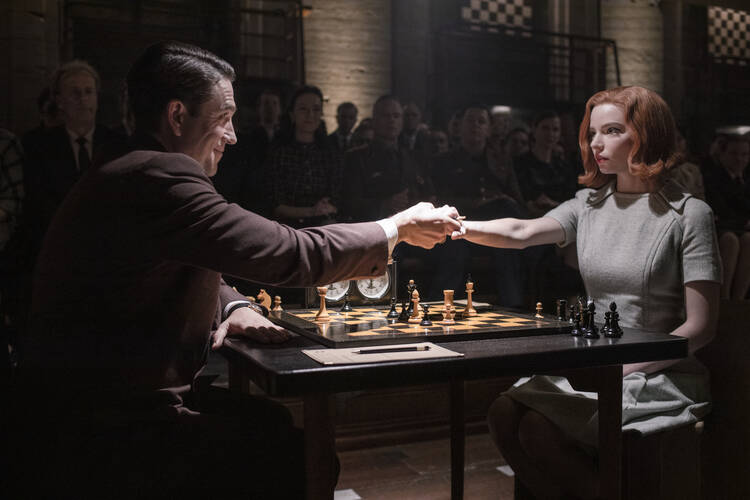 Chess isn’t just a game, it’s also a handy metaphor—for braininess, for power, for geopolitical strategy, to name a few things it is often used to symbolize. In “The Queen’s Gambit,” the sleek, eminently binge-able limited Netflix series about a female chess prodigy in the 1960s, it is all these things.

We follow a willful young woman, Beth Harmon, from her girlhood in a stark Kentucky orphanage, through fraught relationships with a foster family and the clubby male world of chess competitions, all the way to a standoff in Soviet Russia with the game’s world champion. It is both a classic Cinderella-story sports narrative and a very American rags-to-riches tale of meritocracy.

What it is not is chess-like in its plotting. Though based on Walter Tevis’s 1983 novel, the seven-episode series unfolds at a pace closer to that of open-ended episodic television, lavishing time on “Mad Men”-like period detail and interpersonal intrigues that don’t necessarily fuel the central drama. For a time it seems to be a Dickensian fable of privation and perseverance, then the tale of an unlikely but nourishing mother-daughter bond, and later the story of a lonely, troubled genius who can’t sustain healthy human relationships.

Indeed, the show may be best enjoyed as a compendium of story tropes, more beautifully embodied than cogently written. Uli Hanisch’s production design is flawless, not only in conjuring exotic high-end locales, from Mexico City to Moscow, but also in evoking the texture of less exalted spaces, from Beth’s orphanage to the grotty New York basement apartment of a fellow chess master. The chess matches themselves are tautly staged and shot throughout, and are apparently quite plausible (grandmaster Garry Kasparov was an advisor on the series).

It is both a classic Cinderella-story sports narrative and a very American rags-to-riches tale of meritocracy.

At the center of the show are at least two extraordinary performances: that of Marielle Heller as Alma, the unhappy alcoholic housewife who adopts Beth and forges an alternately warm and transactional relationship with her, and that of Anya Taylor-Joy as Beth, a gamine with an edge who is constantly overturning the low expectations of others. The episodes in which these two form their arm’s-length relationship are the show’s best, not least because Heller’s Alma gives us a portrait of thwarted mid-century American womanhood that is both heartbreaking and oddly touching; when we see her glued to a hotel TV, marinating in one of a series of cocktails, we see the social waste but also a kind of self-possession. Alma is a pathetic figure in many ways, but Heller locates her core of dignity and humanity.

If Beth never seems quite as grounded in reality, it is partly because she is by design something of a fairy-tale heroine. From her backstory with a suicidally depressed birth mother to her “Beautiful Mind”-like facility for chess, from her on-and-off addictions to tranquilizers and booze to her impeccable fashion sense even in dissolution, she is never quite of this world.

Taylor-Joy—a striking, spiny actor who looks a bit like Emma Stone as conceived by Margaret Keane—is the other reason Beth never seems remotely everyday. If I wanted to indict “The Queen’s Gambit” as a case of the male gaze run amok, I would have ample ammunition in the way director Scott Frank goggles at Taylor-Joy’s every turn. As compelling and cogitative as her performance is, the show often seems content to fixate on her beauty. And while there are certainly references to the sexism of the period, the central conceit of Tevis’s novel—to imagine a Bobby Fischer-like chess superstar emerging from humble American beginnings, but simply to flip his gender—is not accompanied by a meaningful reckoning with that gender switch, and the series follows suit. This is no more a show about feminism than it is about Cold War politics, another large theme it merely grazes.

Are any of these reasons not to sit back and relish the feints and parries of “The Queen’s Gambit”? Not really. In addition to the pleasures I’ve noted, it has Bill Camp as the walrus-like janitor who is Beth’s reluctant chess tutor and Moses Ingram, who manages to elevate a superfluous, tokenistic “Black friend” role. And as an advertisement for the game at its center, the show has been a total success with me: I recently dusted off my paperback copy of “Bobby Fischer Teaches Chess.” Binge-watching, after all, isn’t the only diversion suited for these quarantine times.