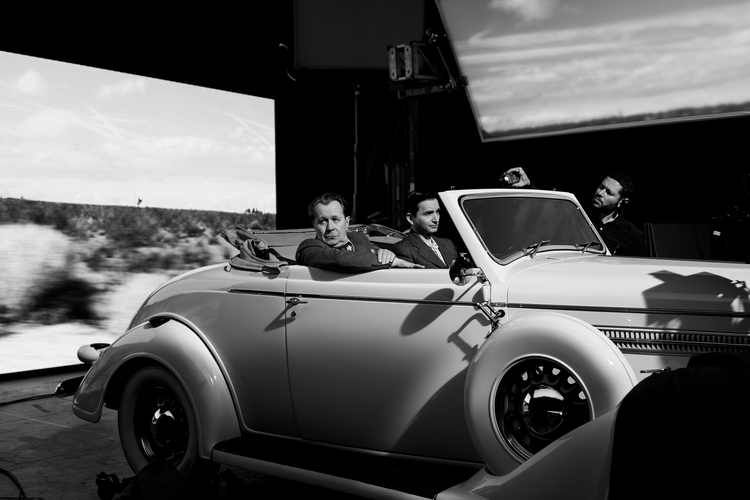 The protagonists of classical drama weren’t alcoholics, as far as we know, so any effort to frame the life of Herman J. Mankiewicz as Greek tragedy would fall a few drinks short of a doctoral dissertation. Mankiewicz was certainly a victim of hubris—along with being a screenwriter, bon vivant, epic drunk and now the subject of David Fincher’s “Mank”—but his was a pride inflamed, and unleashed, by Scotch. If he hadn’t written the screenplay to “Citizen Kane,” he might have ended up on the ash heap of cinematic history, along with the small crowd of other transplanted New York wits and drinkers who made ’30s Hollywood comedy a thing of intelligent, bygone beauty.

There is no way not to see “Mank” as a tale of self-destruction and professional suicide.

To imply here that Mankiewicz single-handedly wrote what is often considered the best script ever produced in Hollywood is to buy, wholesale, into Fincher’s take on the “Citizen Kane” story, one that seems lifted in its entirety from Pauline Kael’s long-discredited “Raising Kane,” a 50,000-word essay written as a foreword to The Citizen Kane Book of 1971. The fabled film critic for The New Yorker took the position that Mankiewicz had been solely responsible for the script, with little assistance from the film’s presiding genius, Orson Welles, who never sued Kael but might have if he hadn’t had enough problems—to which was added Kael’s close-to-libelous and apparently plagiarized assessment of his legacy.

However, as Fincher obviously knows, it makes a better story to have his title character a solitary hero waging artistic war against the moral philistines. (The screenplay is credited to the director’s late father, Jack, who died in 2003.) They range from Welles himself (Tom Burke) to MGM’s boorish Louis B. Mayer (Arliss Howard) to, of course, William Randolph Hearst (Charles Dance), the newspaper mogul on whom Charles Foster Kane was so venomously modeled. In addition to reading the Kael piece, because it offers a lot that is relevant about people and places, what a “Mank” viewer should be alert to is its achievement not just as a movie about a movie, or even moviemaking, but about the mechanics of cinema and storytelling.

Mankiewicz was certainly a victim of hubris, but his was a pride inflamed, and unleashed, by scotch.

This is revealed not just in the way Fincher uses the high-flying black-and-white cinematography of Erik Messerschmidt to evoke Gregg Toland’s moody work on “Kane,” or the suggestions we hear of Bernard Hermann’s original score, but in the way “Mank purposefully defies the formulaic treatment of the human condition that was beginning to take over and neuter the kind of moviemaking Mankiewicz and his compadres had championed in the ’30s—stories of complicated people of often questionable judgment.

Which describes Mankiewicz himself, of course. Mank is sympathetic, as was Kane, or neither of their films would have been watchable. But there is no way, even with the kind of brio bestowed on Mankiewicz by the perennially brilliant Gary Oldman, not to see “Mank” as a tale of self-destruction, professional suicide and, again, hubris. Aptly enough, “Mank,” like “Kane,” swings back and forth in time. The present is represented by the writer’s work on the “Kane” screenplay, holed up in Mrs. Campbell’s Guest Ranch in Victorville, Calif., 65 miles from Los Angeles with his leg in a cast and not enough booze.

He gets his booze and is allowed to drink it—despite the protestations of his very proper British secretary/typist, the real-life Rita Alexander (Lily Collins)—through the intercession of his nurse, Frieda. She reveals, to Rita’s astonishment, that Mank saved Frieda and her entire village by paying for their escape from Nazi Germany. Is that a true story? I couldn’t find references to it, but again, this is a movie and as narrative asides go, it is one that certainly redeems our habitually caustic hero.

Elsewhere “Mank” flashes back to various episodes in its subject’s halcyon days in Hollywood, where he was surrounded by other Algonquin Round Table wits and an industry too vulgar not to attract their disdain—something Mankiewicz takes no pains to conceal. This does not bode him well, of course. But it is the thing that is supposed to make him heroic. It does, even if the portrait painted by “Mank” also makes him petty, vindictive, something of an intellectual bully and a guy in love with his own sense of humor. This does not make him conventional. But it certainly makes him real.