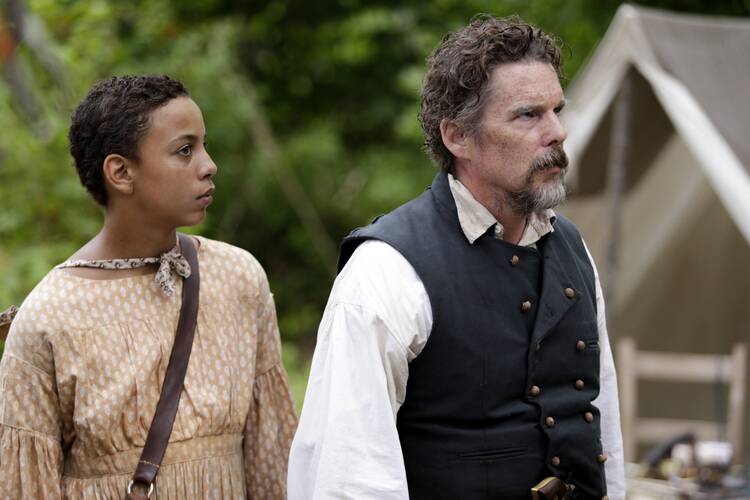 Now is an uncomfortably apt time to be contemplating political violence in the United States, for reasons I hardly need to spell out. Which is probably why the Showtime limited series “The Good Lord Bird,” for all its unexpected ebullience and knockabout comedy, sticks in the craw.

This is as it should be, I think. A story of the abolitionist John Brown—who seized the Virginia armory Harpers Ferry in 1859, an act of domestic terror that may have helped precipitate the Civil War—should never go down easy. Both his animating cause, anti-slavery, and his method of action, gunfire, run straight to the heart of America’s most toxic contradictions. Was Brown’s cause just? Undoubtedly, but his tactics? “The Good Lord Bird,” based on James McBride’s tricky, capering 2013 novel, is not about to settle that question. Instead it takes for granted the story’s mythic scale, as if this were an American Passion Play we all know the paces of, and riffs on it from an odd, often clarifying angle, creating its own pop-culture mythology along the way.

The John Brown of “Good Lord Bird” is a sincere holy fool who also happens to be heavily armed.

The story’s narrator is an enslaved adolescent, Henry, who through a comical series of misunderstandings is mistaken by John Brown for a young girl and nicknamed Onion. He ends up traveling with Brown’s ragtag posse under this guise, never able to correct the misapprehension about his gender, even though many of those he encounters—especially other Black folks—see through his costume immediately. He is there as Brown and his men execute the horrifying Pottawatomie massacre in “bleeding Kansas,” and with him on trips to the North to meet Frederick Douglass and to Canada to meet Harriet Tubman, where Brown passionately but somewhat haplessly tries to raise funds and recruit troops for an armed insurrection.

And Henry/Onion is there for the disastrous raid and standoff at Harpers Ferry, which in the series’ telling acquires the last-stand shootout feel of an old Western. There is even a freeze-frame moment that unmistakably tips its cowboy hat to the ending of “Butch Cassidy and the Sundance Kid.”

‘The Good Lord Bird’ runs straight to the heart of America’s most toxic contradictions.

As Brown, Ethan Hawke is transformed beyond recognition, with luminous gray wolf eyes and a frizz of hair and beard framing his constantly dirty, freckled face. The actor leans heavily into both Brown’s tenderness and his fury, modulating from a whisper to a scream, and from a quiet prayer to a fiery sermon, to make Brown seem both human and otherworldly. We can see clearly why some people were drawn to him and others repulsed. And in his scenes with Douglass, played with majestic pique by Daveed Diggs, we see the abolitionist dilemma illustrated in terms that feel very contemporary: Is a righteous cause compromised by the crazy fervor of some of its adherents? More pointedly, can a white man really understand the high stakes for Black folks of joining a violent insurrection? Douglass, like others Brown tries to lure to his cause, is echoing John Lennon’s formulation: You say you want a revolution; we all want to see the plan.

The series’ quality of bumptious irreverence is its most vivid and diverting quality. If a few violent montages, set to rousing, anachronistic gospel and soul tunes, skirt the edge of taste, the overall lack of sanctimony—the familiar take-your-medicine tone that seems to accompany many renderings of slavery and racism—is bracing. And it makes the series’ second episode, “A Wicked Plot,” stand out all the more: Onion, separated from Brown’s posse, finds work in a tavern across from a slave camp and gets entangled in the camp’s internecine politics, inadvertently thwarting a rebellion planned by the fiercely quiet Sibonia (Crystal Lee Brown).

If “The Good Lord Bird” blows away some of the saintly air around John Brown, so much the better.

The scene in which Sibonia placidly explains to a goodly white minister why he and his family would be the first victims of her planned insurrection—and how she could live with the guilt of that slaughter if it would free her people from generations of torture and subjugation—felt to me like the diamond-hard heart of “The Good Lord Bird.” This is the argument, distilled to its terrible essence, later enacted in a war that would cost the nation some 600,000 lives: Violence will be answered, and America’s enslaved people were already generations deep in a one-sided conflict that for them meant a dehumanization worse than violence.

There is another unavoidable element in the John Brown story, arguably the central one: his openly religious inspiration. Quoting Scripture in the midst of battle, praying to God for guidance, indeed claiming a direct line to the Almighty and His will—the John Brown of “Good Lord Bird” is a sincere holy fool who also happens to be heavily armed. His apocalyptic theology reminded me of one of James Baldwin’s insights, that Black folks heard and embraced the Old Testament’s tales of exile, liberation and prophecy in a uniquely pointed way; abolitionists like Brown obviously saw their cause in similarly Mosaic terms.

In a slightly cynical, arm’s-length way, “The Good Lord Bird” affirms this lineage, as when Onion realizes that “Old Man Brown” looks “exactly the way white folks picture God” and reasons that this is the method in Brown’s madness: White Christians would follow him in a way they never would Nat Turner. Indeed, Brown’s martyrdom—he miraculously survived the raid to write furious letters for the cause before being spectacularly hanged—was the key to his legend, and to the hagiography that followed.

If “The Good Lord Bird” blows away some of the saintly air around John Brown, so much the better. The marriage of religion and violence, even when it is on the right side of history, has a troubling legacy, especially in the United States. As the writer Michael Ventura once wrote, “America is the Bible running wild in the wilderness.” The question that haunts us now might be put this way: Have we tamed that wilderness?

[Read this next: What ‘The Lord of the Rings’ can teach us about U.S. politics, Christianity and power]