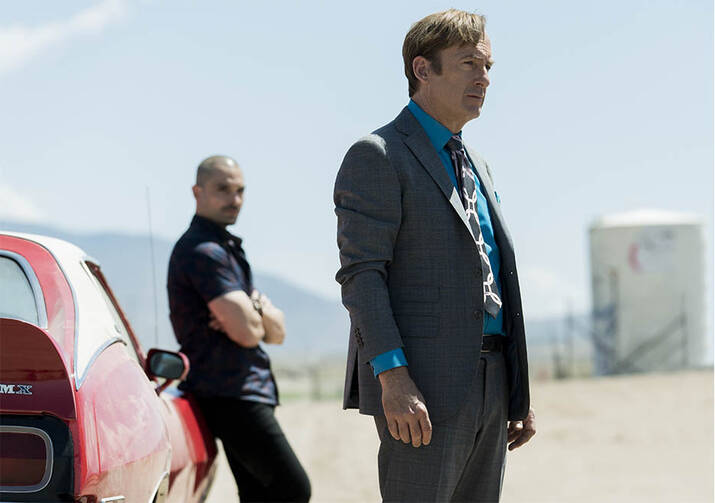 For a few remarkable seasons, AMC’s “Better Call Saul”—a spinoff/prequel to the network’s epochal crime tragedy “Breaking Bad”—seemed not only as good as its predecessor, but in some ways arguably better. It was certainly more companionable and less harrowing than “Breaking Bad.” As it filled in the backstory of Saul Goodman, the comically shady mob lawyer who helped launder the money of meth kingpins, it gave the show’s writers and its star, Bob Odenkirk, free rein to play theme-and-variations on the trope of the con artist and his elaborate scams.

As we watched Jimmy McGill—Goodman’s given name—bilk strangers of money with elaborately improvised shpiels, and later build a law practice on seemingly endless varieties of ambulance-chasing hucksterism, we didn’t exactly cheer him on. But a successful con artist is at heart a storyteller with a strong motivation, and as a dramatic character, Jimmy, played with subtly intense showmanship by Odenkirk, has been irresistible.

For a few remarkable seasons, AMC’s “Better Call Saul” seemed not only as good as its predecessor, but in some ways arguably better.

But there were shadows from the start of “Better Call Saul,” and as the series reached its gripping Season 5 finale last night, it was clear that they have overtaken the show’s formerly capering spirit as it heads for its inevitable appointment with the events of “Breaking Bad” (next season will be its last). To be clear, the show was never a romp; even as Jimmy danced on the high wire with his schemes, the show also unflinchingly explored his toxic rivalry with a persnickety lawyer brother, Chuck (Michael McKean), and detailed the troubling backstory of the laconic factotum Mike Ehrmantraut (Jonathan Banks), as he circled the New Mexico drug gangs we know he will one day serve.

Along the way we met two compelling figures with their own claim on our conflicted sympathies: Ignacio “Nacho” Varga (Michael Mando), a taciturn gang lieutenant struggling to get out of the game even as he is drawn in deeper, and Kim Wexler (Rhea Seehorn), an ambitious but self-destructive lawyer who is both Jimmy/Saul’s intermittent romantic partner and his often unheeded conscience.

This is a simmering brew of rich characters, and this past season brought many of their stories to a gratifying boil. Nacho, caught between rival drug kingdoms, managed some desperate and delicate feats of derring-do to prove his mettle, even as we can feel with tragic inevitability that these will never be enough for him to escape. And Kim, played with bone-deep poise by Seehorn, proved her spine in a series of bold confrontations with clients and colleagues. Her most consequential standoff, though, was with an amoral cartel henchman, Lalo Salamanca (Tony Dalton), whom she talked down from a deadly fight with Jimmy/Saul.

The season’s grim gravitational force has been the moral descent of Jimmy into the orbit of the cartels he will work for in “Breaking Bad.”

Indeed, the season’s grim gravitational force has been the moral descent of Jimmy, newly rechristened Saul (his name is a riff on the tagline, “It’s all good, man”), into the orbit of the cartels he will work for in “Breaking Bad.” Saul kicked off the season with a slick marathon pitch of his legal services to Albuquerque’s least wanted, sweetening the deal with burner phones that autodial his office, and he ended it in a desert shoot-out among rival gangs over a bag stuffed with millions in cash.

For all its taut execution and pungent writing, it must be said that “Better Call Saul” has begun to feel a bit attenuated and repetitive. How many times can Jimmy lie to Kim about the true nature of his business dealings? How many times can we see Kim make the pivot from buttoned-up corporate lawyer to ornery rebel? And among the many pre-“Breaking Bad” questions we may have wanted answers to, how many of us were curious about the engineering feats behind Gus Fring’s immaculate underground meth lab?

It is an unfair comparison, but “Better Call Saul” invites it. The five seasons of “Breaking Bad” are as close as any serialized TV show has come to a seamless whole, unfolding over 62 hours as one long narrative, with nary a moment of filler. I would argue that its near-perfect shape came not only from its well-documented five-act dramatic form but from its firm, even old-fashioned morality (which might be traced to the Catholic upbringing of Vince Gilligan, creator of both series). The universe inhabited by Walter White, mild-mannered chemistry teacher turned sociopathic drug lord, was one in which every action, and every failure to act, had consequences that had to be faced.

To some extent “Better Call Saul” has complicated that moralistic vision with the insights that in this fallen world we are all complicit in evil, big and small; that our best efforts to extricate ourselves from it may only make things worse; and that this realization drives many of us to despair and destruction. If the key moment of “Breaking Bad” was when Walter White admitted that he secretly thrilled to the evil he had committed, the key moment of “Better Call Saul” so far has been when Jimmy/Saul blew his top at a former colleague, ripping off his con artist mask and bellowing, in a tirade that seemed to startle even himself, “I travel in worlds you can’t even imagine! I’m like a god in human clothing!”

If “Better Call Saul” has gotten a bit less fun if no less compelling, it may be because the con game has been exposed, the lies are out in the open, and it’s all over but the shooting.