What if Americans turned to fascism in the 1940s? HBO’s ‘The Plot Against America’ offers an answer. 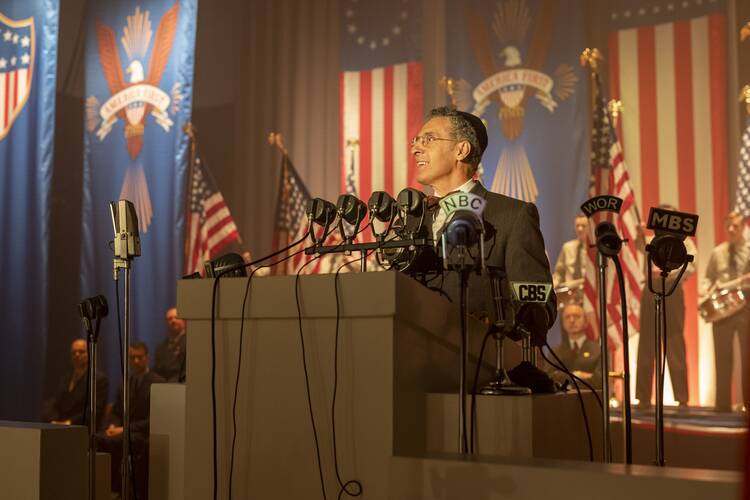 John Turturro plays Rabbi Bengelsdorf in the HBO adaptation of ‘The Plot Against America’ (photo: HBO)

Authors tend to disavow accusations of allegory, as if it would reduce their achievement if we were to read their fictions as mere flipbooks of connect-the-dot analogies. Philip Roth, true to form, brushed off those who read his brilliant 2004 novel The Plot Against America, which imagined 1940s-era Americans turning to fascism rather than fighting it, as a veiled critique of the Bush administration. He had a point: His imaginary President Lindbergh, unlike the real Bush, kept the United States out of an unpopular war far from its shores.

Reality may have caught up to Philip Roth’s imagination.

Reality, though, may have caught up to Roth’s imagination. There are moments in the beautifully made new HBO miniseries adaptation from David Simon (“The Wire,” “The Deuce”) that pop out with vivid Trump-era correlatives: We watch the surprise election of a media celebrity that horrifies one population, while cheering and validating another; then a gradual normalization as the economy booms and many holdouts give up their erstwhile resistance. Apologists and collaborators emerge, grasping opportunities for advancement even as the new administration takes eye-poppingly drastic steps, like relocating vulnerable populations and cozying up to foreign dictators. Openly racist speech and outright violence surge, clearly emboldened by the new regime, which pointedly fails to condemn it.

There are moments in the beautifully made new HBO miniseries that pop out with vivid Trump-era correlatives.

The story is viewed through the lens of one middle-class family in Newark’s Jewish neighborhood, based closely on Roth’s own. The lives of insurance-salesman dad Herman (Morgan Spector), housewife mom Bess (Zoe Kazan), adolescent Sandy (Caleb Malis), and wide-eyed 9-year-old Philip (Azhy Robertson) follow reassuring household rhythms of work and play, until they are disrupted by events that first unfold via their radio, then spill into their very dining room. When Republicans nominate the young, charismatic aviation hero Charles Lindbergh to run against Roosevelt in 1940—at a time when the real-life Lindbergh was the public face of the America First movement, which was explicitly isolationist and more-than-implicitly anti-Semitic—the Jews of Newark react with open disgust and dismay.

That is, all except Bess’s social-climbing sister Evelyn (Winona Ryder) and Rabbi Bengelsdorf (John Turturro), who form a mutually beneficial alliance with the new regime: In return for positions of power and prominence, they effectively inoculate the administration against charges of anti-Semitism. “He’s koshering Lindbergh,” says Alvin (Anthony Boyle), Philip’s prematurely jaded cousin, of a patriotic radio speech by Bengelsdorf. Far from trying to win the Jewish vote, Alvin explains, Bengelsdorf is “giving the goyim all over the country his personal rabbi’s permission to vote for Lindy on Election Day." (Shades of Trump’s “minority outreach,” such as it was.) For his part, Alvin soon escapes to Canada to fight with the British against the Nazis.

Like the novel, the show unfolds with eerie plausibility and almost unbearable suspense.

Like the novel, the show unfolds with eerie plausibility and almost unbearable suspense—just how bad will it get for this alternate-reality America that so resembles the one we know and nostalgize? Rooted in warm-toned mid-20th-century realism, the series is arguably stronger in the domestic register than the world-historical one. Whereas Roth’s novel renders the events of his imagined history in long passages of masterful pseudo-scholarship, the series mostly conjures world developments via newsreel and radio. Still, this is true to one of the novel’s main points: that history unfolds in living rooms as much as on battlefields.

One might quibble with which strands of Roth’s narrative the series chooses to flesh out, but not with its realization. The cast is uniformly excellent: Turturro is a sneaky showboater as the rationalizing rabbi, and Ryder makes a touchingly brittle accomplice. Together they paint a tragicomic dual portrait of self-deluded ambition. As the under-pressure patriarch, Spector captures the way his paternal warmth and fierce integrity are inseparable from his stubbornness and temper; he also happens to perfectly embody Roth’s description of Herman as “handsome in a minor key.” Meanwhile Kazan, a reliable emotional barometer of any scene she’s in, unsurprisingly emerges as the show’s moral center, holding her small brood together against enemies both foreign and domestic.

Yonkers and the ugly politics of 'not in my backyard': A recap of 'Show Me a Hero,' parts 1 and 2
Maurice Timothy Reidy

Jane Austen gets a makeover in ‘Sanditon’
Rob Weinert-Kendt

The moments that may hit hardest, though, as the series progresses—and as our nation and world head into a pandemic crisis that may be as tectonic and generation-defining as World War II—are the ones in which the young actors, Malis and Robertson, look longingly, and with no small amount of helplessness and fear, to their parents for guidance or explanation, as if their minds are racing and their innocent eyes are asking: Is this how the world is going to be from now on?

One powerful and damning subtext of “The Plot Against America” is that the United States has long been home as much to oppression as liberty, the internment of Japanese Americans being just one example from the same period. And while we may not need a book or TV show to remind us that in a sense all of this has happened here, and may happen again, sometimes fiction is the best way to tell the truth. Sometimes imagining a different past, even a dystopian one, can help us imagine a better future.