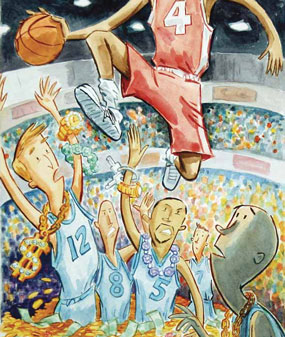 Many people in the United States are beginning to think about and discuss sports in relationship to the spiritual life. Catholic school coaches and administrators have started to gather at regional and national meetings for this purpose. Universities offer courses and have founded centers that deal with the topic. Several books have been written and more are on deck. Even the Holy See has an Office of the Church and Sport. Scholars have gathered for international conferences and have launched a new International Journal of Religion and Sport. Of course, academicians and educators are not the only people interested in sports and the spiritual life.

Many practitioners at the highest levels of sport are recognizing that they cannot find personal satisfaction in earning buckets of money or even in the fame that comes with winning championships. The legendary N.B.A. coach Phil Jackson writes in his book Sacred Hoops: Spiritual Lessons of a Hardwood Warriorthat the narrow-minded pursuit of money and fame distracts players from those aspects of participation that are most important from a human perspective. When first offered a coaching job with the Chicago Bulls, Jackson hesitated to take it because, as he writes, “Over the years I’d grown disenchanted with the way power, money, and self-glorification had tainted the game I love.”

Jackson had learned from his days as a champion player with the New York Knicks that “winning is ephemeral.” He writes about the Knicks winning the N.B.A. championship against the Los Angeles Lakers in the 1971-72 season. Two days after the victory, the team was in New York for a celebration with families and friends, where movie stars like Robert Redford and Dustin Hoffman had also gathered. Jackson felt it should have been the happiest day of his life. “But the intense feeling of connection with my teammates I had experienced in L.A. seemed like a distant memory. Instead of being overwhelmed with joy, I felt empty and confused. Was this it? I kept saying to myself. Is this what was supposed to bring me happiness? Clearly the answer lay somewhere else.”

The Road to Happiness

While the pursuit of extrinsic goods like money and fame can leave a person with a feeling of emptiness, dynamics internal to playing sports can lead to the flourishing of persons. These dynamics are described in the research of Mihály Csíkszentmihályi, a psychologist and author of numerous books, including Flow: The Psychology of Optimal Experience. Csíkszentmihályi agrees with Jackson’s assessment of the relationship of wealth and fame to happiness. For Csíkszentmihályi, while such extrinsic goods are powerful symbols of happiness, it is illusory to think that possession of them will make one happy. Rather, happiness depends on the quality of experience in our lives.

Csíkszentmihályi criticized the discipline of psychology for attending too exclusively to the negative or dysfunctional aspects of human experience. His goal was to understand the phenomenology of human development and well-being in general. In the course of his research, he discovered a “common experiential state” that people described during their participation in sports and other activities. He refers to this as “flow” because the respondents themselves often used the word when asked about their experience. Flow, as he uses that word, “denotes the wholistic sensation present when we act with total involvement. It is the kind of feeling after which one nostalgically says: ‘That was fun,’ or ‘That was enjoyable.’”

Enjoyment is central to the experience of flow. Enjoyment is different from mere pleasure, such as comes with a stiff drink or a sexual experience isolated from a loving relationship. These activities may be pleasurable, but not enjoyable, in Csíkszentmihályi’s sense, because they do not challenge a person to grow or increase the complexity of experience. The flow experience, on the other hand, is characterized by a forward movement, which occurs when people engage in activities like playing a close game of tennis or growing in a loving relationship, both of which call them to move beyond their comfort zone.

One of the first indications that a person is in flow is found in an intense absorption in the activity or experience. Csíkszentmihályi refers to this with the Buddhist term “one-pointedness of mind,” or “merging of action and awareness.” If a person is in flow while shooting a free throw during a basketball game, her mind is completely focused on what she is doing. Her body and mind are united; her action and awareness are one. If a person is playing a musical instrument or a game of Ping Pong, she needs to attend fully to the next note or the next volley. If she begins to wonder whether her performance will make her wealthy or popular, she will be pulled out of the present moment, where she needs to be in order to play well.

Flow is most likely to occur in an activity that has clear demands for action and provides immediate feedback on one’s performance. When a person plays tennis, she knows that she wants to return the ball over the net, and she knows immediately whether she has achieved her goal or not. According to Billie Jean King, her focus while playing is not on the competition, but entirely on the task at hand: “I concentrate only on the ball in relationship to the face of my racket, which is a full-time job anyway, since no two balls ever come over the net the same way.”

Flow experiences typically require a great output of energy and discipline. After prolonged periods of effort and discipline, one experiences an ease or an effortlessness to one’s action and a sense of being carried along by a current. At these times, “action follows upon action” seemingly without the need for conscious intervention on our part.

During flow experiences, because of the enjoyment and the intense absorption in the activity, the person forgets about himself temporarily, or experiences an “egolessness.” This does not mean that the self disappears, but that explicit reflection on the self stops for the time being. The game requires all of the person’s attention. Consequently, he does not have the psychic energy required to wonder, How am I doing? or What do they think of me? It is enjoyable to forget about oneself in this way temporarily. Yet when the activity is over and the person reflects on himself anew, the self he is reflecting on has changed and grown.

Flow experiences are not individualistic. On the contrary, what is deeply satisfying is letting go of ego concerns and experiencing oneself as a part of something larger. Participation in team sports leads readily to such experiences, because all the team members need to play together in order to be successful. Even the most gifted players must learn how to be a part of something larger than themselves. Phil Jackson notes that even though Michael Jordan put on virtuoso performances repeatedly in his early years with the Chicago Bulls, the team could not win consistently. When other teams noticed that Jordan’s teammates were not involved in the offense, they would simply focus on stopping him. Only when Jordan was willing to step back so that his teammates could grow as players and everyone could be involved in the offense was the team able to win its championships.

One of the most characteristic features of flow activities is that they are or become autotelic activities. The word autotelic is derived from the Greek words auto, self, and telos, goal, and suggests that the goal is within the activity itself. In terms of sports, the games would be played for their own sake. This emphasis differs from what is usually set forth as a rationale for the value of sports for young people: that participation in sports will build character or help prepare them for life or for competition in the business world. Some parents and young people also view sports as a way of gaining upward mobility. Usually the emphasis is on some goal outside the activity of sport; little attention, however, is given to the enjoyment of the activity itself.

On several points Christian spirituality correlates with and complements the insights of Csíkszentmihályi and practitioners like Phil Jackson. The first is the recognition that we get off track in a spiritual sense when we become too attached to money and status. Jesus repeatedly reminds his listeners of this point, insisting that “no one can serve both God and mammon.” St. Ignatius Loyola points to the same dynamic in the “Two Standards” meditation of the Spiritual Exercises, writing that the tactic of the enemy of our humanity is to ensnare people in the desire for riches, honor and pride.

In another place, Thomas comments on a text from Ecclesiastes: “Run home to your house and there withdraw yourself, play and do what you have a mind to” (Eccl 32:15-16). In contemplation, he writes, “it is...necessary that we ourselves should be fully present there, concentrating in such a way that our aim is not diverted to other matters.”

Accordingly the text goes on, “And gather yourself there,” that is, draw together your whole intention. When our interior house is entirely emptied like this and we are fully present there in our intention, the text tells us what we should do: “And play there.”

If, in the view of St. Ignatius, we get off track when we are ensnared by riches, honor and pride, then experiences of consolation (his word for the felt experience of being led and guided by the Spirit of God) are an indication we are moving in the right direction. And Ignatius describes such experiences in terms similar to flow: Consolation is an experience of “genuine happiness and spiritual joy,” for example. Consolation is associated with effortlessness; the experience is gentle and easy, like water falling into a sponge or like coming into one’s own house through an open door. It feels as if obstacles are being removed so the person can move forward in doing good. This effortlessness usually comes after much disciplined attention and practice. Finally, consolation is related to the growth and development of the person, helping one move from good to better.

Of course, consolation has a broader reach than flow. The genuine happiness and spiritual joy associated with consolation can be experienced in the forgiveness of sins or during times of profound suffering. But this does not make the experiences of flow in sports and in other activities unimportant for the spiritual life. Such experiences are enjoyable and rewarding in themselves; they too are “signals of transcendence.” They point out to us what we are made for and help us to understand how, as Thomas said, “Grace perfects nature.”

From the archives, the editors on violence in boxing and pigskin mania.

This article also appeared in print, under the headline “Experiencing Life's Flow,” in the October 20, 2008, issue.

Patrick Kelly, S.J., is assistant professor with a dual appointment in the department of theology and religious studies and at the Center for the Study of Sport and Exercise at Seattle University.