R.I.P. John Prine, oracle of the broken and the beautiful 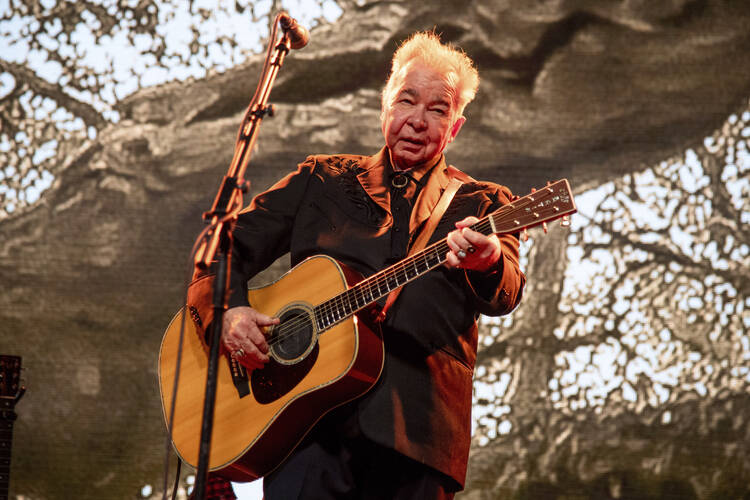 John Prine performing at the Bonnaroo Music and Arts Festival in Manchester, Tenn, on June 15, 2019. Prine died Tuesday, April 7, 2020, from complications of the coronavirus. He was 73. (Photo by Amy Harris/Invision/AP)

Like many another country-folk singer, John Prine sang a great deal about death in his 50-year musical career. But Prine, who died Tuesday at 73 in Nashville of complications from Covid-19 after a series of serious illnesses, was set apart in a striking way: His songs about death were rarely maudlin or syrupy, and never sentimental. Sometimes they were absurdly funny, as seen in some of the lyrics from “Please Don’t Bury Me.”

Please don’t bury me
Down in that cold, cold ground
No, I’d rather have ’em cut me up
And pass me all around.

Throw my brain in a hurricane
And the blind can have my eyes
And the deaf can take both of my ears
If they don’t mind the size.

Give my stomach to Milwaukee
If they run out of beer
Put my socks in a cedar box
Just to get ’em out of here.

Venus de Milo can have my arms
Look out! I’ve got your nose
Sell my heart to the junk man
And give my love to Rose.

The song has the same jaunty rhythm and lightheartedness as classic Prine songs like “In Spite of Ourselves,” “We Could” and “I Know One.” (More than one of those songs were played at the weddings of my siblings; on one occasion, several of us distracted our father in conversation, lest he listen too closely to the lyrics.) However, what is most remarkable about Prine’s somewhat breezy attitude toward death is that his truly great songs—and there are many truly great songs—exhibit a deep melancholy and unswerving attention to the messy and painful details of life; upon hearing the news of his death, a friend called him “the oracle of the broken and the beautiful.”

John Prine’s truly great songs exhibit a deep melancholy and unswerving attention to the messy and painful details of life.

Prine could capture the wistfulness and longing behind any human situation: My favorite songs of his deal with a young couple falling out of love (“Far From Me,” actually written about his first girlfriend); an old couple who feel listless and alone now their children are gone (“Hello in There”); and a veteran “of the conflict overseas” who falls prey to addiction (“Sam Stone”). That last one has another of Prine’s heartbreaking lyrics, written from the perspective of one of Sam Stone’s children: “There’s a hole in Daddy’s arm where all the money goes/ Jesus Christ died for nothing, I suppose.”

That ability to capture the particular details of human wistfulness and longing is perhaps no better illustrated than in Prine’s most famous (and endlessly covered) creation, “Angel From Montgomery,” a song about nothing more than a woman cleaning the house while her husband is away at work. But in the midst of her chores, she gives forth a heart-rendering confession: “If dreams were lightning, and thunder were desire/ This old house would have burnt down a long time ago.”

“If dreams were lightning, and thunder were desire/ This old house would have burnt down a long time ago.”

A close second for lyrical brilliance in my book is the moment in “Far from Me” when the narrator realizes his beloved has moved on in head and heart, if not yet physically:

We used to laugh together
and we danced to any old song;
well you know, she still laughs with me
but she waits just a second too long.

John Prine was born Oct. 10, 1946, in Maywood, Ill, outside Chicago. He was discovered almost simultaneously by the film critic Roger Ebert, who stumbled across Prine singing in a Chicago bar in 1970 and was astounded to discover the lyrical genius was a 24-year-old mailman (and wrote the first review of Prine’s music, “Singing Mailman Who Delivers a Powerful Message in a Few Words”), and the singer-songwriter Kris Kristofferson, who heard him sing in another Chicago bar and invited him to come onstage when both were in Greenwich Village a few weeks later.

“Well, I sat there at the table and I acted real naive/ For I knew that topless lady had something up her sleeve."

Prine was signed to a contract almost immediately. Every music executive was looking for the next Bob Dylan (their name is Legion, for they are many), and Prine seemed like the only songwriter who could hold a candle to Dylan in terms of lyrical mastery of the American country-folk idiom. Indeed, it is almost impossible to listen to Prine’s “Spanish Pipedream” and not think Dylan wrote it; it is without question Prine’s “Tangled Up in Blue.” (Want to hear a songwriter’s “Look Ma, no hands!” moment? Listen to “Spanish Pipedream” for this brilliant stanza: “Well, I sat there at the table and I acted real naive/ For I knew that topless lady had something up her sleeve.”)

What four new books on Bob Dylan can teach us
James T. Keane

Over the years, Prine collaborated with numerous singers, including Bonnie Raitt (who made “Angel from Montgomery” famous), Steve Goodman, Emmylou Harris and, most famously, Iris DeMent. He seemed to recognize that, like Dylan, his talents were in conjuring up the tale and setting it to the tune, not necessarily croaking out the song—a task made all the more difficult after he had surgery to remove a cancerous tumor from his throat in 1998. In concert he would often preface songs with a brief description or a funny anecdote, and it was always striking to hear just how raspy and dry his voice could sound in person. In 2017 Prine published a collection of his lyrics along with commentary and photographs, John Prine Beyond Words.

Over the years, Prine collaborated with numerous singers, including Bonnie Raitt, Steve Goodman, Emmylou Harris and, most famously, Iris DeMent.

Prine is survived by his Irish-born wife, Fiona Whelan Prine; two brothers, Dave and Billy; three sons, Jody, Jack and Tommy; and three grandchildren. Reactions to his death on social media from his millions of fans ranged from shock to dismay to even one wry comment, “Of course John Prine would choose the pandemic to die in.”

Rest in peace, John, and thank you, not for your ears or your arms or your stomach, but for all the times you gave us something that we could hold on to, because sometimes “to believe in this living is just a hard way to go.”

@jamestkeane
Provide feedback on this article
Join the conversation: Login or create an account
Before you can comment, you need to update your profile to include your first and last name, as required in our comments policy. Then reload this page and you'll be set up for commenting. Update your profile
Show Comments ()
Comments are automatically closed two weeks after an article's initial publication. See our comments policy for more.