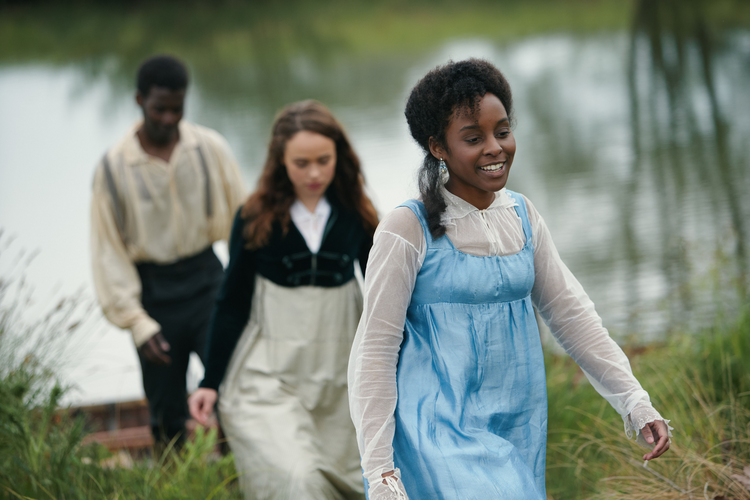 Pandering fan service isn’t just for “Star Wars” or the Marvel universe. What was last year’s “Downton Abbey” film if not a giant Fabergé Easter egg for PBS-watching Anglophiles? The audience that craves the sight of ornate house furnishings and the sound of snappy bon mots delivered by dowagers or fops, and which prefers its romance smoldering and sublimated, is no less particular in its tastes than the most exacting sci-fi fanboy.

But can you have fan service for a popular author’s brand, rather than a comic-book franchise? The author in question is Jane Austen, and the case in point is “Sanditon,” an eight-part TV series very freely inspired by her unfinished final novel, now showing on PBS’s “Masterpiece” series through Feb. 23. The reaction from Janeites when the show aired last fall in the United Kingdom was less than warm, in part because the series creator, Andrew Davies, played fast and loose with Austen’s admittedly sketchy plot. He also made explicit much of what is implicit in English novels of the period, including matters of sex, race and class, and introduced lurid plot elements straight out of Gothic novels: a dramatic deathbed confession, a tragic fire, a sexed-up love triangle among scheming would-be heirs.

Series creator Andrew Davies has made explicit much of what is implicit in English novels of the period, including matters of sex and race.

Even if the show’s ostensible intended fans haven’t embraced it, though, “Sanditon” is best seen—and enjoyed, to an extent—as a kind of greatest hits compilation of 19th-century period tropes, artfully tailored for folks who like that sort of thing. Some of the show’s gambits are true to classic Austen, like the female camaraderie that forms between Charlotte Heywood (Rose Williams), a bright young farm girl, and Georgiana Lambe (Crystal Clarke), an heiress from the West Indies, or the textbook hate-warming-to-love relationship Charlotte forms with Sidney Parker (Theo James), a rich playboy chastened into responsibility when his brother plunges disastrously into debt.

Charlotte, on hand for an indefinite visit to the beach town of the show’s title, quickly insinuates herself into Sanditon’s bustling affairs with a combination of can-do pluck and curiosity. Praised often, and only occasionally scolded, for speaking her mind and offering well-meaning advice to all comers, Charlotte is a kind of too-good-to-be-true period-film pixie, less evocative of Austen’s Elizabeth Bennet or Emma Woodhouse than of a Disney heroine. Williams is never less than watchable in the role, though, and her romantic chemistry with James’ Sidney is so overpoweringly obvious it’s almost funny.

“Sanditon” is best seen as a kind of greatest hits compilation of 19th-century period tropes.

A subplot involving the town’s rich patron, Lady Denham (Anne Reid), and her contested inheritance feels less like Austen than Thackeray. As the old widow plots openly, even crassly to marry off her nieces, Clara (Lily Sacofsky) and Esther (Charlotte Spencer), the two women scheme diabolically to one-up each other, with a louche boy toy, Edward (Jack Fox), traded between them. It’s all a bit tawdry and guilty-pleasurable, but Spencer’s Esther unexpectedly emerges as the series’ spiny, if faintly spidery, second heroine.

Along the way there is a cricket match and a regatta, a few assorted balls, a medical demonstration by a comic-opera German doctor and much clattering of horse-drawn carriages and strolls on the beach. Less fully developed, even half-hearted, are a few plot strands that bring class and race to the forefront in a way that feels more like Thomas Hardy or one of the Brontës than Austen. There is a young contractor, Stringer (Leo Suter), with aspirations to architecture and some stirrings toward labor activism. And Georgiana’s would-be fiancé, Otis Molyneaux (Jyuddah Jaymes), is a formerly enslaved black man, manifestly unwelcome in the lily-white town, though his relationship with his intended ultimately founders for more prosaic reasons than racism.

Davies, an old hand with a stellar track record of adapting Austen and Dickens, clearly knows what he’s doing, even as he indulges in some eye-roll-worthy excesses.

Davies, an old hand with a stellar track record of adapting Austen and Dickens, as well as creating the delicious original “House of Cards” series, clearly knows what he’s doing, even as he indulges in some eye-roll-worthy excesses. At one point a young suitor gallantly assures Esther that he will not injure her “self-worth,” an unlikely formulation for the period. And when two malefactors conduct an illicit assignation on a tiled floor decorated with a giant snake, we may think we have suddenly switched the channel to “Rome.”

But there is no denying the special pleasure of putting ourselves in the hands of a storyteller so steeped in his material that he feels free to riff and extrapolate, mixing clichés into a hearty stew along with fresh spices and flavors. If we’re going to be pandered to, we might as well have it done this well.

I am not sure whether to see the series’ unexpectedly tearful and unresolved ending as bold, subversive truth-telling about the economic pressures of the patriarchy or as a cynical ploy to set up a second season. But I like “Sanditon” well enough—and know myself well enough—to concede that I would gladly binge another season of vaguely Austen-related trifles.

This article also appeared in print, under the headline “Jane Austen gets a makeover,” in the March 2, 2020, issue.