Yonkers and the ugly politics of 'not in my backyard': A recap of 'Show Me a Hero,' parts 1 and 2

Yonkers and the ugly politics of 'not in my backyard': A recap of 'Show Me a Hero,' parts 1 and 2 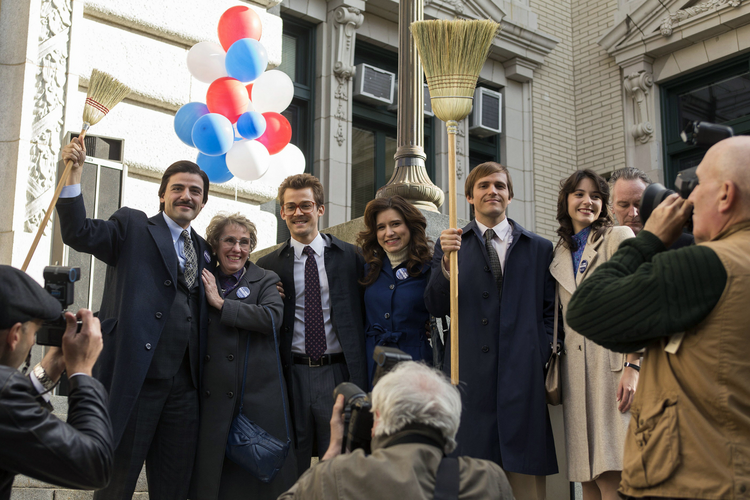 BEFORE THE STORM. Oscar Isaac, left, as aspiring Mayor Nick Wasicsko in "Show Me a Hero" (HBO)

Surprising fact: Yonkers is the fourth largest city in New York state, ahead of Syracuse and Albany. Home to 195,000 people and covering 18 square miles, the city exists (almost literally) in the shadow of the great metropolis immediately to its south. I grew up in the Riverdale section of the Bronx, and as a teenager Yonkers was wearingly familiar to me. It was not an especially pretty place to visit, but it’s movie theaters and shopping malls were easier to reach than midtown or Times Square. Plus, many of my friends lived there.

Then and now, Yonkers is a mystery for many New Yorkers, a place they pass through on the train on their way to more scenic parts of the Hudson Valley. The new HBO miniseries, "Show Me a Hero,” about the fraught politics of 1980s housing policies in Yonkers, may not change any of that, but it could lend the city the sort of pop culture attraction that Baltimore now enjoys thanks to “The Wire.” “Show Me a Hero” is also written by that show’s creator, David Simon, and is directed by Oscar winner Paul Haggis. Based on a non-fiction book by Lisa Belkin, it began airing on HBO last night and continues for the next two Sundays. I’ll be posting post-show commentary for the next two weeks.

It is obvious, from the moment the film begins, that Yonkers is a middle class town. The politicians wear ill-fitting suits and live in pretty but slightly run-down homes. City councilman Nick Wasicsko, played by Oscar Isaac, lives with his mother, but he has higher aspirations, including a new secretary in the mayor’s office and, possibly, the mayor’s office itself. He is invited to run for mayor by a colleague, and it is a sign of his narcissism that he agrees, even thought he knows he has little shot at hizzoner’s chair.

Surprising everyone, including himself, Wasicsko wins, propelled by an anti-incumbent campaign that targeted the mayor for his willingness to go along with a federal court order that mandated the building of affordable housing in mostly white neighborhoods. The council is also divided on the order, which pits middle class home owners against the NAACP and others fighting for minorities who live in deteriorating housing projects west of the parkway that divides the city.

Simon and his co-creators are interested in less in the rightness of the housing policy (though it is obvious they are sympathetic to its goals) than in its effect on the people of Yonkers. The campaign against the housing plan is vicious, with residents showing up at city hall meeting with guns and throwing pampers at the “baby” (28-year-old) mayor. The homeowners are pretty much all white, many of them Catholic, and some of them are suspicious of the Jewish judge who handed down the order. It’s not a pretty picture.

When Cardinal John O’Connor agrees to build low-income housing on a slice of his seminary’s property in Yonkers, local parishioners are incensed and refuse to donate to the annual cardinal’s appear. The series suggests that the cardinal later went back on his promise because of pressure from his flock. Based on this New York Times report from Peter Steinfels in 1988, I suspect the story is more complicated—we’ll see how the storyline plays out.

It is to Simon and his collaborators' credit that, as ugly as the “not in my backyard” rhetoric becomes, the residents of Yonkers are not wholly demonized. These are, after all, working class families who are living in probably the first house they ever owned. Not too long ago, they lived in the inner city themselves, and they don’t want to go back there. Nor can they afford to move into wealthier neighborhoods or send their children to expensive private schools. This is another sad story of class division, made all the more tragic by the fact that the classes at war are not that far apart.

At the heart of the class combat is fear, a fear that is made worse by the fact the black, brown and white residents of Yonkers know very little about one another. This is, perhaps, is the strongest argument in favor of integration, in Yonkers and elsewhere. If we do not live next to people of different races or classes, or send our children to the same schools, it is far easier to demonize them as the “other.” But “Show Me a Hero” also shows how painful forced integration can be, and seems to raise questions about whether blunt government action is the best tool to achieve the desired end. It reminds us that in 1980s public housing was largely a failure, so the notion that it could work in Yonkers was sometimes rightfully seen as quixotic.

The fate of Yonkers' mayor and a federal housing plan: 'Show Me a Hero,' parts 3 and 4
Maurice Timothy Reidy

Episode 2 ends with a few city councilman facing jail time as they dig in against a final court order mandating the building of affordable housing. The mayor is in favor of the plan, if only to avoid plunging the city into bankruptcy, and he begins to articulate his reasoning to a skeptical constituent on the phone: “A leader is supposed to lead and that’s what I’m trying to do.”

Leadership sometimes also means taking people in a direction they don’t want to go. Whether the mayor can succeed in the face of stiff opposition and a tight two-year election cycle is very much an open question.

I do not share your pessimism about any form of public housing. It is a polarizing issue, as you demonstrate, but I agree it should be discussed without resorting to language that polarizes and paralyzes—which, sadly, is what you are doing here.

Bill Mazzella
4 years 7 months ago
Frank, the townhouses are working fine in Yonkers, the place this series is about. Why do you ignore that and project to other places? No question that government has to provide better for the middle class and let upscale neighborhoods like that of Judge Sands, bear more of the burden.
Advertisement
More: Development / Race / Civil Rights / Housing