A Good End for ‘The Good Place’: A meditation on the series finale 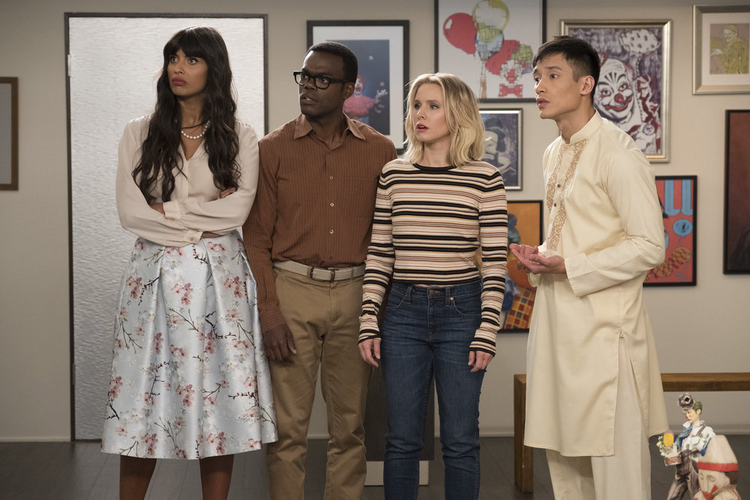 I had this whole piece ready to go about the finale of “The Good Place.” It wasn’t really about the show as much as it was about how we have no idea what happens when we die, that many of the things the church has taught about it seem either clearly wrong and terrible (an eternity of punishment) or just plain silly (harps, sofa clouds, no pets allowed).

For me, if the life after doesn’t continue to involve some sort of ongoing journey of letting go and learning and becoming more generous and free, I just don’t know what the point of it is anyway. Anyone excited to see a white light and spend all of eternity with all their relatives has forgotten Thanksgiving and never stood under a fluorescent lamp.

Watching the finale, my mind wandered through places in my life that have been special to me.

If I’m being honest, most of this I have already written elsewhere, probably even in the article I wrote about “The Good Place” when it first aired. For someone who thinks it’s pretty dumb to say you have an idea of what’s going to happen when you die, I sure like to do it a lot.

But watching the finale of “The Good Place,” in which each of our friends finally gets to the end of their everything and takes one last step into the great unknown, I didn’t think about heaven or hell.

I thought about the snow globe music box that my godson gave me one Christmas. It was the kind of thing you grab at a Hallmark store for your grandma and/or uncle who is a priest when you’re young and trying to be thoughtful and wondering, “What the heck do you buy for them anyway?” It was totally unexpected, and it has always meant a lot to me.

For someone who thinks it’s pretty dumb to say you have an idea of what’s going to happen when you die, I sure like to do it a lot.

And there’s this leather rucksack I bought for my youngest nephew, which may or may not ever mean much to him. But after I bought it I had this incredible feeling of gratitude, like I was lucky just to be able to give it to him.

And I thought about how most restaurants that are not chains actually have pretty fantastic specialty cocktails, and that it’s ridiculous that it has taken me 50 years of life on this planet to discover that. Also, if stumbling across the triumph that is a jalapeño margarita can bring me this much joy, how much more happiness would I find if I tried some of the things I have always wanted to do?

Watching the finale, my mind wandered through places in my life that have been special to me, and people, too—mentors and heroes, family and friends who have died. At times I sense them still in my life—a quiet presence at Mass, the hilarious smarter-than-everybody teenager who sounds a lot like my sister and keeps popping up in my scripts.

Here at the very end of the story, I am realizing this was never a show about what comes after your life at all.

I thought about relationships that have fallen apart, too, how hard it can be to let go and yet, God, what a relief it sometimes is when you finally do. And how I probably haven’t allowed myself near enough space of heartbreak or vulnerability. If I don’t start opening myself up pretty soon, I may never get the chance. Mindy St. Claire, save a place for me.

I thought about how amazing it would be to get to a point where each member of my family had worked through our issues enough that we could someday have meals together without having to be afraid of triggering anyone else. That we might even look back on the past’s difficult moments without fear or resentment.

And I heard the show say again and again in its finale that these desires for release and reunion are not idle hopes, that when it comes to any of the stuff that hurts or feels unfinished, it’s really just a matter of enough Bearimys. “There was no bad stuff,” Janet tells Jason at the end. “It was all good.”

From the perspective of eternity, everything will happen and everything will be healed, eventually. And how much better would our lives be if we allowed ourselves and one another that kind of patience?

I have spent four years using “The Good Place” as a jumping-off point to debate what happens when we die. But here at the very end of the story, I am realizing this was never a show about what comes after your life at all (dummy) but rather what you do with the life you have: who you share it with, what risks you take, what you let yourself receive.

As much as it is nice to imagine a future of mansions or road trips in the sky, dinners with Einstein and an endless supply of spicy chicken wings, there is also something wonderful to be said for the idea of death as an act of generosity, a final gift of ourselves to the universe to be used where it or God or a girl from Phoenix with a penchant for cheap margarita mix may need.

The wave returns to the ocean, where it came from and where it’s supposed to be.