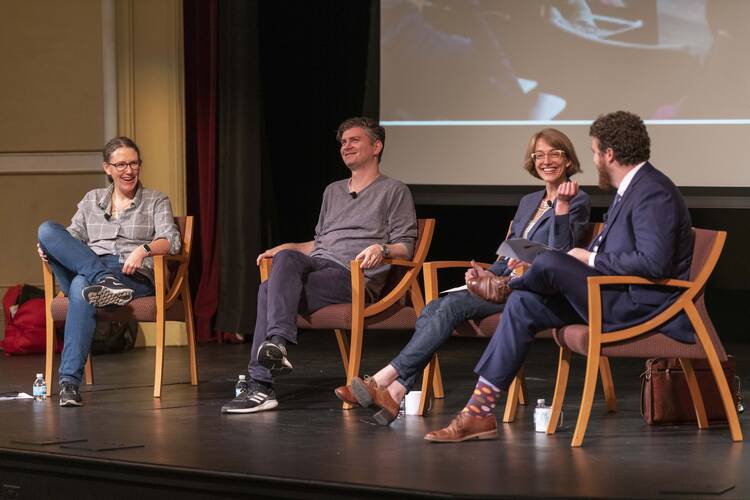 What does it mean to be a good person? Can television actually make us better people? And why does everyone hate moral philosophers?

These are just a few of the questions students wrestle with in “The Good Class,” a unique hybrid course of philosophy and film studies at the University of Notre Dame.

Inspired by the NBC sitcom “The Good Place”—a supernatural comedy about average people trying to improve themselves in the afterlife—this interdisciplinary course combines moral philosophy and media studies to ponder the relationship between mass-appeal art and morality, the show’s engagement with multiple ethical theories and humanity’s capacity for goodness.

At the helm of “The Good Class” are three faculty members (or “Architects” as they call themselves) from different departments in the College of Arts and Letters. There is Meghan Sullivan, a professor of philosophy and director for Notre Dame’s God and the Good Life program; Christine Becker, an associate professor in the Department of Film, Television and Theatre; and Ricky Herbst, the cinema program director of the Browning Cinema. According to Sullivan, the idea for the course developed after she and Maria Di Pasquale, the academic advancement director for Arts and Letters, secured showrunner Michael Schur for a fall lecture on Notre Dame’s campus. Besides his critical darling “The Good Place,” Schur is well known for co-creating “The Office,” “Parks and Recreation” and “Brooklyn Nine-Nine.”

After the university confirmed an official date for Schur’s visit, Sullivan, Becker and Herbst convened in January to deliberate ways that they could maximize the potential of a day spent with Schur. Their discussion turned to their mutual obsession with “The Good Place,” which both intrigued and invigorated the three academics with its scholastic potential and creative attempts to “reach for something more,” as Becker described to America. Eventually, their conversation evolved from entertaining the possibility of teaching a class on “The Good Place” to seriously considering it.

“[We started] brainstorming increasingly outlandish ideas and feeding off of each other pushing the envelope a little further,” Sullivan said. “At some point, it just pulled over the edge and became a real class.”

Their dedication and intellectual devotion to “The Good Place” is clear throughout “The Good Class.” The course syllabus is peppered with references and jokes about the show (including a warning that students with unexcused absences will receive “an Unsatisfactory grade and a devastating declaration that Ya basic”).

Both students and professors draw on their diverse majors and degrees to collectively gain new knowledge, consequently mimicking motifs in “The Good Place” of improvement through social collaboration. “We had to boil it down to the most essential things in television studies, in philosophy, that would allow our class to have a basic understanding that we could build upon in our conversations amongst each other and then with Mike Schur,” said Becker.

Those essential lessons culminated on Sept. 16 when Schur arrived at Notre Dame and attended an extended session of “The Good Class,” where he talked with students about the show’s representation of nihilism and moral truths.

Later in the evening, he sat on a panel with Sullivan and Becker in the university’s Washington Hall for a more general conversation on television production and moral philosophy. Approximately 400 people attended the ticketed presentation, which was moderated by the associate dean of the arts, Peter Holland.

“If television can’t make us better people, then nothing can,” Schur said.

The dean of the College of Arts and Letters, Sarah Mustillo, introduced the panel. In her opening remarks, she stated that Schur’s ability to make “comedy out of life’s provocations” and encourage “viewers to think through these ideas in their own lives” made him an ideal guest.

The panel discussion ranged from Schur’s various experiences in the TV industry to how “The Good Place” was developed for NBC and whether media can improve its audience’s moral compass.

“If television can’t make us better people, then nothing can,” Schur said, arguing that TV could serve as a vehicle for moral truth if used responsibly. “Any art form that millions of people are engaging with has the ability to do something.”

Schur and the other panelists also acknowledged that the media’s primary motivator is economic, which can limit its capacity for creating authentically virtuous content.

Sullivan claimed that simply recognizing moral lessons in television does not make viewers inherently better people. Rather, she called for collaborative ethical discernment among watchers, arguing that we should first talk about our moral observations with one another, then actively apply those truths in our own lives.

During the Q&A session, Schur said that his inspiration for “The Good Place” stemmed from his interest in philosophy and its inadvertently comical thought experiments. “There are aspects of moral philosophy that are inherently funny,” he said, before illustrating his point with the Trolly Problem, which raises more questions than it answers. “You’re telling me that I’m operating a trolley and I have to choose between running over one person or five people? There’s no third option? That’s hilarious!”

Overall, the panelists and event planners felt that the panel discussion was successful and a positive experience for Notre Dame’s community. “[Schur] was tremendously generous with his time and insight, inspired a lot of people and started a conversation about ethics and media that is going to percolate for a long time to come on campus,” Sullivan said to America via email after the event.

And of course, the experience will percolate in “The Good Class’s” final sessions.

I so wish there was a video record of these classes! I would love to attend (in person or virtually). Use film to extend the reach!! I love when concepts like discernment and lifelong conscience formation are raised. These concepts are central to Catholicism, and, in my way of thinking, living a moral life.