Purgatory is other people on ‘The Good Place’ and ‘Forever’ 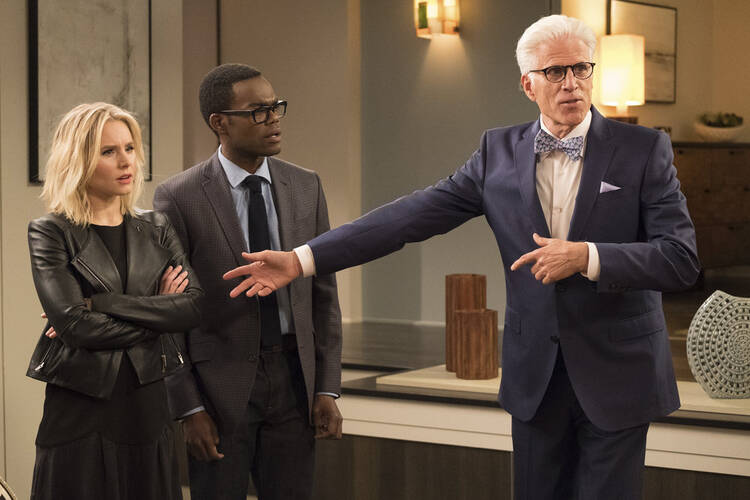 The new year is a time to pledge yourself to self-improvement: Eat better, exercise more, spend less time on Twitter. Of course, it is hard to stick to these virtuous programs. You are trying to change while most of your life stays the same. You have the same work schedule. The same home. The same kids. The same spouse. The same propensity to take long naps. Self-improvement is too hard, and too much bother. It is no wonder you return to your old ways and find yourself vowing once again, at the end of the year, to do better.

What if you could improve yourself after you are dead? This appealing prospect drives two current TV comedies.

This appealing prospect drives two current TV comedies, both set in the afterlife: NBC’s “The Good Place” and Amazon’s “Forever.” Both shows exploit the gap between the universal desire to be better and the equally universal desire not to be better now. It is Augustine’s “grant me chastity, but not yet,” the best joke in all of Christian theology, pushed to the extreme. In exploring the ethical challenges of the afterlife, the two series tell us a lot about how and why we strive to be better in our earthly lives.

“The Good Place,” now in its third season, follows four people who died in their 20s and 30s: cynical Eleanor (Kristen Bell), indecisive Chidi (William Jackson Harper), vain Tahani (Jameela Jamil) and dim-witted Jason (Manny Jacinto). They get to a not-very-sweet hereafter and soon discover that it is actually a version of hell, in which they have been set up to torture each other psychologically forever. Once they realize the truth, they become committed to moral improvement, believing that they can get into “the good place” if they earn more merit points (literally) by performing good actions.

But they encounter many barriers to entry. At first, the chief obstacle is Michael (Ted Danson), the avuncular demon who set up their torment but whose sympathy for the humans grows as he sees their repeated efforts at moral development. Later, the infernal bureaucracy gets in their way. In the current season of the show, the characters have returned to earth. Michael reboots their timelines and helps them escape death so they can turn around their lives, and the lives of others.

“The Good Place,” now in its third season, follows four people who died in their 20s and 30s.

Belief in postmortem moral progress is a staple of several religious and philosophical systems. Dante saw Purgatory as a “second kingdom…where the soul of man is cleansed, made worthy to ascend to Heaven.” The kingdom has a regimen: Carry this boulder, walk through that firewall, contemplate a sequence of moral exemplars. In Hindu and Buddhist doctrines of reincarnation, creatures are reborn into positions determined by their previous actions, and each successive life is an opportunity for better karma.

Immanuel Kant—whose books Chidi, a philosophy professor, reads constantly—argued that we could justifiably believe in an afterlife, based on comparing the shortness of human life with the great need for continuous moral improvement. For Kant, ought implies can; if we should fulfill the moral law, then it must be possible to do so. But the moral law is so rigid, and human beings learn so slowly, that we would need an eternity to attain perfection. So, Kant argued, we can safely assume we do have that much time.

Michael informs Eleanor in an orientation meeting that each of the world’s religions got the afterlife about 5 percent right. It is a blessing that people on earth don’t know more. After the characters’ lives are rebooted on earth, they find out about that point system for getting into the good place. Once they do, Michael tells them they can never get there. Their knowledge taints the purity of their motive; they couldn’t be good for its own sake.

One episode suggests—through a brilliant guest appearance by Michael McKean—that knowing how the afterlife works is a curse. If you know what you have to do to secure eternal bliss, you become scrupulous and obsessive about maximizing your points. Being perfectly moral and living a good life, therefore, seem to be two different things.

In ‘Forever’ heaven as religious skeptics envision it: clean and boring.

If “The Good Place” explores the challenge of individual betterment, “Forever” is about improving our intimate relationships. In “Forever,” June (Maya Rudolph) and Oscar (Fred Armisen) are a childless married couple who die, in separate incidents, when they attempt to break out of their deeply ingrained middle-class routines. The scene of their afterlife is a generic California suburb, albeit one filled with exquisite midcentury ranch houses. June and Oscar play out a daily script of long walks, pottery, crosswords and shuffleboard with the neighbors. It is heaven as religious skeptics envision it: clean and boring.

An opportunity to escape this humdrum eternity drives the main narrative arc in “Forever.” In this afterlife, the desire to break from one’s past self, and past attachments, ends up looking shallow. Self-improvement is not a matter of adventure but of deepening the relationships you already have. “Sometimes I blamed you for being in the way of me becoming this hypothetical, amazing new version of myself,” June admits to Oscar. “But I was never gonna become that person.” Paradoxically, it is through accepting who you are—and who you are not—that you can venture into the unexplored moral territory right under your feet.

This deep insight doesn’t quite redeem a mediocre show, however. “Forever” unfolds over four languid hours and ends on a note that mostly gestures toward a second season. And it is surprisingly unfunny, given its cast. Armisen and Rudolph were frequent partners in “Saturday Night Live” musical sketches. In “Forever,” their characters are written to be too restrained for the actors to put their gifts to use. (Rudolph draws more laughs in a small role in “The Good Place” as a cosmic appeals-court judge.)

Is your job necessary?
Jonathan Malesic

We want to believe we can improve morally after death, and our religions and philosophies suggest it is possible. But if that is true, then what is the incentive to improve ourselves and our relationships now? Doesn’t the possibility of delay just encourage moral laxity?

Apparently not. This is what is most remarkable both in “The Good Place” and in our lives. Eleanor and the others try and fail to be better over and over. They even keep trying after they learn that good works after death don’t count. Michael offers a sort of grace when he nudges the characters toward the right path, but that just amounts to bringing them closer together. Their bond is what helps them get better. It seems to be all the motivation they really need.

No, moral improvement is not easy. It is easy to give up. But still, as Eleanor says about a plan to help others advance morally, “Why not try? It’s better than not trying.”

"The Good Place" sounds delightfully insightful. Yes, we have to do our part to become holy. But what is "our part"? Two stories, the first perhaps apocryphal, the second factual. The first: St. Teresa of Avila says that Christ appears to her saying: "Teresa, I want you to give me something." "But Lord, I've given you everything. What more can I give you?" "Teresa", the Lord replies, "give me your faults." As an oyster transforms an irritant into a pearl, the Lord transform our sins into grace. But there's the rub-- our part is to let Him do the transforming.
The second story is from Pope John Xxiii 's diary. On 3/26/45, at the age of 64, he writes: "I do not weep, and I do not even desire to live my life over again, so as to do better. I entrust to the Lord's mercy whatever I have done, badly or less than well..." In other words, our part is to entrust ourselves to the Lord's mercy. A good place to be.