What ‘Jojo Rabbit’ could learn from Mel Brooks 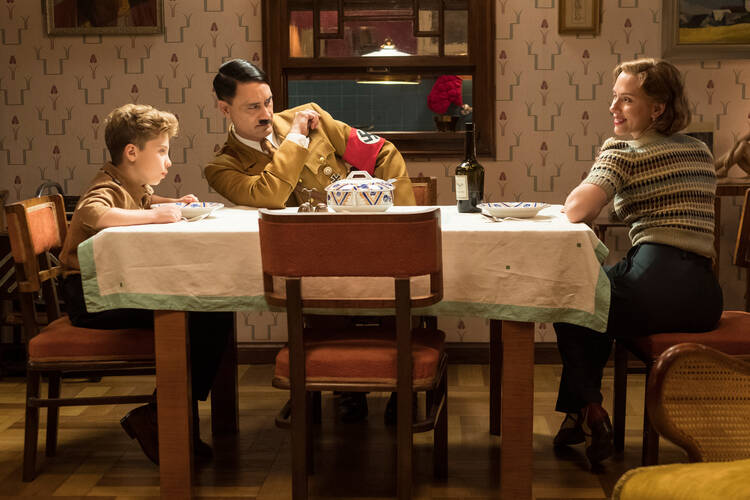 With this quote in mind, I went to see“Jojo Rabbit,” which has been nominated for six Oscars. It is the latest applicant to an exclusive club: Movies that laugh at Hitler.

“Jojo Rabbit” is the latest applicant to an exclusive club: Movies that laugh at Hitler.

The film’s premise is, if anything, more audacious than anything by Brooks. It follows Jojo, a sweet and manic 10-year-old German boy who is absolutely wild for the Führer. In fact, he has made an imaginary companion out of him and spends his days palling around with a goofy, benevolent Adolph, who eggs him on and encourages him through every woe. One day, Jojo and his buddy Hitler are both horrified to discover that his mother has hidden a Jewish girl in the walls of their house.

What to do? Who to trust? Who to fear? From the very first scene, the movie puts in balance two monstrously weighty forces: Life and death, good and evil, loyalty and rebellion, hope and futility. It whipsaws back and forth between slapstick and horror, comedy and tragedy. I watched, enthralled, to see where it would land.

As a Jew, I am ready and able to laugh at the darkest of jokes. That’s how you make it through the dark. Mel Brooks managed this feat handily in his lesser-known “To Be Or Not To Be,” which contains one scene that shatters me every time.

From the very first scene, the movie puts in balance two monstrously weighty forces: Life and death, good and evil, hope and futility.

Until this scene, “To Be Or Not To Be” is pure comedy; but then the weight shifts, and for a terrible moment, everything hangs in balance. The bumbling crew of actors must smuggle Jews out of a darkened theater bristling with Nazis. In desperation, they disguise the refugees as clowns, and it’s actually working—until one poor old babushka, her wrinkled face pathetically smeared with greasepaint, freezes. So many swastikas, so many guns. It’s too much. She’s weeping and trembling, and the audience realizes something is wrong.

So the leader of the actors looks the Nazis straight in the eye and shouts merrily, “Juden!” He slaps a Star of David on the old woman’s chest, whips out a clown gun and shoots her in the head. POW.

And that’s what saves them all. The Nazis roar with laughter in the dark, and the innocent make it through.

“To Be Or Not To Be” earns the right to make Hitler jokes, because it doesn’t flinch away from knowing and showing what is at stake.

This scene carries the whole movie, because it has the nerve to set aside comedy and make the audience sit for a moment in naked peril: These men are killers. They do laugh at shooting an old woman in the head. The terror is real. “To Be Or Not To Be” earns the right to make Hitler jokes, because it doesn’t flinch away from knowing and showing what is at stake. The ball of comedy bounces because that hard surface is there to hit, however briefly.

There is no such hard surface in “Jojo Rabbit.”

Instead, the ball gets thrown over and over again, but every hard surface turns out to be not so hard after all. Hitler isn’t really Hitler; he’s Jojo’s interior voice. The SS men in their menacing round glasses are easily duped, missing a clue a child spotted. Jokers are secretly in earnest; evildoers are mostly harmless. Everything that looks like a hard surface turns out to be amorphous, ambiguous.

Think of that! It’s a movie full of death and torture, a hunted Jew, public hangings, child conscriptions and countless searing questions about loyalty and danger; and yet I stayed comfortably away from the edge of my seat. If every German is part of the resistance and every Nazi is absurd, what is at stake? Who is the bad guy bringing about all the pain that unfurls so harmlessly before us? Life itself? The failure to dance, perhaps? There is no hard surface, only rubber balls.

It’s a movie full of death and torture, yet I stayed comfortably away from the edge of my seat.

If I could change one thing to help the film become what it promises to be, I would recast the mother, Rosie. Scarlett Johansson tries hard, but she is just not good enough to play what should have been a mysterious, complex role. Rosie should have embodied all the subtle interplay of profound loss and reckless hope, all the contradictions of love and war. Instead, she Benny-and-Joons it, coming off as quirky, coy and little more. At the scene where her son discovers her fate, I felt mild regret. I should have been sobbing.

The other performances, though, are flawless. Taika Waititi as Hitler is riveting as he segues smoothly back and forth between spittle-flecked rants and a swishy flamboyance. Sam Rockwell as the dissolute-but-not-lost Captain Klenzendorf thoroughly inhabits his role. Rebel Wilson amuses as Fraülein Rahm. Thomasin McKenzie provides a satisfyingly sharp and human performance as the Jewish girl, Elsa, and is as mean, sad and warm as you would hope. And Roman Griffin Davis as Jojo is miraculous, just excellent. The movie brims with beauty, and I wanted to love it for the gorgeous set and costumes alone. It was fascinating from start to finish. But it just didn’t deliver what it promised.

There aren’t really rules in comedy. Artists are entitled to try for a new kind of movie that works in unexpected ways, even about topics like Hitler. But even in innovative movies, the viewer has a legitimate need for coherence of some kind. This movie gives us striking visual touchstones— the rabbit, the knife—and then abandons them, only to take up new ones—the butterfly, the shoelaces. It could have run with the idea that “Perhaps we’re all just ghosts now and don’t even know it,” but it simply drops this line in our laps and flits away. It could have developed Jojo’s facial scars into something, but instead they simply fade.

The film closes with a quote by Rilke: “Let everything happen to you. Beauty and terror. Just keep going. No feeling is final.” I read this as, “Confused, suckers? Luckily that’s exactly what we were going for, so I guess we’re done here.” If there is any point at all, it seems to be that, like the mythical Jews in Jojo’s book of propaganda, people are attracted to ugliness. So what? I don’t know.

Early on, the sadistic Hitlerjugend insist that Jojo earn his uniform by wringing the neck of a soft, trusting rabbit. He refuses and runs away, because he is a little boy, not an evildoer. “You’re 10, Jojo. Start acting like it,” Hitler tells him elsewhere.

The movie likewise offers itself the chance to declare itself for what it is: something audacious, something new. It dresses itself up as a stunning new kind of satire that has the guts to follow through on a bold and perilous premise, and it should act like it. It should have the guts to wring our necks. Instead, it turns and runs.

I’m still not entirely sure why this movie failed. All I know is that I laughed, but I never cried.