‘The Irishman’ Review: An epic look at death, sin and organized crime from Martin Scorsese 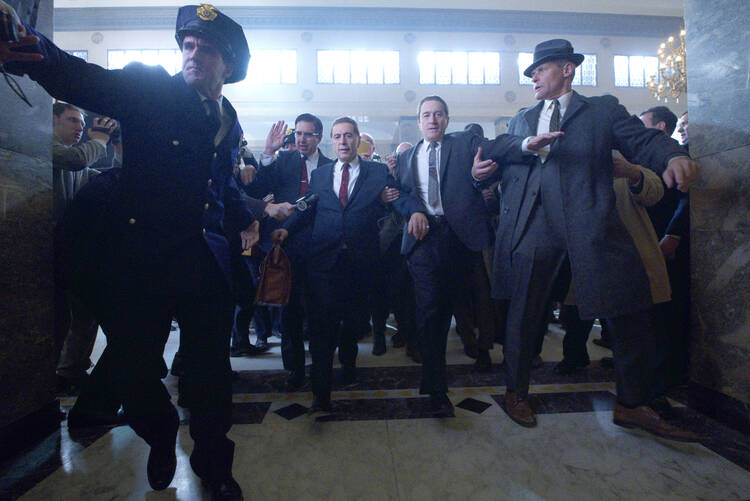 There has never been any shortage of superlatives lavished upon Martin Scorsese, but where his body of work has gone underappreciated is as an alternative history of the United States. “Taxi Driver” was the definitive portrait of 1970s angst and urban decay. “Goodfellas,” a vibrant street-level crime saga, was also a sidelong glance at American class, ethnicity and religion. The story of Las Vegas, a la “Casino,” would never have been told in a textbook. “The Aviator” was about Howard Hughes but also about media, industry and infant Hollywood. And let’s not even get started with the inherently revisionist “Gangs of New York.”

Scorsese’s standing as the Howard Zinn of cinema has never been more apparent than in “The Irishman.”

Scorsese’s standing as the Howard Zinn of cinema has never been more apparent than in “The Irishman,” a film of epic length (3 1/2 hours), epic ambition and epic scope. Its narrative focus is the Philadelphia underworld, hitman Frank Sheeran (Robert De Niro) and Sheeran’s years-long relationship with the longtime Teamsters union president Jimmy Hoffa—played by Al Pacino, delivering a memorable portrait of the most famous American labor leader who ever lived and, just as memorably, died. (And Scorsese tells us how.) But “The Irishman” also manages, in its oblique way, to provide new insights into the Robert F. Kennedy-led racketeering hearings of the late ’50s, his brother’s election as president, the Bay of Pigs invasion, the J.F.K. assassination and Watergate.

History is inseparable from the passage of time, and people. Likewise “The Irishman.” It may never become as beloved a part of the Scorsese canon as, say, the dangerously exuberant “Goodfellas,” but that is because mortality and finality are such essential elements of its DNA. It isn’t just the action of the film that speaks to death—Frank killing this one or that one, making a mess of the infamous Joey Gallo assassination at Umberto’s Clam House or tossing yet one more murder weapon into a Philadelphia river. No, the morbidity of “The Irishman” is rooted in the marvels of modern technology.

The morbidity of “The Irishman” is rooted in the marvels of modern technology.

“The Irishman,” many readers will know, de-ages its aging stars. De Niro, Pacino and Joe Pesci—who gives the film’s most nuanced and quietly spectacular performance—have been doused in some fountain of graphic youth to play their characters’ younger selves. (They are also aged by makeup, which hasn’t been as remarked upon but is just as essential a part of the movie’s impact.) Different viewers will probably respond to these processes differently, perhaps according to his or her own age or familiarity with the actors in question. As far as this viewer was concerned, the cinematic trickery only emphasized the notion that “to dust ye shall return,” regardless of computer assistance to the contrary.

Scorsese is fully aware of this, of course. While immersing himself in the genre for which he is best known and the times he has lived through, he has also surrounded himself with people with whom he has done some of his best work. (De Niro and Pesci but also the longtime editor Thelma Schoonmaker, the cinematographer Rodrigo Prieto and the screenwriter Steven Zaillian, who also scripted “Gangs of New York.” Harvey Keitel appears in a minor role, as if to provide closure.)

Scorsese is certainly the great Catholic filmmaker of our times, Robert Bresson with knives and guns.

He executes with casual fluency the visual virtuosity for which he has become known, alchemizing the incidental into the sublime. It probably won’t be Scorsese’s last movie (he’s only 76), but with “The Irishman” he is assessing his career as a storyteller and even storytelling itself. Alongside the film’s general sense of valediction, there is a recognition that the narratives to which he has devoted his life are inherently unjust. Life is not linear. Stories are. Stories require answers and conclusions. A character like Frank Sheeran provides none of the above. The answer to the mystery of Frank belongs to God.

Dana Stevens, the respected Slate critic, refers to Scorsese in her “Irishman” review as “our great modern poet of organized crime.” Perhaps. (There is a certain other filmmaker, initials F.F.C., who might also deserve that appellation.) Scorsese is certainly the great Catholic filmmaker of our times, Robert Bresson with knives and guns, one who regards sin as something that must be confronted or even embraced in order to be understood. He is our great anatomist of evil, and crime has served Scorsese well—but only because of its proximity to evil. It is the study of evil, its nature and its amorphous qualities, that he has always been concerned with. This was as true of “Kundun,” “The Last Temptation of Christ” and “Silence”—to name three examples of Scorsese-ian magnificence and spiritual humility—as it was of “The Departed” and “The Wolf of Wall Street.” It is certainly true of “The Irishman.”

As a narrative about narrative, “The Irishman” consists of flashbacks within flashbacks, stories about stories. When we first see him, Frank, wrinkled and enfeebled, is being interviewed at his nursing home (by whom we will find out later). What he recalls—and we see—is a road trip taken by himself and his mentor and partner, Russell Bufalino (Pesci), a kingpin of Philadelphia organized crime. It’s 1975, and they are en route to Detroit to see Hoffa.

They don’t think they live in a godless universe. No Scorsese character does. Neither do they stare into the abyss. They just ignore it.

With them are Frank’s wife, Irene (Stephanie Kurtzuba), and Russell’s wife, Carrie (Kathrine Narducci), a pair whose purpose in the film is to nag Frank into making frequent smoking stops in order that the tale can wend its way from the ’50s through the ’70s and beyond. The two actresses, both terrific in their limited duties, seem to punctuate the point that women have played relatively minor roles in Scorsese movies (“Alice Doesn’t Live Here Anymore” being one glorious exception). So does the fact that the most important woman in this film has only two lines.

Peggy Sheeran (Lucy Gallina as a child, Anna Paquin as an adult) watched as her father beat a local shopkeeper in the street for having shoved the little girl over some disagreement in his store. It changes her outlook toward her father and the world. “She doesn’t talk to me,” Russell laments, during some family celebration; Frank tries to console him by saying, “She doesn’t talk to me either,” and what the viewer realizes is that Peggy is a gifted judge of character and our barometer of morality. She becomes closely attached to another family friend—Hoffa—because Hoffa is a person who is naturally gregarious and instinctively honest, even about his corruption and his temper. He is guileless in his own warped way. Frank and Russell, conversely, are fully aware individuals, perpetrators of crime despite that awareness. They have made a commitment to their craft, such as it is, and follow its union rules. They don’t think they live in a godless universe. No Scorsese character does. Neither do they stare into the abyss. They just ignore it.

Martin Scorsese on his faith, films and “Silence”
America Video

This is most true of Frank, a perfunctory Catholic (America’s James Martin, S.J., can be glimpsed in the film, performing baptisms for two of Frank’s children) and a man for whom murder was a career opportunity. He is one of De Niro’s more elusive characters, not really the center of any of the film’s major conflicts but attendant to them; not a man of action like Russell or Hoffa but a mediator between their warring factions or that of the dissident Teamsters leader Tony Provenzano (the startling Stephen Graham).

De Niro’s performance must present the most difficult thing for an actor, a character with very little substance to hang on to. Even in his decrepitude, Frank resists absolution—his scenes rebuffing his priest at the nursing home are remarkable. While Pacino fulminates and Pesci seethes, De Niro presents us with a character who all his life has lived in a kind of limbo. It is hard to say what the real Frank Sheeran was like (there are interviews on YouTube), but Scorsese’s version might be said to have such a casual way with death because he never really lived.

I can't wait to see this film. In the 50sand 60s I had many meaningful encounters with the Mafia, including an offer to send me to an Ivy League law school so I could run one of their legitimate businesses, and may aunt's decision, despite backing from big name New Yorekrs, not to open her own reastaurant lounge because it would require involvmenet with the mafia (extortion based commerical trash collecting). I also dated. a mafia princess who attended a cousin's Catholic school.My aunt also had Jackie and Robert Kennedy as private clients as well as the int intellectualand cultural elite of New York. My mother got me a good summer college job through her friendship with the nother of a gangster union boss. That was NYC back then. From all these encounters my imagination conjured up a theory of the real mission of the Mafia: Thay saw themselves as aganets of God, like Satan, to test people. If you refued to be involved with them you were left alone, to God. If yoy did get involved with them you were a sinner deserving of all punishments here on earth as well as afterwards.
mate businesses.

Great Catholic filmmaker of our time? A bit hyperbolic I think, but certainly one of the masters of the form. I like to share a comment that Scorsese's childhood parish priest shared after seeing one of his early films: "Too much hell. Not enough heaven Marty."