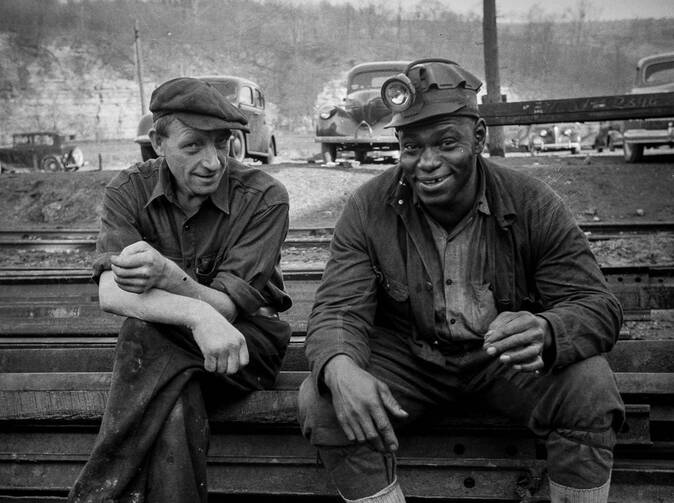 This summer, I visited Scranton, Pa., with my family. We saw the New York Yankees’s AAA team, the Scranton/Wilkes-Barre RailRiders, beat the Louisville Bats, 5-4, and visited various locales referred to in NBC’s classic sitcom “The Office.” We also plunged 300 feet underground for the Lackawanna Coal Mine Tour, hosted by a knowledgeable young woman who did not shy away from the more gruesome details of mining: deadly explosions, deplorable conditions, laborers who were sometimes younger than my youngest child, age 11.

At one point, our tour guide asked: “Any questions? You really should have questions!”

This was meant as comic relief, but it also illustrated a crucial point. Too often, we simply assume the profound wear and tear of mine work—hauntingly illustrated in a series of iconic photos taken by Lewis Hine only about 100 years ago—was the natural order of things, and that things simply were fine and dandy on their own. But if anyone inquired as to why things finally got a little better for Scranton’s miners, a big part of the answer would be unions. They were “the major force in ending sweatshops, making coal mines safer, and eliminating many of the worst, most dangerous working conditions in the United States,” the veteran New York Times journalist Steven Greenhouse writes in Beaten Down, Worked Up, an inspiring if occasionally frustrating book.

By now, the grim state of affairs for American workers has been well documented. “Labor unions represent just 6.4 percent of America’s private-sector workers and 10.5 percent of workers overall,” writes Greenhouse. “That’s the lowest percentage in more than a century and down from 35 percent in the 1950s.” He adds: “Labor’s share of national income has fallen at a faster rate in the United States than in any other major industrial nation since 1995”—this at a time when “the income of the richest one percent has risen to its highest level since the 1920s.”

In short, Greenhouse argues, “Something is fundamentally broken in the way many American employers treat their workers.”

From here, things get a little messy. First, there are certain inconvenient political realities.

In 2016, “blue collar whites”—many of them union members and beneficiaries—“gave Trump the margins he needed to win Michigan, Pennsylvania and Wisconsin, and with those states overall victory,” writes Greenhouse.

In short, Greenhouse argues, “Something is fundamentally broken in the way many American employers treat their workers.”

This happened even though as a candidate Donald Trump, like most national Republicans, was explicit about his plans to appoint judges and cabinet heads with anti-union records. Look no further than the president’s nomination of Eugene Scalia as labor secretary back in July. Not only does Scalia have a long, pro-corporate record as a lawyer; it was the death in 2016 of Scalia’s father, Supreme Court Justice Antonin Scalia, that thrust pivotal union court cases back into the political spotlight.

Had Trump lost in 2016, a more labor-friendly replacement for Antonin Scalia might have made it to the Supreme Court and might have voted to reconsider cases like Janus vs. A.F.S.C.M.E., which made it much more difficult for public sector unions to organize. (Full disclosure: I belong to two such unions.) But Trump won, then nominated Neil Gorsuch to the court, and the rest is yet another sad chapter in American labor history.

Greenhouse attempts to make the case that amid these dark clouds, there are silver linings: Las Vegas’s Culinary Workers Union Local 226, The Coalition of Immokalee Workers (C.I.W.) in Florida, the St. Paul Federation of Teachers, the Fight for $15 campaign, which successfully lobbied for minimum-wage increases in numerous cities. All of these success stories are vividly sketched by Greenhouse, who illustrates the tangible ways they have improved the lives of workers like Francis Garcia, a 39-year-old housekeeper at the MGM Grand on Las Vegas’s famous strip. Garcia can now “support a family without needing food stamps, Medicaid, or housing subsidies.” These reports from the front lines are encouraging, and they make it painfully clear that some corporations are as “dependent” on the social safety net as the “public charges” fiscal conservatives love to shame.

Somewhat more muddled are Greenhouse’s forays into the past. Chapters on showdowns at General Motors in the late 1930s and the 1968 Memphis sanitation workers’ strike make vital connections between labor’s past and present. But as Greenhouse acknowledges, this book is “not a detailed, comprehensive [labor] history.” And so explorations of figures like Walter Reuther and George Meany veer into cultural terrain Greenhouse does not explore with sufficient complexity.

The past, after all, can be as misleading as it is revealing, especially when it comes to the postwar United States.

“The decades when unions were strongest—the 1940s through 1970s—were the decades when there was the least income inequality,” Greenhouse writes. True enough. But it can just as easily be argued that strong unions did not lead to that equality, that they were more a byproduct of historical developments highly favorable to the United States and not likely to be replicated. Greenhouse might have gone further back to labor struggles during the 19th-century Industrial Revolution, when the rapid pace of innovation, the levels of radical violence and the immigrant-heavy workforce might  have offered more provocative lessons for today. (Following our Lackawanna mine tour, my children could have purchased a T-shirt celebrating an Irish mining society, the Molly Maguires, some of whose members countenanced violence. Imagine the furor over an equivalent immigrant labor organization today.)

In the end, for all the energetic organizing Greenhouse chronicles, he reminds us: “Nowadays, the political landscape in Washington and many states is...more hostile towards labor than at any time in decades.” Then there is the highly fractured, rapidly evolving ways technology has altered the nature of work and the lamentable belief that there is something cool about juggling multiple “gigs” and “hustles.”

Finally, there is the inconvenient truth that it is actually conservatives who have built the most effective job-building coalitions in recent decades. Their pro-business agendas are beloved by more affluent, corporate types, while populist messaging—including racially charged punches aimed downward at the already-marginalized—appeals to many voters of more modest means.

It is easy to lament this “What’s the Matter With Kansas?” kind of thinking, that blue-collar Americans can be duped into voting against their economic self-interest. But it is going to take much more than moral superiority to build on the (modest) gains Greenhouse highlights. He notes that “Pope Francis has championed unions, especially for workers on the bottom.” There are also references to the National Council of Churches’ work with the Coalition of Immokalee Workers., as well as “labor-religion coalitions” formed under the former A.F.L.-C.I.O. president, John Sweeney, suggesting that faith-based organizations are fertile ground for further coalition building. It would also help if lawmakers who tout their Christianity could explain what aspect of their devotion justifies a terrible record on labor issues. Because, in the end, the biggest challenge unions face is not technology or internal division, but the depth, intensity and brazenness of their opposition.

Not long ago, a Lewis Hine photo of child mine workers whipped its way around the Internet. Was it a plea to organize today’s exploited and downtrodden? A testimony to the fraternity and dignity of all workers? Nope. It was used as “proof”—historically false in countless ways—that the Irish in America were “slaves” who were “treated worse than any other race in the U.S.” but didn’t “moan about how the world owes them a living.”

Any questions? We all should have questions.

This article also appeared in print, under the headline “Hard Work, unrewarded,” in the October 14, 2019, issue.

Tom Deignan, a regular America contributor, has written about books and history for The New York Times, The Washington Post and the National Catholic Reporter.