30 years after her debut, Selena is the icon we need today.

30 years after her debut, Selena is the icon we need today. 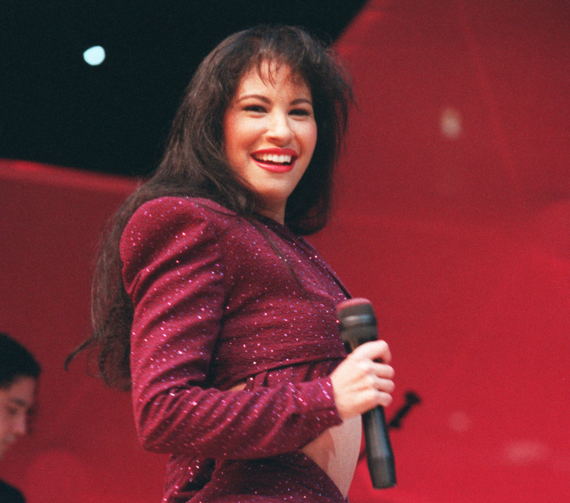 Because I grew up in a Mexican-American home, first in California and then in Texas, the sounds playing from our radios, were different from those of my peers. “You’ve really never heard this song?” people would ask me incredulously when The Beatles came on. “But it’s Zeppelin,” people stressed, as I shook my head and shrugged my shoulders. “I’m sorry, my parents never listened to that,” I would explain matter-of-factly.

Our music superstars sounded and looked a little bit different, one woman, in particular. She was known as La Reina del Tex Mex, the Queen of Tejano music: Selena Quintanilla.

Selena grew up just outside of Houston, in Lake Jackson, Tex. Her father, Abraham Quintanilla, was a musician in a band called Los Dinos in Corpus Christi, Tex. This was the band Selena would inherit at the age of 10 with her two siblings, A.B. and Suzette Quintanilla. Slowly, Selena y Los Dinos rose up the Texas music charts, charming listeners with their Tejano sound, an eclectic mix of traditional Mexican folk songs and polkas—with touches of American rock, blues and country—that originated in central and southern Texas.

What made Selena’s music cutting-edge, however, was her fusing of traditional Tejano with cumbia, a percussion-driven musical style from Colombia.

Growing up, Selena was who we aspired to be. She was beautiful, successful and talented. She was both Mexican and American, never fully belonging in either camp. She was Texas, personified.

Selena released her first self-titled album, “Selena,” on Oct. 17, 1989. This album marked her debut onto the national music charts, where the album spent 19 weeks on Billboard’s Top 20 Regional Mexican Albums, peaking at seventh for the week of March 24, 1990. A year later, Selena released her second album, “Ven Conmigo.” The second single from that album, “Baila Esta Cumbia,” became one of Selena’s most popular songs and immortalized her as the Queen of Tejano music.

“Baila Esta Cumbia” launched an international and intercultural fascination with Selena, but she had already won hearts in her native Texas. At the age of 15, Selena won Female Vocalist of the Year at the Tejano Music Awards, and two years later, she won Female Entertainer of the Year, a category she would continue to dominate. Selena also became the first female Tejano artist to win a Grammy, in the category Best Mexican-American album, for her 1993 album “Selena Live!”

In 1995, Selena released her fifth studio album, “Dreaming of You,” which became the first predominantly Spanish-language album to debut at No. 1 on the Billboard 200 chart. It would go on to sell a record-breaking number of units, raking in the second highest first-week sales for a female musician at the time. What was supposed to be Selena’s first crossover album, however, ended being Selena’s last studio album.

Review: Can Mexican-Americans find a home in the United States?
Vivian Cabrera

Identity is so intertwined with language. Speaking Spanish is how you communicate with your grandparents and relatives who never mastered English. It is how you learn about your history. For some, knowing the language is the gold standard of what it means to be Latinx. We hear this in the common lament: “You need to practice your Spanish so you don’t forget where you come from.” I grew up speaking Spanish and do treasure that connection to my family and heritage. But many people in the Latinx community in the United States, including Selena, have a different experience.

A third-generation Mexican-American, Selena did not grow up speaking or hearing Spanish at home. For an artist dreaming of breaking through in the Spanish market, this was an obstacle. Selena learned enough Spanish to sing her songs, classics like “La Carcacha,” “Bidi Bidi Bom Bom” and “Como La Flor.”But it was not until she broke into the international music industry that she realized the significance of the Spanish language for her community.

In the book To Selena, with Love, written by Selena’s husband and bandmate, Chris Perez, he remembers a media appearance Selena made in Mexico. He writes:

With the journalists, Selena was as personable as ever, giving each media personality a warm hug and a big smile, winning them over before she ever had to say a word. As a third-generation Texan who had to learn Spanish phonetically, with her father coaching her on her accent, she knew that there was a chance that the Mexican fans might dismiss her. Instead, they adored everything about her, from her dark hair and brown eyes to her curvy figure.

He continues: “In Mexico, Selena mangled her conversations in Spanish like the rest of us, but not for long. She would say, ‘It’ll be cool. You watch. I’m going to learn Spanish and surprise everybody.’” And she did.

We continue to place our hopes and dreams on this young woman who helped Mexican-Americans finally feel like we belong.

Selena is that karaoke song I never find the courage to sing, the soundtrack to the Latinx experience. Even when I left home for college and experienced bouts of homesickness, I would listen to a Selena playlist on Spotify and be transported back to my house on Saturday mornings—infamous in the Latinx community as the time to clean everything. I would think of car rides to the grocery store with my parents. I would return to the many quinceañeras, baptisms and house parties when “Techno Cumbia” would play on the speakers and everyone—moms, dads, tias, tios, primas and amigos—would rush to the dance floor, singing along with our queen:

Many people are familiar with Selena because of the 1997 eponymous biopic, which launched the career of its lead actress, Jennifer Lopez. But for Mexicans and many Latinx, she was an icon before the film “Selena.”

Growing up, Selena was who we aspired to be. She was beautiful, successful and talented. She was both Mexican and American, never fully belonging in either camp. She was Texas, personified.

Selena was 23 years old when she was murdered by the president of her fan club, Yolanda Saldívar, on March 31, 1995. A young woman at the prime of her career, she was a revolutionary figure who became a sign of hope for a community that is often discarded. She was loved and adored by all, a love she returned.

We continue to place our hopes and dreams on this young woman who helped Mexican-Americans finally feel like we belong. There is no saying who she would have become had she lived. Today she would have been the same age as my parents, eerily enough. But I know for certain that we would continue to bet on her. Everything for Selena.

May she Rest In Peace.

May she Rest In Peace.

This article also appeared in print, under the headline “An Icon and an inspiration,” in the October 14, 2019, issue.

Vivian Cabrera is an assistant editor at America.