The hopeless (yet Christian) world of Pier Pasolini’s ‘Salò, or The 120 Days of Sodom’ 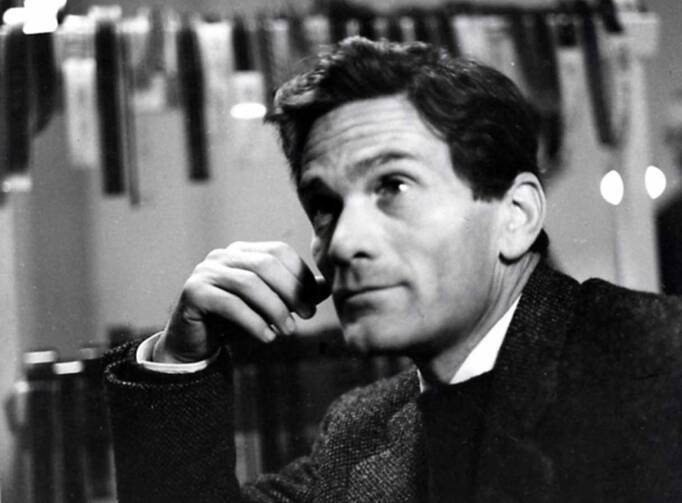 Pier Paolo Pasolini in 1964. “Salò, or The 120 Days of Sodom,” was the last movie Pasolini filmed before his murder. (Wikimedia Commons)

There are 13 directors whose films are recommended by the Vatican for their depiction of religion, but not all led lives notable for their sanctity. And one went on to direct the most notorious art film of all time. It is unlikely that the Vatican will ever praise “Salò, or The 120 Days of Sodom,” the last movie Pier Paolo Pasolini filmed before his murder. Yet that film’s anthropology—its account of what it means to be human—is even more uncompromisingly Christian than Pasolini’s 1964 “The Gospel According to Saint Matthew.” “Salò” depicts a world of Christian anthropology without Christian eschatology—a world where human beings are made in the image of God, and there’s no hope.

Pasolini called “Salò” his first film “about the modern world.” By contrast, his “Gospel” is a mix of peasant piety and Marxist class analysis, with a Jesus more prone to haranguing than forgiving. Pasolini defended the film’s few miracles—among its most effective scenes—against criticism from Marxist comrades by saying he wanted to represent the “subjective reality” of the Italian peasantry. Many of his films show this desire to enter into (or project onto) a peasant or premodern imagination, including the “Trilogy of Life” that immediately preceded “Salò.”

The films in the “Trilogy of Life” are all, like “Salò”(and like “Gospel,” with its parables), adaptations of works in which the act of storytelling plays a central role: “The Decameron,” “The Canterbury Tales” and “Arabian Nights.” They work well as a trilogy; they are lush and loping, urgent and optimistic, with just a hint of memento mori. Sex is play. Consent is treated casually since all young beautiful people inherently want to couple with all other young beautiful people. Nobody gets pregnant. The storytelling framework, to the extent that it has any thematic purpose, creates a Vegas feeling of freedom: The tales are colorful, amoral cities that bloom in the desert of reality by sheer force of human imagination. The three films are too haunting and strange to be merely silly—but too banal in their view of human nature to be fully sublime.

The film is aggressively artificial, and yet the artifice offers no protection for the audience.

Pasolini came to repudiate these films, in an essay called “The ‘Trilogy of Life’ Rejected,” and “Salò” is often treated as the fruit of that repudiation. When Pasolini talked about “Salò” he expressed fury at the contemporary world. He lamented the way the sexual revolution had ossified into its own rules and expectations: “Sex today is the satisfaction of a social obligation, not a pleasure taken against social duty.” He found pop culture more threatening than political repression: “[T]he real violence is television.”

Pasolini made “Salò” sound programmatic. Censors and audiences initially treated it as pornographic—but disappointingly unsexy. “Salò” was the subject of lengthy court battles (during an era when Italian theaters happily showed films with titles like “Too Nude to Live”) and the film critic Naomi Greene recalled, “When I finally saw “Salò”in my Roman neighborhood movie house, I remember hearing cries of brutto (“ugly”) from dismayed and disappointed viewers.”

“Salò” is ostensibly set in a real time and place, a short-lived fascist “republic” created by Benito Mussolini under German occupation. This was a controversial choice (fascist rule was well within living memory) and may seem like a distracting one, given that most of the film takes place in the enclosed, fairy-tale world of a villa taken over by the fascists. The rhetoric of the public officials (The Duke, The Bishop, The Magistrate and The President) who control the action moves freely between actual fascist slogans and rules taken from the Marquis de Sade’s writings. The film claims a kinship between real and imagined deaths; this, in fact, is its central philosophical claim, that political and pornographic dehumanization are the same kind of fantasy.

At the start of the film the officials, with the help of three storytellers and various accomplices, select a group of 18 local youths of both sexes. These victims are told the rules “that will govern your lives”: heterosexual intercourse will be punished by mutilation, and “the slightest religious act committed by anyone will be punishable by death.” The rest of the film takes place inside the villa, moving with Dantean relentlessness from the “Circle of Manias” to the “Circle of Shit” (featuring the film’s most infamous sequence, a coprophagic wedding banquet) and at last to the murderous “Circle of Blood.” Each movement of horror and domination is preceded by storytelling. The storytellers, all women dolled up in gowns and furs, describe their adventures in prostitution. They play up how much they loved the degradations they recount, and these stories excite the officials to enact various cruelties on the youths. The storytellers’ own helplessness emerges only in glimpses, as when one of them conspires with the silent piano player to rescue a girl from execution by performing a bizarre comedy routine.

The overwhelming emotion of “Salò” is dread.

The film is aggressively artificial, and yet the artifice offers no protection for the audience. The Cubist art on the walls, the gowns, the tales, the piano, the sheer absurdity of scenes like the pagan drag “wedding”—none of it offers the relief of camp. When the fascists scream at their victims to laugh, it isn’t funny. The absurdity is abusive—you can’t reason your way to an understanding of us or a prediction of what we will do to you.

In “Salò,” spectatorship is domination, and the viewer is a complicit spectator. Many scenes are framed by doorways and windows; the shots often place the action at the exact center of the frame but far away, calling maximum attention to the camera eye. But the film resists the audience’s desire to see and linger. Pasolini does us the great kindness of making the film unpleasant to watch. (You can tell it is not pornographic because nobody enjoys it!) Physical violations are typically filmed from afar and with the victims’ bodies obscured. “Salò” offers a lesson in how to depict cruelty without re-enacting it—a lesson few filmmakers even want to learn. Nor do we get to know the victims as people. To give them personalities might imply that these personal characteristics are what make their suffering horrific. In “Salò,” it is simply the fact of their humanity that makes their degradation wrong.

There are two moments when the film “breaks character.” One guard is caught having consensual, heterosexual intercourse with a servant; before the officials shoot him, he raises his fist in a gesture of protest and the powerful men fall back, momentarily disconcerted. This is the one sentimental element in a film that otherwise offers no comfort to the audience.

And there is a moment toward the end when a girl, sitting naked in a tub of the victims’ excrement, cries out in anguish, “God, God, why did you abandon us?”—as the guards outside the door play cards. This allusion to Jesus’ cry from the Cross, and to the soldiers who diced for his clothes, is the one moment when Christianity appears in the film’s structure—as a story the film is telling or at least relying on to express a truth, rather than merely as a belief held by some of the victims.

The overwhelming emotion of “Salò” is dread. (The second time I watched it I was startled at the brevity of many of its most searing scenes.) The storytelling exists to provoke anticipation in both officials and audience—and dread in both victims and the audience. Dread is torture that takes place in the imagination; and “Salò” is, above all, an attack on the imagination. The essence of torture is not violence or physical pain but the dehumanization that necessarily precedes any cruelty. Torture requires a story in which the victims deserve it, do not matter, are objects, are fungible and available for consumption. The closest cousin to “Salò” is not another ’70s Italian rumination on the sexuality of fascism, like Liliana Cavani’s “The Night Porter.” It is Joshua Oppenheimer’s 2012 documentary “The Act of Killing,” in which he encourages members of Indonesian death squads to re-enact their killings in increasingly flamboyant scenarios, revealing the influence of Westerns and gangster flicks on the killers’ self-concept. This repeated storytelling brought some participants to doubts and remorse, though they had initially used storytelling to defend against repentance.

“Salò” is less hopeful: a story, woven from stories, about the power of stories to destroy.