Review: In ‘Midsommar,’ evil doesn’t strike in the shadows 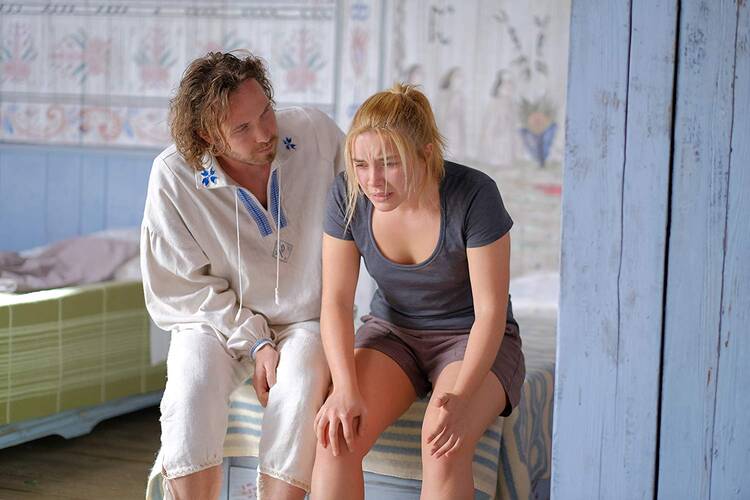 In Ari Aster’s “Midsommar,” the devil is not an ugly monster hiding in the shadows—he is in the daylight, dressed in a white robe and a crown of flowers.

The film takes place at a traditional festival of the summer solstice in the fictional commune of Hårga in Hälsingland, Sweden. Our protagonist, Dani (Florence Pugh), still grieving from a family tragedy, decides to tag along on what is meant to be an all-guys trip with her boyfriend, Christian (Jack Reynor), and his friends, all of whom are working on their theses.

Their arrival in Sweden starts with dancing, feasting and psychedelic mushrooms, but it gradually turns into a really, really bad trip—pun intended.

The film’s two-hour, 27-minute runtime draws out the horror to an agonizing length, much like the days in midsummer Sweden.

Upon their arrival, it seems like the festival will be exactly as Christian’s friend and Hårga native Pelle (Vilhelm Blomgren) describes, just “special ceremonies and dressing up.” Everyone wears white floral clothes, the gang is offered weird food and drink, and the elders lead the village in traditional chants and feasts. There are a few unexplained things here and there—Pelle makes a comment that seems to imply no one among the Hårga lives past 72, and the community is strangely nonchalant about a bear in a cage.

The film’s two-hour, 27-minute runtime draws out the horror to an agonizing length, much like the days in midsummer Sweden are drawn out to roughly 20 hours, with the few hours of “night” never getting darker than twilight. “Midsommar” lures the viewer, like its characters, into a sense of security with its bright colors, often-sweet score, beautiful cinematography and even comedic relief.

One almost forgets this is a horror movie, which makes the first gruesome human sacrifice rituals at Hårga even more horrific. Part of the horror is that, to the seemingly normal people of this village, nothing that is happening is horrific. When the visitors react with shock to these rituals, an elder is quick to respond that it is “a long, long observed custom.” To some of the outsiders, that is not a good enough excuse, but others, like Dani’s boyfriend, try to “acclimate” to what, for them, amounts to just a cultural difference.

Dani begins to question the commune after this event, but Christian, 2019’s movie boyfriend of the year, brushes aside how disturbed she is. Unlike Christian and his friends, she is not an anthropologist and is less willing to excuse the rituals. In this place of sunlight and summer, she is still haunted by the darkness of her winter loss. She is trying to process her still-fresh grief from her recent tragedy, but she is in a strange place with shocking traditions and no one who really listens to lean on. She starts to pack up and leave, but Pelle shows up for her where Christian fails and calms her down.

One almost forgets this is a horror movie, which makes the first gruesome human sacrifice rituals at Hårga even more horrific.

The film subverts the trope that bright and beautiful equal pure and good but dark and ugly equal evil and corruption, luring its victims with a seductive, pleasant appearance. The festival is a sharp contrast from the dark, snowy world Dani inhabits at the beginning of the film before she goes to Sweden. (There are many dualities in the film—night and day, winter and summer, death and rebirth.)

In this film, the human body gets defiled to the point where it resembles a Giuseppe Arcimboldo painting. At several points in the film, the imagery is so shocking and visceral that I was squirming in my seat. I saw this film twice in theaters, and both times I witnessed the strongest audience reaction I have ever seen in the movie theater. People were moving around, whispering, yelling in shock and even laughing in discomfort from what they were witnessing on screen. One wonders how the Hårga could possibly tolerate the horrors of human sacrifice that their tradition demands. Yet the Hårga defending their atrocities as part of their traditional way of life is a familiar fallacy. Watching the main characters gradually “acclimate” is surprising at first, but one has to wonder if our own culture is, to some degree, not so different. As the director himself put it, “the film’s thesis is [not] ‘lucky Americans, stay in America.’"

The final scene, at once cathartic, mesmerizing and stomach-churning, has stayed with me the most in the days since I have seen the film. The chaos of this scene contrasts a gratuitously grotesque event with striking camera work, vibrant colors, artful set and costume design, and a haunting, beautiful nine minutes of string orchestra. At the end, Dani is faced with a choice: Will she be tempted by the ways of the Hårga or will she snap out of it? Even without dialogue, this moment is the peak of Florence Pugh’s performance, which is stellar throughout the film, conveying so many layers of pain, catharsis and even joy at the same time. (Pugh and the director reportedly disagree on Dani’s degree of self-awareness in this scene, and in order for this film to be redeeming in any way, I choose to side with Pugh on this one.)

“Midsommar” prompts us to ask: What monstrosities are attractive and commonplace in our own culture? Are there ways that we sacrifice human lives in the name of culture and tradition? Americans almost worship guns, weapons of destruction, and the human sacrifice is high—tens of thousands per year in the United States. The rationalization of human sacrifice is perhaps the same, whether it is to protect the rights of a gun owner, purge evil spirits (as in the case of “Midsommar”) or make crops grow (as in “The Lottery,” by Shirley Jackson). Is it not like a death cult to accept no common sense compromises on the Second Amendment tradition at the cost of 100 human sacrifices per day? Have we been seduced by the gun’s cool factor in a first-person shooter video game or action movie?

“Midsommar”makes the case that we do not have to fear the ugly and different. We do need to fear evil dressed up as beautiful and human. The film makes this point by including a deformed, mysterious boy, set up to be the great monster that this horror movie needs. The film subverts its genre when he turns out to seemingly harm no one. In a way, Reuben is just another victim of this commune’s traditions, intentionally deformed and disabled by inbreeding.

The real monster is everyone else.

Mike Seay is an editorial intern at America.

"Evil dressed up as beautiful and human".As in the beautiful and human; [human rights] "reproductive rights" movement which supports the ongoing holocaust [ literally ,as these capable -of -suffering- fetuses are, once killed, incinerated if not used for medical purposes]of the unborn,The evil and horror is underscored in how they will refer to these human fetuses as "tissue."Sorry[not]; though you nailed it regarding analogizing the human sacrifice -for- the- common -good, story of the film, to the second amendment ; where many kids have been sacrificed to that sacred -for -the- common- good 2nd amendment. you left out that [other ] elephant in the room.

It is funny that the author sees gun ownership as the societal evil that is cast in a glowing light. To me it makes an incredibly uncanny depiction of modern Progressivism. Progressivism is cast by the Main Stream Media and our Universities (sadly even "Catholic") in a warm, glowing, loving light yet in reality is monstrous and near diabolical.