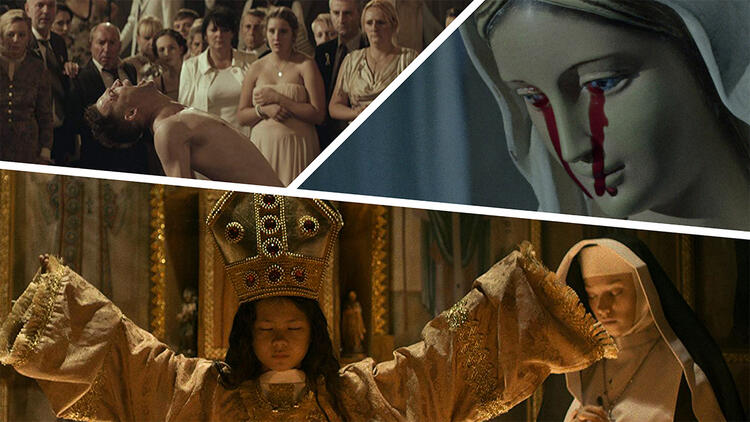 Everybody knows the Catholic Church dominates the world of religious horror films. The sumptuous vestments, the Latin chants, the millennia-old practices—not to mention the extremely literal belief in a living Devil, who, as Pope Francis frequently notes, still works in the world today—all seem custom-made for a genre that evokes rapture and fear. Catholic faith and practices offer a striking visual and auditory language through which horror films can explore the limits of human endurance, the persistence of mystery in a world colonized by science, the realities of death and evil, and the desire for rescue.

And yet discussions of Catholic horror cinema often revolve around the same few films. “Rosemary’s Baby” is fantastic—but there’s a whole world out there! Here are eight films in which Catholic horror speaks in less familiar accents, films I have never seen on other Catholic horror lists.

“The Tenth Victim” (Italy, 1965). Closer to thriller than horror, this film from the “Dolce Vita” era is a romantic comedy about the love between a man and his would-be murderer. The hunted (Marcello Mastroianni) and the huntress (Ursula Andress) are competitors on a government-run reality-TV show about hunting humans, so the press eagerly follows their public chase and covert courtship. It’s a sunny, cavalier, semi-psychedelic film, alive to the religious conflicts of its day. Paganism is retaking the country as the Vatican feebly opposes reality-TV murder. The hunted man makes sure to note that while he is divorced, his marriage was annulled, so he’s available. One of the government slogans for the reality show is “Why Control the Births When We Can Increase the Deaths?” The portrayal of sexual conservatism married to murderous consumerism is done with the lightest possible touch—it’s social critique as soufflé. Both the incongruities and the prescience (not to mention the fashion) will delight contemporary viewers.

Catholic faith and practices offer a striking visual and auditory language through which horror films can explore the limits of human endurance.

“Valerie and Her Week of Wonders” (Czechoslovakia, 1970): a sun-soaked fable of corruption—including sexual corruption within the church. Valerie (Jaroslava Schallerová), a girl who has just reached menarche, discovers that the adults around her, including her long-lost father, the bishop, are vampires. The local beehive, a wooden statue of Adam and Eve in which the bees dwell in their groins, suggests both the weirdness of this haunting film and its insistence that adulthood is a fall from innocence. “Valerie” is staccato and disturbing, with images of incest and of sexual abuse by clergy. It ends with Valerie curled up in her white bed in an autumnal wood: lost innocence nestled in the heart of death.

“Thirst” (South Korea, 2009). A suicidal priest (Kang-ho Song) volunteers to test an experimental medication, which turns him into a vampire. This violent film uses the protagonist’s consecration to intensify vampire films’ themes of sexual sin (in this case, an affair between a priest and a married woman) and sacrilege. All vampire films retain hints of an evil reverse Eucharist (drinking blood gives eternal life). “Thirst” adds desecration of holy orders and of confession. “Thirst” is graphic and nihilist, but in its desecrations it reveals what the church holds sacred.

“The House at the End of Time” (Venezuela, 2013). A woman (Ruddy Rodriguez) returning from prison must serve a kind of house arrest—but her home warps time, returning her to the past, where she tries to understand what really happened the night her husband died and her son disappeared. Her one companion in this struggle is the priest (Guillermo Garcia) who begins visiting her after her release. His steady presence brings her strength, but the climax reveals his own connection to her imprisonment. This is a satisfying film for lovers of justified, emotionally resonant plot twists—and the rare horror film in which the priest is not a symbol of the supernatural, but a counselor and friend.

“Demon” (Poland, 2015). Marriage starts a new life, almost creating a new person from the “two become one flesh.” As Pyotr (Itay Tiran) prepares for his Catholic wedding, his friends joke that he will no longer be the rascal they nicknamed “Pyton.” But a new life can’t be built on an unrepented past. At the wedding, a dybbuk—a Jewish spirit of the dead, which possesses the living—returns to wreak havoc on the celebration and expose the town’s complicity in Nazi persecution of the Jews. “Demon” is stormy, melancholy; like the dybbuk, the film is not confident that anyone will listen.

Many of these films ferociously criticize the evil done by Catholics.

“Neither Heaven Nor Earth” (France, 2015). French soldiers fighting in Afghanistan stumble upon an unintelligible, deadly force that seems to lie hidden, like their Afghan opponents, in the land itself. As soldiers disappear and fear mounts, the captain (Jérémie Renier) calls in an army chaplain, a sharp-tongued Afro-French priest (Steve Tientcheu), who laughs at the idea that Christianity exists to bring comfort. “You think God is a teddy bear you hold at night?” he scoffs, before reading to the soldiers from the Book of Job. “Heaven” is about the defeat of all attempts—including Islamic and Catholic attempts—to cope with the unknown. What lives in the mountains is not God, but “Heaven” suggests that God is more like it than we might prefer.

“Seklusyon” (Philippines, 2016). In the late ’40s, would-be priests head to a remote monastery for a time of seclusion and testing. They are joined by a little girl, Anghela (Rhed Bustamante), who can heal people. The priests battle demonic visions; Anghela comforts them. But her reassurances become disturbing—she offers only comfort, encouraging sin rather than rebuking it. Is Anghela a saint? A victim? Something horrific? In this plainspoken, beautifully shot film, full of striking imagery of light and darkness, the most disturbing shot shows the smile on the face of a newly ordained priest.

“The Devil’s Doorway”: a horror film that gives tribute to the women of Magdalene laundries
Eve Tushnet

“The Devil’s Doorway” (Ireland, 2018): a found-footage film set in 1960 in a Magdalene laundry—a reformatory for outcast women. Two priests, summoned to investigate a purported miracle, discover horrific cruelty toward the inmates—and, in the catacombs beneath the reformatory, evidence of both human and supernatural evil. This harrowing film, anchored by Lalor Roddy’s performance as an old priest-skeptic, was inspired by real abuses in Catholic institutions. And yet the miracle that sets its plot in motion offers Christian hope even to those whom Christians harmed.

Unlike “The Exorcist” or “Rosemary’s Baby,” many of these films ferociously criticize the evil done by Catholics in the name of God: “Demon,” “Devil’s Doorway,” “Seklusyon,” “Valerie.” Yet other themes emerge just as strongly: the power of the sacraments and the horror of sacrilege (“Demon,” “Seklusyon,” “Thirst”); our inability to control or even understand our fate (“Neither Heaven,” “Valerie”); the church as necessary social critic and friend of the suffering (“Tenth Victim,” “House at the End”). Whether you want breezy murder-comedy or wrenching exploration of national guilt, as movies globalize, Catholic horror becomes even more capable of being all things to all fans.

I will have to check these out. I have to say I love religious horror films. I am not sure why.

I believe in the power of exorcism as a prayer which indeed frees people, whether done by priests, or in Charismatic Prayer Groups, I have seen it work and free some people, especially when used with prayers and gifts for normal healing for emotional, mental or physical problems.

Perhaps knowing the reality of spiritual gifts in Christ and their powerful value makes these films seem that much more compelling. My superhero has always been Jesus Christ, and his fiery, passionate and powerful saints (male and female). John 11:43 When He had said these things, He cried out with a loud voice, "Lazarus, come forth." . . . and he did come forth - Can't beat that!

I like religious horror movies too. Some of my favorites are Fallen (Denzel Washington), The Order (Hugh Ledger), The Prophecy (Christopher Walken), Stigmata (Gabriel Byrne).

Had not even heard of any of these other than 'The Tenth Victim". I would add "Magdalene Sisters" 2002, to your list.

Why are you writing on cinema and not critically engaging with the reality that being an LGBT person and Catholic is a horror story of its own for so many people around the world?