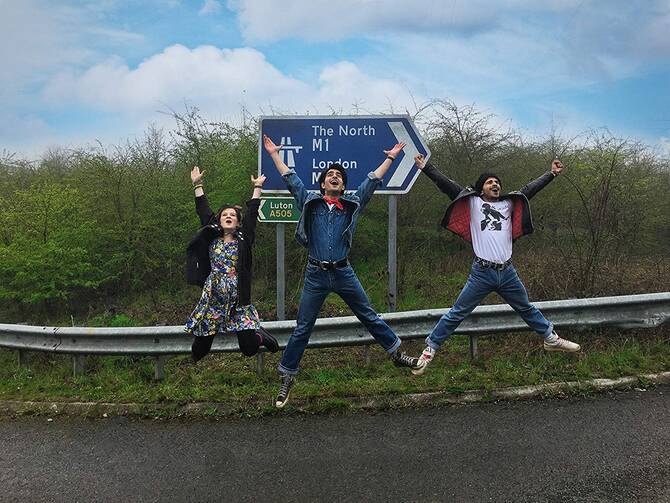 A confession: Simply watching the preview to “Blinded by the Light”—the coming-of-age film directed by Gurinder Chadha (“Bend it Like Beckham”) based on a memoir by the British journalist Sarfraz Manzoor about his life and intense love of Bruce Springsteen—made me tear up.

When I was 17, a friend and I drove 10 hours round trip from Massachusetts to New Jersey in one night with the hope that Springsteen would show up on stage at one of his bandmate’s concerts in Asbury Park. And he did. And we stood for hours next to a man with an image of Springsteen playing the guitar tattooed on his calf and we screamed the lyrics into the night, and when I crawled into bed at 5 a.m. I was never happier. So I get it.

‘Blinded by the Light’ captures the angst and joy of being a teenager.

And yet, even at the peak of my (ongoing) obsession, I did not find myself using lyrics from Springsteen’s music as part of my everyday dialogue, a practice on which the film relies too heavily, lest we miss exactly how closely the character identifies with the music of the Boss. Javed (Viveik Kalra), a Pakistani-British Muslim teen growing up in Luton, England, speaks or sings Bruce lyrics in the face of racist bullies, and before he kisses a girl, and in conversation with a friend. The lyrics literally surround him, appearing as text on the screen as he listens to “Promised Land,” in which Springsteen sings about “heading straight into a storm”—while Javed is forced outside into a literal storm. The method is heavy handed, but the sentiment it conveys rings true for anyone who, as a teenager, has suddenly felt understood by the words of a song. Javed remarks to a friend: “It’s like Bruce knows everything I’ve ever felt.”

“Blinded by the Light” was a Sundance darling and received a standing ovation and a coveted studio deal. Set in 1987, it tells of Javed’s struggle to please his parents and be true to himself in the midst of the austerity of Margaret Thatcher’s Britain and the malign influence of the National Front. Springsteen, Javed’s friend tells him, is “a direct line to all that is true in this shitty world.” And this outlet proves a needed relief as Javed and his family face layoffs, financial trouble, prejudice and violent confrontations. Themes of nationalism and white supremacy remain sadly current and make the images of National Front marches in the streets all the more terrifying.

The film features a surreal and fantastical element through its dance scenes, set to “Born to Run” and “Thunder Road.”

Yet the film also features a surreal and fantastical element through its dance scenes, set to “Born to Run” and “Thunder Road,” which seem specifically designed to unabashedly celebrate the music of the Boss rather than further the plot. They’re sweet, but a bit self-indulgent at times with choreography that, for better or worse, feels true to a group of high school kids.

The film offers solid acting and a compelling portrait of the particulars of family life and the first-generation immigrant experience. It starts with the epigraph, “Talk about a dream, try to make it real,” a line from Springsteen’s “Badlands,” and focuses on Javed’s hope of becoming a writer, despite his parents’ desire for him to choose a more respectable profession. In one of the film’s final scenes, Javed offers a speech at a school assembly. He notes that Springsteen’s music is about “working hard and holding on to your dreams and not letting the hardness of the world let the best of you slip away.” He hopes that his desire to be a writer will help to “build a bridge to my ambitions but not a wall between my family and me,” which, though it feels a bit like a thesis statement, is still a much-needed message of grit and unity.

What the film lacks in nuance it makes up for in heart. It captures the angst and joy of being a teenager. And it helps to translate for the more casual Springsteen fan how music largely about the working man, written by someone who has never held a 9 to 5 job, can feel so true both to Pakistani-British teens in Luton and Irish-Catholic teens in the suburbs of Massachusetts.

Bruce Springsteen’s music is about movement, about freedom, about longing for something you can’t quite name but know is out there. For a teenager, simply feeling like you’re going somewhere, anywhere, is half the battle. “Blinded by the Light” serves as a sweet reminder that we’re not alone on the ride.

You can't write this without a reference to Manfred Mann? Do wah diddy then.