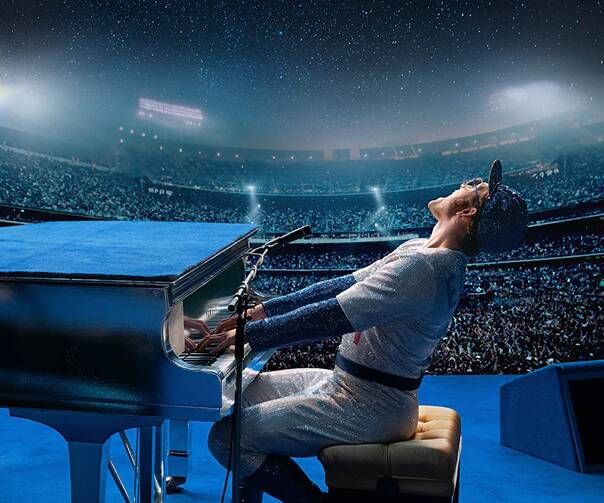 Elton John is played by a terrific Taron Egerton in ‘Rocketman’ (photo: IMDB)

There is an early moment in “Rocketman” when the not-yet-Elton John gets some advice from a member of a touring soul-music revue, for whom the wide-eyed innocent is playing piano. “You got to kill the person you were born to be,” he is told, “so you can become the person you want to be.”

“Rocketman,” a rock ’n’ roll fantasia, is basically about how the now-iconic pop star took that advice, and didn’t, and in some ways couldn’t. Reinvention is no easy feat, not when you have grown up an unloved, bespectacled, closeted middle-class Brit with a name like Reg Dwight, parents out of a Roald Dahl novel and a hairline that is rapidly heading north. But in some ways, there is a very Christian concept underlying “Rocketman,” namely Elton’s redemption—even if it is from his own biography.

There is a very Christian concept underlying “Rocketman,” namely Elton’s redemption—even if it is from his own biography.

Destined to be one of the year’s big hits, “Rocketman” is a largely joyous affair. There is a benevolent tsunami of music tumbling off the screen, as the film gives life à la Busby Berkeley to the musical dreams of the young Reggie (the wonderful, choirboy-ish Matthew Illesley), the slightly older Reg (Kit Connor) and finally their adult incarnation—played by a terrific Taron Egerton, who brings an often uncannily John-like timbre to the dozens of songs that populate the soundtrack. He does something else with the music, too: I finally know the actual lyrics to songs I have been hearing for 40 years.

The movie’s framing device is a 12-step meeting—into which the cocaine-addicted, alcoholic, shop-a-holic, sex-a-holic Elton barges in wearing full demonic stage gear—from crimson jumpsuit to feather-boa wings to a headpiece with horns. The satanic theme is no accident, of course, Elton being a self-hating pain in the neck whose progressively flamboyant stage act (he looks at times like a cloisonné Christmas ornament) mirrors his increasing dependence on booze, drugs and the kind of relationships that make him want booze and drugs.

Reinvention is no easy feat, not when you have grown up a bespectacled, closeted middle-class Brit with a name like Reg Dwight.

He is a mess. He will, we know, get better. “What were you like as a child?” someone asks, and it is too much of a setup not to be a slight wink to the audience. Still, it serves its purpose: We are off into Elton’s past, among the grubby postwar English streets and the unhappy domicile where Mom (Dallas Bryce Howard) is coarse, Dad (Steven Mackintosh) is cold and his grandmother (Gemma Jones) is the one sympathetic soul in his whole young life.

She will be replaced, in a sense, by Bernie Taupin (Jamie Bell), the lyricist with whom a meeting is arranged by their mutual, hellish music manager Dick James (Stephen Graham, looking distractingly like Tennessee Williams). They meet for tea, bond over the song “Streets of Laredo” and form a partnership that is both lifelong and a lifeline for Elton during his more turbulent periods, which are various and sundry.

I finally know the actual lyrics to songs I have been hearing for 40 years.

This relationship is the soul of the film, and in many ways rescues it from being frivolous or overly formulaic. Elton, having accepted his homosexuality, makes an perfunctory pass at Bernie early on, but from then on they are a team, each knowing his role in the partnership and the partnership becoming something more. They are “brothers,” they say more than once, and of course the nadir of Elton’s upward-downward trajectory of self-destruction comes when he puts that bond in jeopardy.

Meanwhile…there is music, lots of it, with songs often shoehorned into narrative service. One of the things that becomes obvious about “Rocketman” is that for all its cinematic extravagance, it could very well have been on Broadway (where John has scored “The Lion King,” “Aida” and “Billy Elliot,” though the movie story ends before all that). It might yet be, given the path of these things. Like “Beautiful: The Carole King Musical,” or “Ain’t Too Proud to Beg” or “Jersey Boys,” the film is a jukebox musical, the story almost an excuse for the songs.

The more common comparison upon the release of “Rocketman” release will be to the Freddie Mercury biopic “Bohemian Rhapsody.” They have the same director, after all (Dexter Fletcher, who completed “Bohemian Rhapsody” after Bryan Singer was bid adieu), and foreshadow an endless stream of rock biopics. They also feature subjects who struggle (Elton less than Freddy) with their sexual orientation and with addictive substances, and whose descent into squalor is more than a little predictable. (Oddly enough, they both feature gay men who marry women and—gasp—make them unhappy.) Where “Rocketman” wins, though, is in its happy abdication of stark reality. The songs, the color, the dancing and, yes, the redemption are all intended to make people happy. And will.

Have you read the review (Not a Catholic one) that said that Rocketman is the first American movie to show gay mens' sex act on the screen? That's what I won't pay to see, although I love Elton John's music, and I love a redemption story.