New documentary, ‘The Francis Impact,’ looks beyond the pope to the people he serves 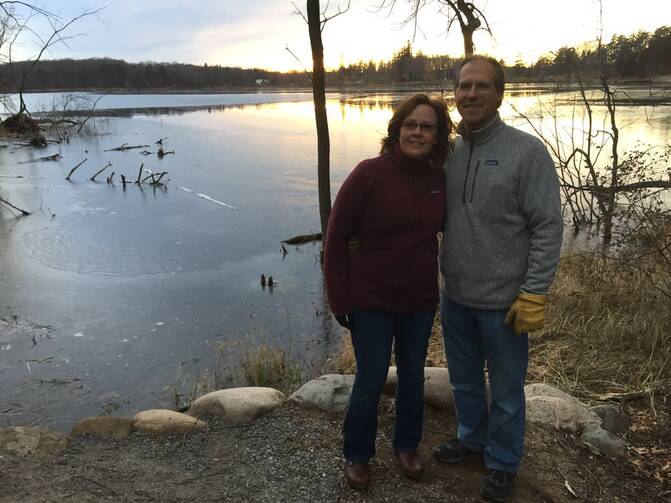 Lynn and Mark were married in 2016 after their annulment was approved thanks to reforms to the process initiated by Pope Francis. (photo: Salt & Light TV)

Even as a Catholic immersed in the life of the church, I rarely hear stories about the annulment process. Understandably, the church wants to respect the privacy of couples, but a lack of stories often leads to a lack of understanding. In “The Francis Impact,” a new documentary from Salt and Light Media, four stories show how Pope Francis has changed the church and the world. One of these stories is that of Mark Schwinghammer and Lynn Imholte, a couple from St. Cloud, Minn. They waited for a long annulment process to unfold, so they could marry in the church.

Lynn’s husband died in a car crash around the same time Mark’s wife initiated divorce proceedings. Mark and Lynn share their story with grace. They speak about their early relationship as one in which they consoled each other over coffee and conversation. Both were caring for teenage children. They did not move in together or marry in a civil ceremony, because they wanted to set a good example for their children.

The key was to shift the spotlight off of Francis onto ordinary people who have been impacted by him.

Lynn is a eucharistic minister who brings Communion to people in a hospital. She describes the Eucharist as a key part of her faith, something she wanted to be part of her wedding and her life. Both Mark and Lynn felt faith was important, both individually and to their relationship.

“She would come over for a Saturday morning coffee, and we would talk about the Bible study she was in,” Mark says in the film. “I thought that was a good trait and part of why I asked her to marry me.”

Pope Francis’ reform of the annulment process in 2015 and his call for a more pastoral approach to divorced Catholics, as expressed in “Amoris Laetitia,” allowed Mark and Lynn to marry in the church. Prior to Francis’ reforms, two diocesan tribunals had to approve an annulment request before a marriage was annulled. The couple waited more than three years as Mark’s annulment was denied two times, even when the annulment had the support and cooperation of his first wife.

Pope Francis has called for a more pastoral approach to divorced Catholics.

“The fact that the church was putting up roadblocks to these very good, holy, practicing people was very telling about why the process needed to be reformed,” said Sebastian Gomes, the director of “The Francis Impact.” Gomes heard about Mark and Lynn’s story through a mutual friend while at a reunion at St. John’s University in Minnesota. “There’s a lot of people who have gone through [an annulment], but it’s such a personal experience.... It’s tough to get people to talk about it,” he said.

After Pope Francis instituted reforms, a declaration from one tribunal became enough to approve an annulment. Mark’s annulment was approved shortly after the new rules took effect. He and Lynn had a Catholic wedding that their pastor described as “the best celebration of all” because “everyone there was faith-filled and committed like [Lynn and Mark] were.” Mark and Lynn share their story from a place of gratitude for Francis’ reforms.

The church was putting up roadblocks to these very good, holy, practicing people.

“It was the pace at which Francis was doing things that really drove us to say, ‘Yes, we need to do a second film,’” Gomes said of his team at Salt and Light. “The key was to shift the spotlight off of Francis...onto ordinary people around the world who have really been impacted by him and let them tell their story.”

It was the pace at which Francis was doing things that really drove us to say, ‘Yes, we need to do a second film.’

The film also features Catholic leaders in El Salvador—like Archbishop José Luis Escobar Alas—who joined environmental activists to save freshwater from metallic mining; the people of Lampedusa who were inspired by Pope Francis’ 2013 visit on behalf of migrants; and the interreligious friendship that formed between Cardinal Gérald Lacroix, the archbishop of Quebec, and Boufeldjah Benabdallah, the president of the Quebec Islamic Cultural Centre, after a mosque shooting in Quebec City.

Gomes said he wanted to “emphasize the universality of the impact” Pope Francis has made. “This is not isolated to a particular culture or country or continent,” he said.

“The Francis Impact” gave me a moment to pause and recognize that, while my church remains imperfect, Pope Francis has transformed the lives of many people.

Will you please ask Sebastian Gomes to explain "Mark’s annulment was denied two times" and then issued after the third attempt. Was Mark's first wife ever given the proper pastoral care when she filed for divorce against Mark? If she was cooperating with the annulment process, she seems to be likely to participate in other marriage canon law cases. With the non-profit organization, Mary's Advocates, I work to reduce unilateral no-fault divorce. I wonder if Mark was protected from the no-fault divorce practices by his local diocese? We publicize how the civil government judges do not have competence to decide Mark's obligations toward his first wife (annulled wife).

I don't find this story inspiring or Catholic. Jesus said that to divorce and remarry is adultery. Adulterers do not go to heaven. But Pope Francis doesn't believe in hell. So these people follow Francis to wherever, but they are not following Jesus.

Everyone knows that PF1 loosened the annulment process to make Catholic divorce easier. This is anti-Jesus and anti-Gospel. God Jesus Christ is completely clear in the Gospel against divorce and remarriage.

"Thechurch" granting these declarations of nullity is made up of the same corrupt minds and souls who either have done nothing about the homosexual influence in the church or who are part of it.

There is no sin involved in anything you want to do or don't want to do as in be faithful to your first spouse and make your children happy and secure by keeping one home for them.

A true story: My old Catholic college had a CFO of great power who was married and with 11 children by his one wife. He caught the eye of his personal secretary (or vice versa). He divorced his wife and "ran off" with this secretary. Everyone waited for the reaction of the "good" catholic school. There was nothing. As he knew people of great influence (his boss was, again the word, a powerful college president who was a Jesuit), the marriage was annulled! After years of marriage and 11 children, the church declared the marriage never happened! But not to worry as the new couple always made sure everyone knew of their devotion to the Blessed Sacrament.... What a load of malarkey as, you know, this is the honoring with lips while hearts are far away part. Catholic divorce only works if the parties involved have the money, status, or connections. Every catholic I've ever known who has had an annulment (4 and counting) has had connections, usually a relative who was a priest. Pathetic!! And absolutely NOTHING to do with Christ. But we certainly do not want to lose a good source of revenue, do we? So we'll cobble together a reason to allow divorce to become acceptable but we'll dress it in another name. This is yet another show of preferential treatment for-well placed friends of hierarchy.