HBO’s ‘Veep’ bows out in character, after years of watching reality catch up to it 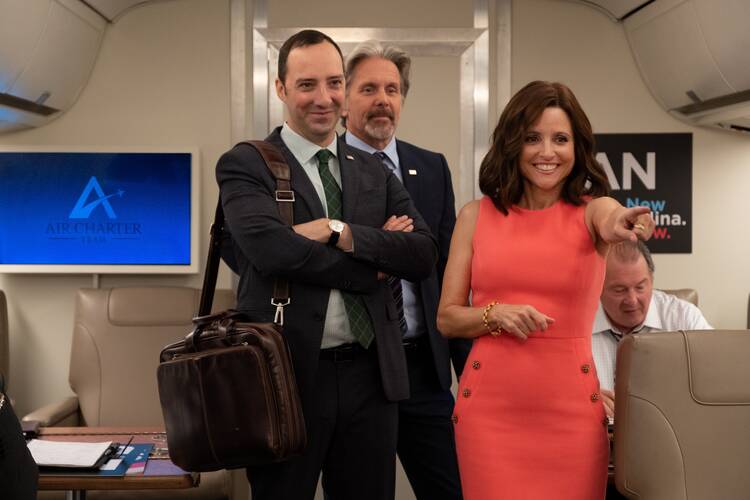 In April 2012, the most popular digital single in the United States was “We Are Young,” a dreamy pop anthem by the band Fun. (spelled with a period at the end). For a certain cohort of young people, the song represents a time when we were all a little more sanguine and hope shone a little brighter. “So let’s set the world on fire/ We can burn brighter than the sun,” many sang along, despite gridlock in Washington, income inequality, a bitter presidential contest and myriad other reasons to despair.

Fun. has been defunct for several years now. The band’s lead singer, Nate Ruess, released his first solo album on June 16, 2015, the same day that Donald Trump announced his candidacy for president. If Fun. was one side of the coin—the story we told ourselves about hope, change and justice—then “Veep,” which premiered on HBO in April 2012, was the other, a toxic valentine to D.C. sleaze.

The main characters of “Veep” (which aired its series finale on May 12) lied, schemed and scammed. Both callous and bumbling, they insulted each other and their constituents and sought power for power’s sake. They were also masters of crude language. “If you fear the de-electrification and eventual domestication of swear words, you may feel that ‘Veep’ takes us a little farther down that road,” wrote James Parker in his 2012 review of the show for The New York Times. Now it’s not unusual for our politicians to pepper their public remarks with expletives.

“Veep” was ahead of its time, and reality has finally caught up. In its final year the show was a little less fun and a lot more dread-inducing (but still mostly fun).

The seventh and final season tracks yet another campaign for the White House by former President Selina Meyer (Julia Louis-Dreyfus), whose party affiliation is cagily kept secret from “Veep” viewers. Jostling for votes, she and a sprawling field of candidates bounce between Iowa, South Carolina and New Hampshire. Her competitors include a stable of white men and a younger woman of color, a U.S. senator, who says in a primary debate, much to Selina’s consternation: “I have looked up to President Meyer since I was a little girl.”

There is also an election interference plot: the Chinese government conspires with the Meyer campaign to fix the primary. And a few episodes into the season, Amy Brookheimer, a Meyer aide, joins the presidential campaign of bloviating Congressman Jonah Ryan, morphing into a Kellyanne Conway-like propagandist.

More than a few times this season, I have been reminded of an essay from 1961, in which the novelist Philip Roth wrote that American life had become too absurd to satirize. In one passage, he discusses the envy he felt watching Richard Nixon debate John F. Kennedy:

Whatever else the television debates produced in me, I should like to point out, as a literary curiosity, that they also produced a type of professional envy. All the machinations over make-up, rebuttal time, all the business over whether Mr. Nixon should look at Mr. Kennedy when he replied, or should look away—all of it was so beside the point, so fantastic, so weird and astonishing, that I found myself beginning to wish I had invented it.

In some ways, “Veep” has fallen prey to this fifty-something prognosis. Sometimes it seems there is no escaping the hourglass of American life, that we are fated to sink deeper and deeper in sand, every grain another smidgen of crazy. What role is there for satire in this ecosystem?

While the Amy-as-Kellyanne and Chinese interference subplots come across as hackneyed, other plot points in the final season of “Veep” stick the landing.

Sometimes it seems there is no escaping the hourglass of American life, that we are fated to sink deeper and deeper in sand.  What role is there for satire in this political ecosystem?

Since the 2018 midterm election, for example, the generational divide between millennial politicians and party elders has seemed to grow more pronounced and a record number of women have declared presidential candidacies. On “Veep,” at a CNN primary debate in Iowa, sexism and cross-generational conflict meet in Selina’s new campaign slogan: “Man Up!” Annoyed with her opponent for invoking her identity as a “woman of color,” Selina goes off: “I smiled all through the casual grabbing of my behind and all the secret meetings on the golf course that I wasn’t invited to. So how about giving a little thanks to the women like me who built the ladder that you use to get up onto your soapbox? How about for once in your life you stop whining, you stop complaining and just man up?”

Post-debate, when Selina sees a significant polling jump, she exclaims, “God bless America for hating women almost as much as I do.”

The final season of “Veep” is also prescient. One plot line revolves around anti-vaxxers, the demagogic Jonah Ryan and a chicken pox outbreak. (While the show was airing this season, measles broke out across the U.S. in regions with high rates of nonmedical vaccination exemptions.)

I will remember “Veep” for the way it pulled off farce so well, conveying what I now believe to be true: No one, even (especially) the powerful, has any idea what they’re doing. Like when Interpol is on Selina’s tail and she has to hide out at (and later escape from) the Finnish embassy. In one of my favorite moments, from Season 1, then-Vice President Meyer is informed that the president has suffered a heart attack. Delighted by this news because it means she could ascend to the presidency, Selina wears her façade of gravitas like a giddy child playing make-believe. Then: “Madam Vice President, we’ve been asked to tell you that you may stand down. The president is fine.” (It was just a case of heartburn.) Hearing this, Selina deflates and, through gritted teeth, assures everyone how terrific the news is.

On ‘Game of Thrones,’ Jesus Christ is a girl on a dragon
Jim McDermott

‘The Death of Stalin’: Laughing in the face of evil
John Anderson

In 2019, it is easy to picture an elected official, or an enterprising aide, reacting the same way, bummed that the next person up the food chain didn’t kick the bucket. Preoccupied, self-interested. Childish and churlish and lost.

Yet the series finale is unexpectedly heartbreaking. Without giving away too much to viewers who have not yet caught up, it is a fitting coda to a show that was always about Pyrrhic victories and the hollowness of unbridled ambition.

As Roth wrote in his essay, in a sentiment that may have become increasingly resonant with “Veep” viewers over the years: “I began to wish that someone had invented it, and that it was not real and with us.”

It was definitely time for this show to end. It had become horrible people saying increasingly horrible things to each other. Also, the abortion arc was truly disgusting. It wasn't sarcasm but crudity and stereotypes. Like most shows, it went on a few seasons too long, devolving into a showcase for obscenities.

Perfect description of what happened to Veep! It was just vicious in the end, had no real point.

I like movies and TV shows that make HBO. The coolest thing they did is of course the Game of Thrones. I recognized actor from the first photo of this article; he starred in the new Chernobyl series, which released the HBO. I started watching this show and I really liked it. I remembered how we were taught in the school the Chernobyl tragedy in the USSR. I even bought an essay on this https://domymathhomework.org/coursework-writing/ page. If I could watch this show then, I would write a great essay.