On ‘Game of Thrones,’ Jesus Christ is a girl on a dragon 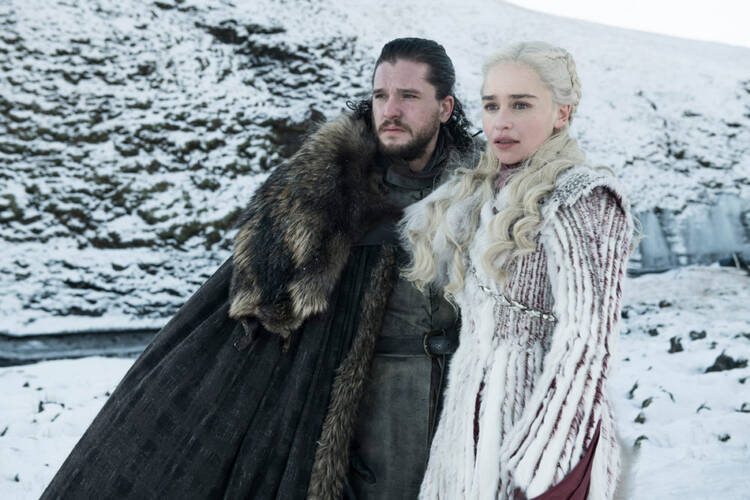 As night has gathered and we have prepared these last few weeks for our final watch of “Game of Thrones,” questions about the show’s ending have multiplied like Freys at a wedding. Will Jon Snow ever find out he and Daenerys Targaryen are related, and will that knowledge preclude the possibility of little wolf-dragon babies? Will Jon, Dany or Tyrion ever sit on the Iron Throne? Will someone finally (please) take down Cersei (please), and if so, will it be Sansa, Jamie or Arya “dressed” as Jamie? (Protect your face, Ser Jamie!)

Also, will humanity overcome the Night King and his forces, which include pretty much everyone who has ever died, and could this mean we’re also in store for some fun reunions? Headless Ned Stark might never be able to kiss Catelyn again, but think of all the people they could take out together. (Plus, maybe Night-Rickon will have learned how to zag.)

Who will live? Who will die? And will Missandei and Grey Worm, Sam and Gillie and Ghost and Nymeria get their happy-ever-afters?

Daenerys Targaryen embodies the element that makes the show so deeply compelling, namely, the quest to throw off the debilitating chains of social convention.

But as I have been rewatching the series over the last six weeks (and obsessing over marginalia, like author George R. R. Martin’s massive prequel history of the Targaryens, Fire and Blood, and his marvelous prequel short stories, The Knight of the Seven Kingdoms; I may be slightly excited), the bigger question I’ve wrestled with is what is it down deep about this show that has so totally captivated people’s imaginations. Yes, the show is blessed with an incredibly rich collection of characters, many of them underdogs and all of them struggling to survive in a world filled with bonkers plot twists that leave no one safe. It also has blockbuster movie-quality action sequences, including the Westerosi version of “Saving Private Ryan” and a zombie army siege in Season 5 that read like one long bravura rap-battle diss of everything “The Walking Dead” has attempted to be over the last 10 years.

Cable news tends to cast “Thrones” as some kind of interpretive key for understanding real-world political shake-ups. But that is an analogy that rarely makes any sense, as the current administration has neither the brilliantly conniving political nous of a Littlefinger nor the implacability of a Cersei Lannister. It is “Thrones”-like only to the extent that it seems to revel porcine-like in the worst qualities of King Joffrey and Robert Baratheon.

But what has most struck me is the degree to which every character on “Thrones” is imprisoned within social conventions. Jon Snow goes to the Wall as a teenager to live the rest of his life in the Westerosi version of a religious order (celibacy but with swords) not because he wants that life but because as a child born out of wedlock he feels he has no real place in his family. Tyrion Lannister, though he is actually maybe the most decent character in the series, is repeatedly accused of having done the very worst things—and those claims are usually accepted—simply because he is a dwarf. Samwell Tarly rescues a woman and her baby from murderers (repeatedly), kills two of the most dangerous creatures alive and risks his life to save a man from an impossibly dangerous disease, but he is also fat, so even the brothers sworn to stand with him feel justified in beating him and trying to rape the girl he is protecting.

Every character on “Thrones” is imprisoned within social conventions.

And all of that pales next to the experience of women in the series, who whether low-born or high are all eventually chattel to be used and traded by men for their own entertainment or power plays, while the bodies of the actresses playing them have also been regularly traded for ratings by the show’s male co-creators. (Considered as a whole, both the amount of female nudity demanded of the cast and the violence done to girls and women over the course of the series has been appalling. In the last half of Season 5 alone, a girl was burned at the stake by her father, her screams one of the most terrible sounds I have ever heard on television; another girl was raped by the husband she was convinced by another man was safe; three others were beaten by a man who is choosing who he is going to rape; and a woman was forced to walk naked through the streets of King’s Landing while crowds mock her and throw excrement at her. The creators let the scene play out for over seven minutes.)

For all but the most recent season of the series, Daenerys Targaryen, First of Her Name, Khaleesi of the Great Grass Sea and Mother of Dragons, has lived on an entirely different continent than everyone else. Season after season, viewers have wondered not only when Khaleesi is coming to take Westeros but why is her story so disconnected from everyone else’s. While everyone else plots and schemes (and dies), Daenerys has been...freeing foreign slaves? What?

And yet as we begin these last six episodes, it seems to me Daenerys’s work actually embodies the heart of “Game of Thrones” and the element that makes the show so deeply compelling, namely, the quest to throw off the debilitating chains of social convention and sometimes family in favor of a freedom to choose one’s path and identity for oneself. We all wonder who will ultimately sit on the Iron Throne, but Dany has already rejected that way of thinking. “Lannister, Targaryen, Baratheon, Stark, Tyrell,” she says in a scene at the heart of the series, “they’re all spokes on a wheel. This one’s on top then that one’s on top, and on and on it spins, crushing those on the ground.”

“It’s a beautiful dream,” Tyrion tells her, “stopping the wheel. You’re not the first person who’s ever dreamt it.”

“I’m not going to stop the wheel,” she replies. “I’m going to break the wheel.”

One of the great insights of the Catholic Church in the 20th century was that Jesus came to liberate people, that if you look at the entirety of the actions of his lifetime, not just the cross but everything he did, from having dinner with sinners, spending time with women, foreigners and others deemed unclean, exorcising the possessed and healing the sick, the one thing they have in common is the desire to set people free—from sin, of course, but also from prejudice and social marginalization. We all have a place at the table of the Lord, and anyone or anything that would say otherwise is not to be trusted.

That is not to say the path of life is easy. Whether you are a teenager trying to sort through your affections, a young adult struggling to discern what to do with your life, a parent or spouse trying to balance responsibilities and dreams, an elderly person that finds themselves often ignored or a Catholic trying to be faithful to the Gospel amid startling revelations of abuse and cover-up, being true to yourself, indeed becoming yourself, is often harrowing.

And yet, in the end, asks “Game of Thrones,” what else is there? The looming threat of the Night King is the reality we all face. Day by day, death is coming for each of us. Standing before that ultimate truth, will we spend the brief time we are given shackled to other people’s demands, or will we fight for ourselves and one another?

The table is set. A feast awaits. Let’s just hope it is not a wedding.

One time I had a free HBO weekend on my satellite provider. I tuned into a GoT episode. One recently castrated fellow was chained up and being cruelly taunted by another fellow. Once I got the gist of what was going on, it was "OK, that's it, I am out of here".

My guess as to inspiration is between the world view which gave rise to what we in the west call Hinduism or the Norse mythology of Ragnarök.
Two recurring themes in fantasy/science fiction since my childhood.

I haven't seen Game of Thrones, but I love your analysis and your ending question: Will we spend the brief time we are given shackled to other people’s demands, or will we fight for ourselves and one another?

I'm a fan of the books, but I am not a fan of the show. Martin's books is an intricate web of human psychology and political maneuvering. The show is just cheap shocks. Filled with gratuitous sex that don't advance the story.

Personally I see nothing Christ like with the character of Danerys Targaryen. Especially the show version. The show version comes across as nothing but a spoilt angry woman. The character in the book appears to be loosely based on Queen Elizabeth I. The whole plot of her 'freeing the slaves' was actually based on the George W. Bush's invasion of Iraq.

The sacrifice Jesus made was to save us from our sins. He died so that those of us who believe in Him and follow His commands can be given a new life by the infusion of the Holy Spirit. He was never a conquering hero in the military sense (at least in His first coming) that is why the analogy of Daenerys being Christ like is wrong.

the element that makes the show so deeply compelling, namely, the quest to throw off the debilitating chains of social convention and sometimes family in favor of a freedom to choose one’s path and identity for oneself