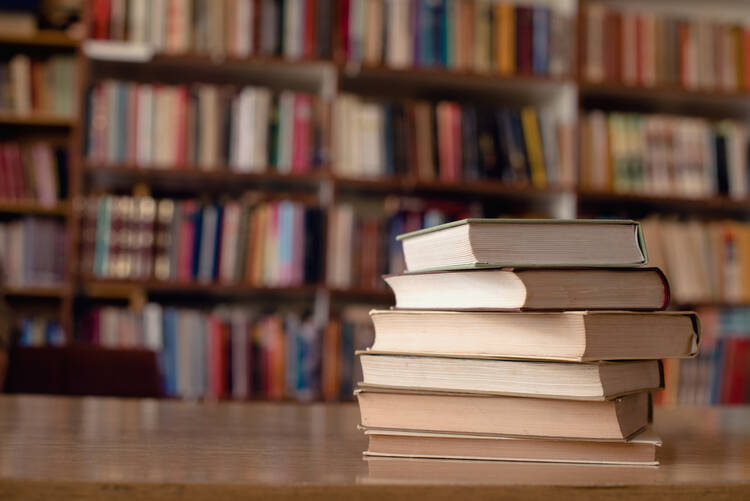 One of our goals in the Catholic Book Club (whose online community is now more than 2,000 members strong!) is to offer a variety of genres and literary styles, in part because we have found America readers have diverse tastes and in part because of the interesting and often startling ways the different types of books intersect with one another. In the two years since the Catholic Book Club began its Facebook discussion community, we have read novels, memoirs, theological treatises, historical biographies and short story collections.

Each genre and author selected has spurred detailed and sometimes passionate discussion, and our two most recent selections were no exception. In late fall we discussed Kate Bowler’s poignant memoir about being diagnosed with Stage 4 cancer, Everything Happens for a Reason: And Other Lies I’ve Loved. We followed that with one of three recent volumes of the collected short stories of Andre Dubus, The Winter Father. As always, we benefited in both cases from the intellectual and theological insights of our moderator, Kevin Spinale, S.J., who wrote an interpretive essay to introduce each book to the readers, along with questions for discussion.

Because my friend Father Spinale remains a bit of a Luddite when it comes to digital media and what he still calls “the face book,” I was grateful and surprised when he jumped into the discussion of both books online. And there is no doubt all of our fellow readers profited from his close and careful readings of both texts.

Each genre and author selected for the Catholic Book Club has spurred detailed and sometimes passionate discussion, and our two most recent selections were no exception.

Everything Happens for a Reason: And Other Lies I’ve Loved

“Theodicy is a fancy theological term,” wrote Father Spinale in his introduction to Kate Bowler’s memoir. “It is the name of the branch of philosophy and theology that puzzles over—agonizes over—the relationship between God and evil.” The puzzle, he writes, is what to make of the dichotomy between a God who is all-good, all-knowing and all-powerful, and the reality that concrete, massive global suffering exists? It provokes a baldly honest response:

How do we reconcile these two realities—one a principle of belief, the other a fact of personal and communal human experience—with one another? Or can we? It is a question that has haunted me—a Catholic, a believer—all of my life.

Bowler, herself a theologian and a professor at Duke Divinity School, came face to face with theodicy in 2015, when she was diagnosed with Stage 4 colon cancer. She was 35 years old, married, with a two-year-old son. She soon found that she was not the only one who struggled to make sense of what was happening. Her book title comes from the well-meaning phrase that so many people said to her, as she encountered many well-wishers who sought to “minimize the experience of suffering and death as either a gateway to heaven or an inconsequential cessation of life that marks a blink in the vast, cold reality of the universe.”

The great balm for Bowler in her suffering, Spinale writes, is the weight of the presence of others as they accompany her: the weight of her two-year-old son; the weight of her husband’s arm around her; the weight of bear hugs from friends; the weight of her father’s hand as he strokes her hair before she goes into surgery. And, quite simply, the weight of feeling accompanied and loved: “It seemed too odd and too simplistic to say what I knew to be true,” Bowler writes, “that when I was sure I was going to die, I didn’t feel angry. I felt loved.”

Many readers connected with Bowler’s musings on mortality, and of course it came as a shock and sometimes just a welcome recognition when we discovered just how many of us have had to face the cruel reality of cancer—either ourselves or in communion with our loved ones. “When my father was diagnosed, he was gone in a couple of weeks,” wrote Mary T. Keating. “But to those of you in remission, or who are still taking treatment, does the experience of having the dire diagnosis not come to pass make you believe that prayers worked?” She notes that Kate Bowler takes each additional two months as a major gift, more than she thought she could have with her family: “She wishes for a long life, and prays for it, but knows better than most that each morning is precious, and in that way her prayers are answered.”

The reader Emily Hanlon noted she had once read a description of how to answer the problem of theodicy: “In the Final Judgment, all our actions and their consequences will be known, and their ultimate meaning within the context of God’s saving work throughout the ages will be revealed to all.” She adds that “while I recognize that no one really knows what the Final Judgment is, it gave me great solace to think that I would finally understand the great pattern—or, in other words, the reason everything happened.”

"While I recognize that no one really knows what the Final Judgment is, it gave me great solace to think that I would finally understand the great pattern—or, in other words, the reason everything happened."

When the writings of Andre Dubus were collected and reissued in a three-volume set by David R. Godine last year, his stories seemed a natural fit for the Catholic Book Club. “Dubus was an irascible, loyal, loving, smoking, hard-drinking, hard-punching, tender man, who demanded much of himself and others and, according to at least one friend, did not realize how much,” wrote Franklin Freeman in a review for America. “He was also a devout Catholic, attended daily Mass whenever possible and had a profound devotion to the Eucharist and the reality of the sacraments, both the official church sacraments and the sacraments of daily life.” With that in mind, our selection team eagerly chose The Winter Father, Volume II of the set, for our next book.

What followed was an adjustment. As readers—myself among them—delved deeper into Dubus’s stories, we were startled by the graphic language, the occasional misogyny and the emotional cruelty of many of the characters in Dubus’s tales. And yet there remained a strange beauty to his prose. “The stories of The Winter Father are human stories—filled with ugliness and moments of grace,” Father Spinale wrote. “The energy packed into Dubus’s stories throbs with Old Testament clarity: expulsion, loneliness, the ferocity of parental love, adultery, retribution and sex that is a stay against loneliness.”

Even the violence noted by many readers seemed always to have a thematic etiology in Dubus’s writing: “Expulsion from a family, from a home, from a marriage spurs sadness, anger, resentment and hate in the heart of the expelled. Loneliness inspires haphazard relationships,” Father Spinale wrote. “And expulsion coupled with the pain of loneliness combusts into violence.”

Some readers noted that the connection to rituals that some Dubus characters have might have been a stay against the despair many of his characters encounter. “On some level, I think their secular rituals served as an anchor grounding them,” noted Irene Lucas. “Sorrow, loss, disappointment, and more can sometimes feel like one is drowning in a great void. The rhythm of their routines gave them something to hold on to so the void could not swallow them.”

Others noted the gritty reality that Dubus brought to every character. “If we are made in the image and likeness of God, crisis seems to be what it takes to fully activate the implied powers of love and creativity,” noted the reader Elizabeth Malone. “Dubus’s stories take us to a world where outcomes went the other way, as, in fact, they often do in real life.”

To offer the broadest possible range of quality books with spiritual and intellectual heft, we are always interested in suggestions for what we might choose next. Are you interested in reading and discussing with us? Join the Catholic Book Club at americamagazine.org/catholic-book-club or on Facebook at facebook.com/groups/americacbc/.