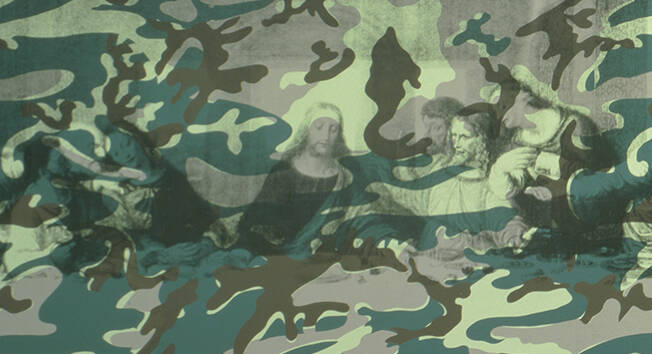 “Andy Warhol: From A to B and Back Again,” now on view at the Whitney Museum of American Art, begins and ends with nearly identical, gargantuan canvases covered in a green camouflage pattern.

Exiting the elevator and entering the exhibition space, you are immediately confronted by “Camouflage” (1986). At nine feet tall and 35 feet wide, the scale of this painting is monumental. The camouflage pattern is all-encompassing. There is nothing to hold your attention, just a seemingly endless void of green-and-brown. It is a pattern we ordinarily wouldn’t think twice about: ugly, flat, uninteresting, overused and utilitarian, associated with the military and G.I. Joe dolls, not high art. But here, at the entrance of a landmark retrospective for one of the biggest names in the history of American art, it serves as an opening curtain, inviting us to wonder: Behind the camouflage of celebrity, who was the real Andy Warhol?

Behind the camouflage of celebrity, who was the real Andy Warhol?

As we make our way through the exhibition we see the various iterations of Warhol’s ever-changing identity. His celebrity is kaleidoscopic, effortlessly transitioning into different manifestations of itself. In one room with early work from the 1950s, he is a whimsical illustrator creating commercial art for the advertising world. In another, filled with images of Brillo boxes, Campbell’s Soup cans, dollar bills and Coke bottles, Warhol is a poetic aesthete, finding beauty in everyday objects—or, perhaps, he is the curmudgeon of capitalism carefully criticizing consumerism. A large space features heavily saturated flower paintings hanging on walls covered from floor to ceiling with pink-and-yellow, cow-themed wallpaper. Here he is the king of camp, a gay icon embracing the “it’s so bad, it’s good” aesthetic.

After moving through the crowded, overwhelming panache of Warhol’s life’s work, we reach the exhibition’s final space: a large, airy gallery with four oversized canvases. The room is somehow meditative, a stark contrast to the spectacle of earlier spaces. Two vertical paintings from 1984, both titled “Rorschach,” take their inspiration from the famous test of the same name. These enormous acrylic blots on canvas beg us to look for answers: Who was Warhol? Does he reveal himself to us in his paintings?

In the same room, a 25-foot green canvas begins to reveal the imagery lost in the exhibition’s opener. “Camouflage Last Supper,” also from 1986, repeats the same military pattern, yet this time fading in and out of transparency. A diptych of da Vinci’s “Last Supper” peeks out underneath, mirroring the symmetry of the “Rorschach” paintings. Are the curators telling us something here? Is this image of Christ at the Last Supper the key to understanding Warhol?

Maybe the celebrity in a silver wig was really just a man—a grown-up version of the Byzantine Catholic boy, raised by immigrants in Pittsburgh, Pa. A congregant who, as an adult, attended Mass almost daily at St. Vincent Ferrer on Lexington Avenue. A gay Catholic living in a homophobic world and working in an irreligious art world. Can we find that Warhol in the commotion of his catalog?

Maybe the celebrity in a silver wig was really just a man—a grown-up version of the Byzantine Catholic boy, raised by immigrants.

Retracing my steps through the exhibition I am struck by a pairing of two portfolios of four screenprints each titled “Sunset” from 1972. Simple and striking, they offer a rare natural sublimity amidst a crowd of kitsch. The sun, a circle, fades into the water, which blends into the sky. Each one is different, the colors ranging from cool purples to warm yellows, every one as effective as the next. Here, Warhol captures the simple beauty of a sunset over water on paper again and again and again.

On the wall plate, the curators tell us that the prints are from a series of 632, all of them unique. The series was commissioned by an architect wanting an original work for each room in a hotel. They are likely adapted from “Sunset,” a 33-minute unfinished film of the sun setting in real time. Warhol created it for collectors who had commissioned “a work of spiritual significance” in 1967.

Can we find spiritual significance in the “Sunset” prints? The circular forms boldly standing against the saturated shades of color remind me of communion wafers—the perfect little circles of unleavened bread that through transubstantiation become the Eucharist. I think of Warhol in the back of a church on Lexington Avenue watching a priest hold up a circle of bread, his finger blocking just the very bottom portion of it. I think of him watching this mystical, miraculous moment in awe of the sublime. Of him sitting in the pew, watching this again and again and again. But I also think of all the Catholics like myself who are asked why—amid the sexual abuse crisis, amid the homophobia and sexism built into the structures of the institutional church—they stay, and respond with a simple unwavering faith in the Eucharist. For me, Warhol’s sun is the son, and it is beautiful.

Every time I read the fact that Warhol attended Mass quite frequently, I am reminded that Christ’s Church is first of all a place of welcome, comfort, and peace for all people, the good, the bad, the celebrities, the humble, and most of all, the word that best describes all of us, the sinners. Like it did for Warhol, it does for all of us, it motivates us to behave as something that we want to be, believers. Won’t the self-righteous be shocked to see Warhol decorating the canvas of Heaven!

15 minutes of fame, Catholic for life :)

Quite a few of Catholicism greatest artist were gay, Michelangelo, Da Vinci, we are enriched to this day by their works. Warhol knew that, he painted not with the belief of immortality but with the belief that his talent was God given for which he was thankful. We should enjoy his works.

Quite a few of Catholicism greatest artist were gay, Michelangelo, Da Vinci, we are enriched to this day by their works. Warhol knew that, he painted not with the belief of immortality but with the belief that his talent was God given for which he was thankful. We should enjoy his works.

I really enjoyed this - I remember when I spent some time in South Bend at Notre Dame and was so amazed at how many people you would expect to be at Mass were. Great piece