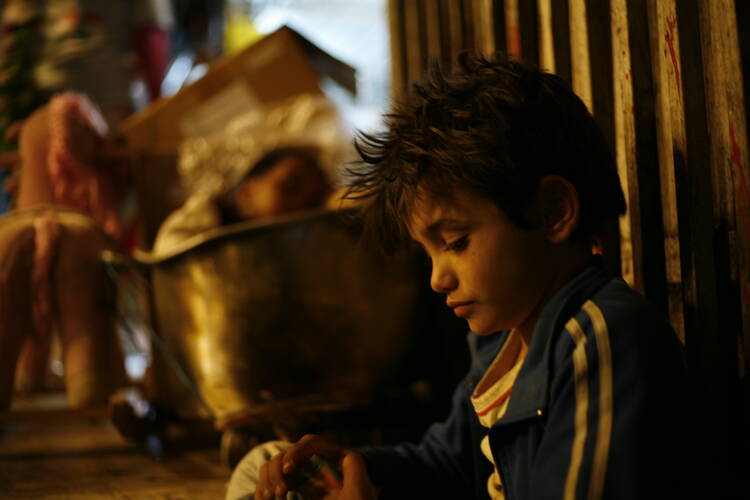 Poverty is the uncredited lead character—or, perhaps, a much-indicted co-conspirator—in “Capernaum,” one of the year’s more remarkable movies and one with many ancestors: the Italian neo-realism of De Sica and Rossellini, the faux-vérité of Abbas Kiarostami and possibly even Carl Dreyer’s “Joan of Arc”—the human face being the film’s most eloquent device, amid the supreme chaos (or “capernaum”) of current-day Beirut.

The dominant face belongs to Zain (Zain al Rafeea), a tough, savvy street kid whom we first meet as he is being examined by a police physician. Zain looks like a first-grader; the doctor says he is 12. It is the first of many appalling details that flow like a river of recriminations throughout “Capernaum,” which is bookended by Zain’s court case. He has been accused of stabbing someone. Who? The likely candidates multiply as the story unfolds. Meanwhile, Zain has his own complaint to file: He wants to sue his useless parents. Why? For having allowed him to been born.

Nadine Labaki’s new film is set amid the supreme chaos of current-day Beirut.

Viewers are thereby hooked, and the Lebanese director Nadine Labaki keeps them that way throughout a picaresque journey through the streets and hovels and storefronts and sordid domestic dramas that provide her film’s physiology. With little exception, the movie is told in flashback and portrays Zain’s hardscrabble existence among unloving parents, his most beloved sister, Sahar (Cedra Izam), and the rest of his seven siblings who sleep in one bed. He is casually mistreated and exploited by his mother, Souad (Kawthar al Haddad), and father, Selim (Fadi Kamel Youssef), whom Zain fears will try to sell Sahar to the skeevy convenience store owner who is lusting after her.

“I’ll bet my right arm you’re trading three chickens for Sahar,” he says and has to sidestep a beating. But he isn’t wrong.

The poor will always be with us, Jesus said, but they will also always be victims.

Labaki, who has come a long way from the slightly soapy movie “Caramel” of 2007, has cast her film with what are usually called “non-actors” but who are nevertheless peerless here as conveyers of charity amid misery, nobility amid squalor. They also, apparently, have back stories as agonizing as those of the characters they play, including Yordanos Shiferaw, who plays Rahil, the Ethiopian immigrant whose permit has expired and who constantly fears deportation as she cares for—and hides—her 18-month-old, Yonas (Boluwatife Treasure Bankole). Shifraw herself was a displaced person, and in “Capernaum” she plays one scrambling to find the money for a counterfeit ID from the predatory document forger who also wants to traffic her son. She will do anything, and when she gets arrested for it, it falls to Zain to care for Yonas, dragging a kid who is half his stunted size around a city that, fortunately for a fugitive, clearly does not care.

Money may be the root of all evil, but lack of it is the lifeblood of predatory criminality and bureaucratic indifference. The poor will always be with us, Jesus said, but they will also always be victims, as Labaki and her film make clear, generating drama high and low and even an occasional bit of dark humor: Zain, in one of his more desperate moments, tries to pass himself off as a Syrian refugee, so a relief organization will give him milk and food for Yonas. It’s a wry moment butr hardly the only one in “Capernaum.”