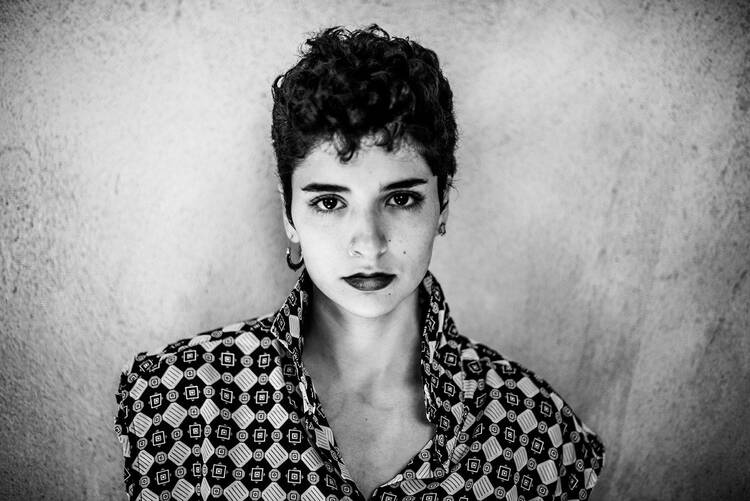 When she is on stage, Rasha Nahas’s wiry frame splays like a bird on the cusp of take off, her swoop of curls falling forward. “Myself, I am a desert torn,” the 22-year-old singer-songwriter declares, accompanied by her electric guitar. “I was born on a mountain by the sea.” Ms. Nahas is performing solo to a cross-legged audience in Berlin at a Sofar Sounds event, which hosts surprise performances in secret venues across the world featuring artists as varied as The National, The Orchestra of Syrian Musicians and the rising Wisconsinite rapper Trapo.

A Palestinian artist living and performing in Berlin, Ms. Nahas is from the Mediterranean city of Haifa, where she was trained as a classical guitarist before venturing into rock. Hailed by The Guardian as having the “theatricality of Weimar cabaret with added violins and rockabilly,” Ms. Nahas is now in the process of making her first album, which she is co-producing and crowdfunding with help from Palestinian and European fans.

Although she still writes in Arabic, her native tongue, Ms. Nahas’s upcoming album is in English. This is partly because she wants a wider audience to hear her music and also because she says that is how the songs come to her. “I am not assuming that everyone speaks English,” she said, “but I want people who are not only Arabic speakers to have access to my music.” Ms. Nahas has gained a following in Europe since turning her attention to English—last year, she made her debut on the British festival circuit, performing on one of the stages at the 135,000-strong Glastonbury festival, in addition to the hippier (and smaller) Shambala and Greenbelt festivals.

But Ms. Nahas first found an audience with a stirring original song in Arabic, “Meen Bint Sgheeri” (“Who’s a Little Girl”), which she performed for a YouTube series called “Indigenous Sessions,” a project highlighting local Palestinian musicians. In the video, a fresh-faced Ms. Nahas showcases her classical guitar techniques (she never uses a guitar pick, even when playing the electric guitar). “Meen Bint Sgheeri” has a rolling, liquid quality that comes naturally to Arabic, with Ms. Nahas singing run-on lines punctuated by the guitar. “This is a funny way to say it,” Ms. Nahas said, but in Arabic “sometimes the words roll on the rhythm. In English they’re square, and in Arabic they’re more round.”

Ms. Nahas’s sound has sharpened as a result of writing and performing in English, and it has also affected her lyric composition. “In Arabic there are hundreds and thousands of ways to say you love somebody,” Ms. Nahas said, referring not only to the vast vocabularies of Arabic but also the various different dialects and the difference between spoken and written Arabic. By contrast, in English “it’s hard to describe emotions without sounding like a hundred other different songs.”

“In Arabic there are hundreds and thousands of ways to say you love somebody.”

In the past two years, Ms. Nahas’s sound has taken a further twist. It is experimental, a little weird or “rude” as Ms. Nahas said. “The Fall,” a song released last year, could not be further from “Meen Bint Sgheeri”—Ms. Nahas’s voice has grown, and she has greater control of it in the glissando-filled song.

Ms. Nahas’s newly assembled band—which includes a cellist, a violinist and a drummer—are helping her bring to life what she broadly calls rock songs, steered by electric guitar and backed by string arrangements. Ms. Nahas plans for her album to include protest songs, love ballads and character-driven narratives. The violinist Shaden Nahra, who went to school with Ms. Nahas and plays in her band, described the latest songs as “theatrical poetic rock, filled with howling violins.”

“With the European audience, I’m somehow bringing something very familiar, in terms of like a band onstage playing rock and roll,” Ms. Nahas said. “But it is very much influenced by who I am, and the story I bring with me being a woman in exile, being a Palestinian artist born in Haifa.” Ms. Nahas describes her exile as chosen, because she decided to leave Haifa for Berlin so she could advance her music career and she can return home.

Bruce Springsteen experienced mental health issues. That should enrich your appreciation of him.
Eloise Blondiau

She is currently performing in France in “Sodassi,” a musical collaboration between six artists, Palestinian, Egyptian and Lebanese, facilitated by Kamilya Jubran and featuring the celebrated Egyptian singer Dina El Wedidi. This collaboration, which seeks to explore identity, musical heritage and genre, would be more difficult to organize in their home countries, where there are various travel restrictions despite their proximity.

Nov. 30: This article was updated with a clarification regarding the nature of Ms. Nahas' exile.

Eloise Blondiau is a producer at America. She is a graduate of Harvard Divinity School.