Review: The next generation of Palestinian women has a different kind of story to tell 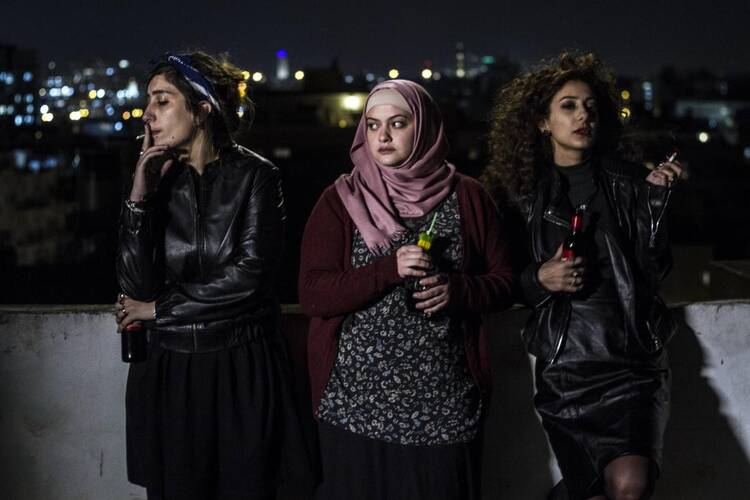 Mouna Hawa, Sana Jammelieh, and Shaden Kanboura in “In Between.” (Credit: Yaniv Berman)

For filmgoers depressed by films from Israel and Palestine concentrating on stabbings, terrorism, arrests, family feuds and the Holocaust, “In Between” offers a change of place and point-of-view. The young Palestinian writer and director Maysaloun Hamoud, who grew up in a village in northern Israel, with degrees from the University of Jerusalem and the Minshar School of Art in Tel Aviv, grabs us and pulls us down into the Palestinian nightlife of Tel Aviv. She presents it as, in many ways, typical scenes across the Arab world, where those who were teenagers during the second intifada—a Palestinian uprising against Israel in 2000—are coming into their own with a lifestyle that defies the values of the previous generation.

For filmgoers depressed by films from Israel and Palestine, “In Between” offers a change of place and point-of-view.

In an interview, Ms. Hamoud calls this cohort the “Palestinian avant-garde.” These are young people who grew up on classic Arab poetry but will bring forth their own poetry, music and films. “An Arab New Wave has begun to emerge,” she says.

Now, her generation can turn its eyes to Tunisia, Lebanon and Jordan and share in the desire for freedom and liberation. Her contribution to this rising moment is the story of three very different young women, roommates, who must grab freedom from the men in their lives or be stymied by the previous generation.

Lalia (Mouna Hawa) with a head of wild curly hair, is a sharp-witted criminal lawyer who loves to make the rounds of the Tel Aviv dance clubs, constantly smoking and passing joints to her companions. Her roommate is Salma (Sana Jammelieh), a D.J. and bartender from a Christian family in northern Galilee, whose identity as a lesbian strikes one of the film’s major chords. Homosexuality, in the judgment of the director, is one of the main issues that previous generations in the Middle East have refused to face, other than to suppress. Nur (Shaden Kanboura) is a younger, more modest, religious Muslim who moves in with these two to be near the university.

The young Palestinian writer and director Maysaloun Hamoud grabs us and pulls us down into the Palestinian nightlife of Tel Aviv.

Despite all their differences, these three young women get along well, sharing the household duties, introducing one another to various families and friends. Meanwhile, young men move in and out of their lives sharing cigarettes and dinners. Our eyes are on Nur—an innocent and sensitive young woman, scarf wrapped around her head and shoulders. She is typical of her age group: constantly stimulated and challenged by the changing culture that she has been raised to ward off.

The men in the story may be seen as characteristic of many Palestinian men or, in that good art represents universal values, the men we meet in the U.S. and European worlds of law, entertainment and business. They are take-charge types who insist that the female objects of their attention do what they say. (Warning: Spoilers ahead.)

When Nur’s conservative fiancée arrives he is appalled by the secular lifestyle of the other two women; they are “impure,” he says. As the plot thickens, he insists that Nur agree to marry him now and move away to live with him. But she is captivated by this new urban lifestyle and realizes she does not love him. They are alone in her bedroom; he moves to pin her down. She resists. In the film’s most brutal scene, he rapes her. When Lalia and Salma come home they find Nur on the bathroom floor and gently bathe her in the shower.

Review: A Christian town faces its sins in post-war Hungary in “1945”
Raymond A. Schroth, S.J.

‘Faces Places’ may be the quintessential French road movie
Raymond A. Schroth, S.J.

Meanwhile, Salma’s Christian father discovers her lesbian identity. Losing all control, he screams at her and hits her in the head, sending her sprawling.

Finally, the three young women take Nur’s attacker for a car ride, in which they park and in ominous tones order him to go to Nur’s father to withdraw from the marital commitment. The attacker leaves, and the father lovingly embraces his daughter.

The director-writer Ms. Hamoud has achieved her goal of bringing “more Palestinian female representations to Palestine cinematography.” There are enough horror stories in the daily headlines to illustrate that women are still beaten and abused. I cannot help regretting that the women in the story were not politically involved. Israel and Palestine could use their talents.