Is your job necessary? 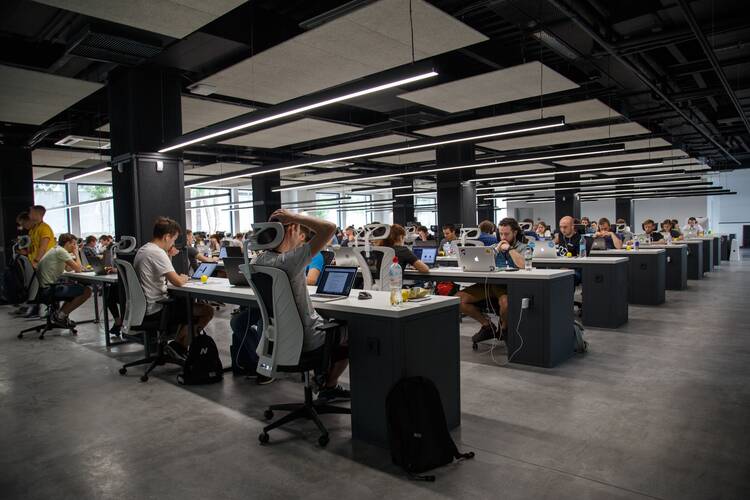 Americans work an awful lot. But what are we doing at the jobs we believe are so important? For some workers, it is obvious. They’re collecting your trash. Or they’re teaching your kid the Pythagorean theorem. Or drawing a vial of your blood. They’re doing stuff that needs to get done.

What about the rest of us? What are the branding consultants doing? Or the accreditors? What about the value-based health care associates and the clearing member representatives—both of which are open positions advertised on LinkedIn as I write this? Do the people who have these jobs even know what they’re doing? Would anyone notice if they just stopped doing them?

David Graeber doesn’t think so. Graeber, an anthropologist and the author of the rollicking mega-narrative Debt: The First 5,000 Years, guesses that about half the jobs in advanced economies are pointless, and the workers know it but feel they need to pretend they’re doing something useful. They’re doing “bulls**t jobs.”

People with useless jobs include flunkies (who make higher-ups feel important), goons (the lawyers and P.R. flacks who battle counterparts at other companies), duct tapers (who fix systemic problems through ad hoc means), box tickers (who signal, often to regulators, that work is being done, even when it’s not) and taskmasters (who assign useless work to other people). None of these roles answers a real human need. The work is symbolic and ideological, not useful. Graeber’s point, in calling out useless jobs, isn’t to put these workers out on the street in the name of corporate efficiency, though. It’s to liberate them.

David Graeber guesses that about half the jobs in advanced economies are pointless.

On Graeber’s account, the proportion of useless jobs in the economy—and of useless tasks within otherwise productive jobs—has grown in recent decades. Even jobs that unquestionably do something valuable feature useless “box-ticking rituals.” As Graeber writes, “one ends up spending so much more time pitching, assessing, monitoring, and arguing about what one does than one spends actually doing it.” He has a point. According to one study, physicians spend half their workday doing data entry, and only about a quarter on direct patient care.

How did this happen in the era of the supposedly lean and mean corporation? According to Graeber, we devalued work once we began to believe that capital, not labor, creates all wealth. We’ve built a system of “managerial feudalism” in which the worker’s time belongs to the boss, regardless of whether that time is productive.

Bullshit Jobs: A Theory (Simon & Schuster. 333p $27) began as—and is haunted by—a viral essay Graeber wrote for Strike! Magazine in 2013. It is reprinted in the book’s introduction, and Graeber frequently refers back to its argument and responds to its critics. He quotes a paragraph from it as the epigraph to his final chapter. He also draws the bulk of his ethnographic data—email messages quoted at length—from people who read the essay and wrote to him with accounts of their own useless jobs. Because of this methodological limitation, the book works best, true to its subtitle, on the level of theory, as a vocabulary for talking about why office workers so often feel like they’re wasting their time and talent.

The most obsessive U.S. work culture may be in the technology sector.

The most obsessive U.S. work culture may be in the technology sector, where every startup promises to remake our world. Tech workers board Wi-Fi-enabled buses in San Francisco and start working immediately as they rumble down the peninsula to Silicon Valley. As the journalist Corey Pein found in reporting for his fun, jaundiced book Live Work Work Work Die: A Journey Into the Savage Heart of Silicon Valley (Metropolitan Books. 309p $28), the loftiness of the techies’ rhetoric is a thin mask for the fact that what they’re doing is often useless too. That is, when it isn’t predatory.

Pein, a frequent contributor to The Baffler, spent months living in dodgy, expensive housing in the Bay Area to understand how Silicon Valley works—and what it’s doing to the rest of us. Because none of the young workers Pein meets can afford to buy their own meals or know how to cook, they socialize at catered events at tech companies’ offices. At these parties, people ask Pein, “What’s your space?” To a normal person, the question would be, “What kind of work do you do?” But these workers don’t want to think of themselves as workers.

“They could only face themselves in the mirror,” Pein writes, “if their business card proved that they were rock stars or ninjas or something romantic and brave and individualistic—anything but the truth, anything but a drone.” The reality of most coding work, however, is that it is drudgery. “The most important computer commands for the ninja to master were Copy and Paste,” Pein writes.

The proliferation of useless jobs may signal that faith in the moral value of work is ebbing away.

A lot of what tech companies do is break up other people’s satisfying, decently paid work and offer it to the lowest bidder. Uber allows anyone to be a cabdriver; Spotify lets you be your own D.J. and record-store clerk. With Yelp, you get to be a restaurant critic. The key innovation has to do with labor, not technology. By creating ever more freelancers, these companies do, in a sense, cut out considerable useless work. But at the same time, “Most of the startups pitched as ‘Uber for X’ boiled down to ‘cheaper labor for X,’” Pein writes.

Pein thinks the whole tech industry is a scam, concentrating wealth in a few hands while destroying value nationwide. Traditional media is collapsing, for instance, yet online advertisers aren’t even getting what they pay for. The eyeballs that view web-based ads might be automated software, or else they’re humans working in “click farms” on the other side of the world, earning a penny per click.

Pein compares Silicon Valley today to the California Gold Rush of the 1840s and ’50s. In those days, most prospectors went bust. The smart investment was to capitalize on their foolish hopes: “Sell shovels to all the suckers who think they’ll get rich digging for gold.” Pein sees landlords who operate what amount to Airbnb tenements as shovel merchants. Likewise conferences where developers with half-baked ideas pay to pitch to bored venture capitalists.

If the technology sector is a grift, then it’s hardly alone. A decade ago, the “innovations” of subprime lending and collateralized debt obligations ruined our economy. Now the wellness industry hawks charcoal and coffee enemas as cures to made-up afflictions.

The contradiction in the U.S. regarding work is that the same society that believes you need to labor for wages in order to have dignity also believes in getting rich quick. The proliferation of useless jobs may signal that faith in the moral value of work is ebbing away. That’s not necessarily a problem. After all, work isn’t really what gives human beings dignity. But some people still believe in work, and they’re at risk of exploitation by those whose only creed is acquisition. The challenge of social ethics is to elevate the former and rein in the latter. New York City recently passed an ordinance that limits Uber’s activity on the streets and mandates a minimum wage for its drivers. It’s a start.

This article also appeared in print, under the headline “Idle Hands,” in the Fall Literary Review 2018, issue.