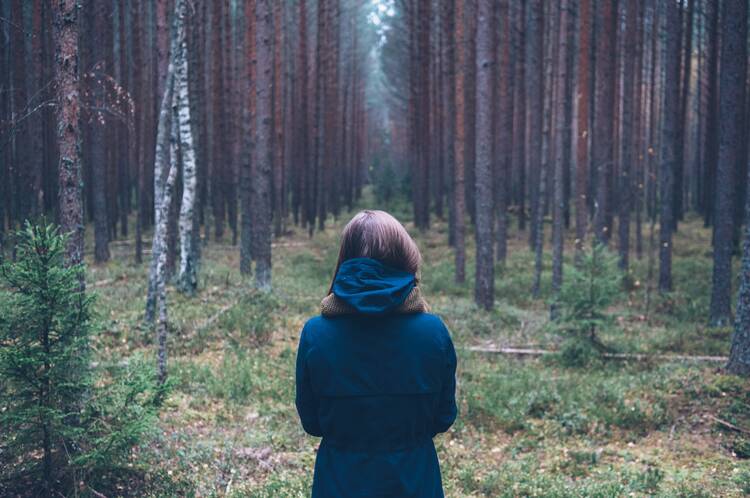 Photo by Jordan Sanchez on Unsplash

The popular Catholic hymn “Be Not Afraid” has been included in the hymnals of every Christian denomination, but people might be more likely to sing it in a time of fear or grief than at church.

An informal Twitter survey of America readers returned story after story—some of them embedded in this article—of people singing the hymn to comfort dying relatives or when facing intimidating transitions in life.

That’s exactly why the song exists: Bob Dufford, S.J., started writing “Be Not Afraid” when he was, well, afraid.

It was 1972, and Dufford was not a “Father” yet. He was on a Jesuit retreat, preparing to be ordained and grappling with anxiety about his future: Where would he go? What sort of work would he do as a priest? Would he be any good at it?

Bob Dufford, S.J., started writing “Be Not Afraid” when he was, well, afraid.

His spiritual director suggested that he pray with the Annunciation in mind. Perhaps he could relate to Mary, who was “greatly troubled” when the angel appeared to her and said she would give birth to the Messiah. Dufford read the passage, and the angel’s words stuck with him: “Do not be afraid.”

The line “Be Not Afraid” came to Father Dufford on that retreat, with the same melody it has today.

As a hospice chaplain, I sang this song to many people as they neared death. I sang it through my tears to my own mother on her deathbed in 2013. Thank you. Susan C. Mitchell, BCC-ret ( Catholic board certified chaplain, retired.)

A few weeks later, a friend, Medical Mission Sister Therese Connolly, told Father Dufford she would be leaving to do missionary work in Ghana. Hoping to finish the song before she left, he started reflecting on the end of Matthew’s Gospel, when Jesus says “I am with you always.” That inspired a second line, “I go before you always,” but he would not finish the song for another year.

“Come, follow me,” came from another Father Dufford song. He sang a bit of it in a phone interview with America: “It was ‘Come, follow me, I will make you fishers of men,’ and I knew that was not going anywhere. It was a dumb melody, but I had the ‘Come, follow me.’ I kinda liked that part.” So he added it to his new song, and wrapped up the chorus with “And I will give you rest.”

After the chorus was done, Father Dufford was ordained. He directed a retreat of his own. Finally, in autumn 1973, the verses came to him, fully formed.

After the chorus was done, Father Dufford was ordained.

The next spring Father Dufford played the song at a liturgical music workshop that his friend, fellow Jesuit songwriter John Foley (composer of “One Bread, One Body” and several other popular folk-inspired hymns), attended.

“Foley came to me and said, ‘You know, Duff, I think this is going to be a really important song.’ I said, ‘Yeah, right,’” Dufford recalled. “[“Be Not Afraid’] always seemed like an ugly duckling…. I cobbled it together.”

How to get more people to sing at Mass: Stop adding new hymns
John Zupez, S.J.

But Father Foley also told his friend to make the verses flow more like spoken words. Rather than “You shall cross the des-ert,” he said, it should be “You shall cross the bar-ren des-ert.” Accents at awkward junctures, Foley warned, could distract someone praying with the song.

“No way, I did not want to hear that,” Father Dufford said. “It took me 15 months to get the friggin’ thing done!” But, grudgingly, he fixed the verses and sent the song to a publisher.

The song was published and distributed in 1975, and Father Dufford doesn’t remember an immediate response, but eventually he started receiving letters. One woman wrote to him about her husband who was an alcoholic. The family would pray a Rosary for him every day and sing “Be Not Afraid,” and the man finally joined Alcoholics Anonymous. Another woman, an Anabaptist, heard the song at her husband’s funeral and said it carried her through her grief.

As a cantor I always loved the song. But it became personal as we were trying to grow our family (we adopted our daughter in 2014 after years of sorrow, hope, and waiting). I found myself humming it at night to fall asleep. Still do sometimes.

“These stories come back and I go, ‘Oh,’” Father Dufford said, with a hint of awe in his voice. “It’s just amazing. It’s a privilege to have been a part of making it.”

In 1993, President Bill Clinton chose “Be Not Afraid” to be played at the church service he attended on the morning of his inauguration. The former president wrote in his autobiography that the song was “one of my favorite hymns and a good lesson for the day.” Father Dufford remembers watching the service on television with the Jesuit who had told him to pray with the Annunciation all those years before. Father Dufford turned to him and said, “Who’d a thunk that this would happen, that we’d both be sitting here years later, after this song’s been out, it’s been around the world, translated into several different languages?”

Sister Helen Prejean, who is known for her work to end the death penalty, often sang “Be Not Afraid” to inmates on death row.

The most humbling moment for Father Dufford came when he learned that Sister Helen Prejean, who is known for her work to end the death penalty, often sang “Be Not Afraid” to inmates on death row. (Sister Prejean is portrayed by Susan Sarandon in the 1995 movie “Dead Man Walking” and sings “Be Not Afraid”—”If you stand before the gates of Hell and death is at your side, know that I am with you through it all”—in one of the film’s most moving scenes.)

“It’s the last thing that some of these guys hear,” Father Dufford said. “I was just—wow. What do you say to that?”

But Father Dufford said he was puzzled at first when people wrote to him to say that “Be Not Afraid” had comforted their dying loved ones, or themselves when they were mourning.

“For me, it was a song of transition,” he said. “There was a fear, but it was a fear of going from one place to another in the [Jesuits], ending one thing and starting another. I didn’t know what was going to come, and I had this sense of the promise of God: ‘I go before you always.’”

“For me, it was a song of transition,” he said. “There was a fear, but it was a fear of going from one place to another in the [Jesuits].”

As he grew older, Father Dufford began to understand that growing old and dying is a transition: “That’s the big one,” he said.

He began working with a group of aging religious sisters in Oshkosh, Wis., whom he had guided through the Spiritual Exercises. Many of them had led active lives in ministry and were now struggling with what Father Dufford called “the diminishment of aging and letting go.”

This was my daily mantra in the time leading up to and just after the death of my mom and then, 5 yrs later, my dad. I'd sing it in the shower as the tears flowed, in the car on my way to & from work, and then at nite to try to sleep. Most important 8 words in my life at the time

After his father died, Father Dufford sought to put words to what his father and the sisters had gone through, so he added a new verse to “Be Not Afraid”:

And when the earth has turned beneath you and your voice is seldom heard,
When the flood of gifts that blessed your life has long since ebbed away,
When your mind is thick and hope is thin and dark is all around,
I will stand beside you till the dawn.

“That’s what I saw in my dad at the time, and I see some of that in myself now, too,” Father Dufford said.

“When these [songs] come back and start preaching to me, touching my heart, that’s when I’ve arrived,” Father Dufford said. “[“Be Not Afraid”] is now coming back and comforting me, as it did when my father died.”

Read America’s previous articles on the origins of Catholic hymns: “Here I Am, Lord” and “On Eagle’s Wings.”

Colleen Dulle is a Joseph A. O'Hare, S.J., Postgraduate Fellow at America.

One of my personal favorites it does bring comfort. As a cantor, it is also one of my favorites to sing.

Mine too. I love playing it at home on my baritone horn, emphasizing those great sixteenth notes. I've made a copy of the new lyrics that I have inserted into the outdated church hymnal I have, for singing purposes. What a hymn indeed.

Where can I purchase a download of the song with the new verse?

I am afraid that the Catholic Church will remain patriarchal for a long time, which for me is an insufferable purgatory.

So what unique gifts do women have to bring to the church? Knowing this will eventually open the door for women. I agree that being excluded is painful, but carping is counterproductive.

As I was reading this article, the expression, "Faith is something that is caught, Not taught" came to me. When our faith is expressed in any art form that captures all of our senses, it is much more powerful than simply the written or spoken word. Combining truth and beauty speaks to the depths of our souls and the most distant recesses of or hearts.

I love this song! It is nice to hear the story of how it was written. Thank you!