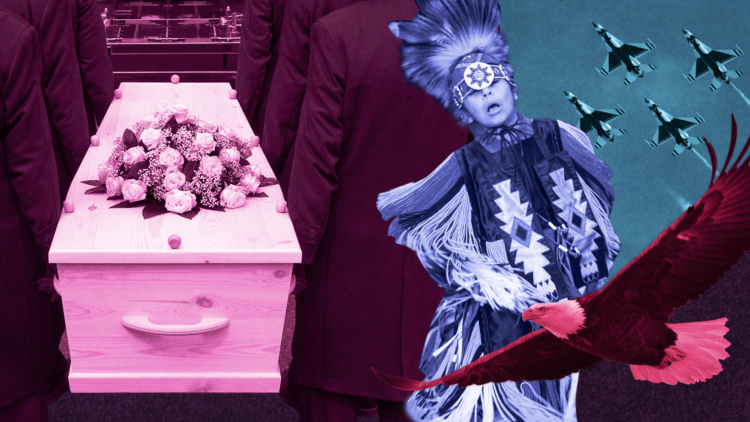 Editor's Note 11/7/2020: President-elect Joseph R. Biden quoted "On Eagle's Wings" during his first speech as president-elect. Father Michael Joncas, the hymn's composer, told America: "To quote the President-elect, 'I was honored and humbled' to hear him quote 'On Eagle’s Wings' as he set out his initial vision for the country. I pray that the song can serve in some way to help the healing of our nation."

While Catholics can argue ceaselessly over a number of issues, we hold a few unshakable truths in common: Jesus is present in the Eucharist, Mary was conceived without sin and, when “On Eagle’s Wings” plays, we cry.

I’ve always liked the song but find it hard to sing it while I’m crying: And hold you in the palm of my hand. I’m crying now.

In the 38 years since its publication, “On Eagle’s Wings” has achieved global popularity, been translated into a variety of languages and become a Christian funeral classic (if not a staple).

But the song’s true staying power is rooted in our shared but individual experience of hearing it in moments of grief.

Also played at my grandma’s funeral....

Composer Jan Michael Joncas wrote the song after he and a friend, Doug Hall, returned from a meal to learn that Hall’s father had died of a heart attack.

Father Joncas doesn’t recall if he ever met Hall’s father, but he remembers wanting somehow to console his friend.

“I knew this was a hard, hard experience in anybody’s life, [and I] just wanted to create something that would be both prayerful and then comforting,” Father Joncas told America in a Skype interview.

In the days preceding Hall’s father’s wake, Father Joncas returned to his parents’ house in Minnesota and composed the song on his guitar, sketching out a melody line and accompanying chords. The now-famous hymn debuted at the wake.

“I just wanted to create something that would be both prayerful and then comforting,” Father Joncas said.

Father Joncas kept the song under wraps for some time after that—he was wary of liturgical music publishing following an earlier negative experience. “On Eagle’s Wings” joined a group of compositions he held onto for several years before submitting them to the St. Louis Jesuits’ publisher, North American Liturgy Resources, who then offered Father Joncas an album deal.

“I think they had already tagged ‘On Eagle’s Wings’ as the [song] that was going to have the most legs,” Father Joncas said.

He didn’t pay much attention to the hymn after that, but he became aware that the song was gaining popularity outside Catholic circles when his publisher forwarded him requests from other denominations to reproduce the song.

Then, following the 1995 bombing of the Federal Building in Oklahoma City, Cathy Keating, the governor’s wife, requested that “On Eagle’s Wings” be played at a memorial for those killed.

Father Joncas recalled thinking, “Wow, this was way beyond even denominational stuff. This is becoming part of the culture.”

Two years later, Michael Crawford, who originated the role of “The Phantom of the Opera” on Broadway, sang “On Eagle’s Wings” on national television, surprising Father Joncas again with how far his song had reached.

But the crowning moment came when Father Joncas tuned into a broadcast of the funeral of one of his heroes: the famed operatic tenor Luciano Pavarotti.

“Suddenly the soprano [stood] up from the parish choir and…[sang] ‘Sulle Braccia dell’Aquila,’—‘On the Arms of the Eagle’.... It was now in Italian,” Father Joncas remembers. He recalls thinking to himself: “They’re singing ‘Eagle’s Wings’ at Pavarotti’s funeral. Wow.”

The whole experience was rather surreal for Father Joncas, who thinks of “On Eagle’s Wings” as a callow effort. He draws a parallel between “On Eagle’s Wings” and Ravel’s “Boléro:” it’s not his best work, but he doesn’t mind it being his most popular composition.

“I think I’ve written deeper and better pieces, but this one, for whatever reason, touched people’s hearts, and I’m not gonna yell about that,” Father Joncas said.

“I think I’ve written deeper and better pieces, but this one, for whatever reason, touched people’s hearts, and I’m not gonna yell about that.”

He has been overwhelmed by the wide-ranging positive reception of the hymn, especially in unexpected places: The song has become a sort of signature selection at the U.S. Air Force Academy’s Cadet Chapel, as well as in Native American communities where the eagle holds an important place in the spiritualities of several tribes.

“The number of times people have come up and talked about the song touching them at really tough moments—I am pretty much just blown away by the experience that God can still use that [song] 35 years, 40 years after its creation and still have it impact people’s lives,” Father Joncas said. “But I don’t think it’s me. I really think it’s the fact that it’s Scripture, that the melody then allows this incredibly important scriptural text to hit the heart in a way that it wouldn’t, maybe, if you were just reading it.”

Scripture is at the center of Father Joncas’s creative process, even as his musical style ranges widely, from his popular folk-inspired “I Have Loved You” (1977) to a breathtaking “Salve Regina” canon for double choir (2008).

He cites among his musical influences the Gregorian chant and polyphony he heard as an altar server, his classical background—his mother was a lyric soprano and he was trained in 20th-century piano technique—and the folk music revival of his young adult years.

“You know, one of my heroes was Joni Mitchell,” Father Joncas said with a characteristic rosy-cheeked grin. “She was once quoted as saying…[that] it’s really hard being a musician or composer because, like, nobody ever said to Van Gogh, ‘Paint a “Starry Night” again, man!’”