In Bangui, Pope Francis Seeks to Create the Conditions for Peace in the Central African Republic. 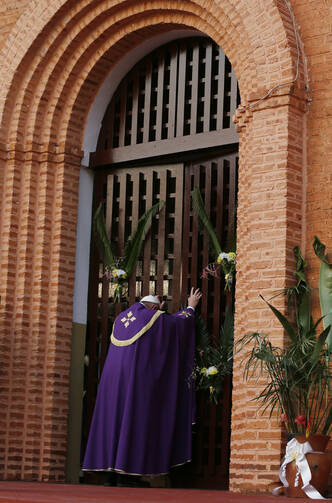 Pope Francis put peace and reconciliation in the Central African Republic at the center of international attention by his visit here, Nov. 29 -30, during which he sought to create the conditions for this by, among other things, opening the Jubilee Year of Mercy in Bangui’s cathedral and appealing to those engaged in the two-year old conflict to “lay down the instruments of death."

He did other things too that, in the views of many Central Africans, have contributed to the dynamic for peace. First, he met leaders of the country’s Evangelical Churches when he visited their Theological Faculty in Bangui and there he gave support and encouragement to their efforts, in collaboration with the Catholic Church and with an Imam from the city’s Muslim community, to work together for reconciliation and peace. In this context it should be recalled that 63 percent of the population of the CAR are Christian, 15 percent are Muslim.

Significantly, the Evangelical Church leaders and the Imam were also present in the cathedral when Francis opened the Holy Door and the Jubilee Year of Mercy and celebrated Mass. And when it came to the moment for the kiss of peace, Francis went and exchanged it with them. Moreover, tomorrow morning (Nov. 30), Francis will visit the Central Mosque of the city’s beleaguered Muslim community as a sign of solidarity and friendship with them and as a message to all the citizens of the CAR that Christians and Muslims can live together in peace.

His push for peace and reconciliation did not stop with these actions; he went further by speaking to thousands of young people at a prayer vigil outside the cathedral after Mass. This event was particularly significant given that the average age of the 4.5 million citizens of this country is just over 19 years. At that meeting, Francis urged them to engage in “resistance” to the evils in society, to never hate anyone, to not flee the country, to pardon those who have done them wrong, to try to love one’s enemies, to fight for peace each day and above all else to pray a lot to God “who is greater than all else” and who, in fact, “has the last word.”

In addition to all this, Francis visited one of the 40 refugee camps in this city where some 3,700 people live, mostly women and children. (There are almost 500,000 internally displaced persons in this country, while some 400,000 have migrated to neighboring states).

All those living in the refugee camp that he visited had been displaced from the homes as a result of the two-year-old conflict, and when they met him many shouted “security, security” because they are afraid of being killed if they were to leave the camp. He encouraged them not to give into fear and reminded them that “we are all brothers and sisters.” He told them “we must all work for peace” and reminded them too that “peace is not possible without friendship, forgiveness, unity and love.” He assured them that he was on their side in this work and concluded by wishing them “peace, a great peace,” in which people may live together in harmony irrespective of their ethnic origin, culture, religion or social status. His visit encouraged them greatly, and like so many other people in this city of 1.5 million people, they were deeply grateful for his visit and by the fact that he had shown determination and courage by coming here, despite the opposition and rumors of threats.

I was present when Pope Francis met the leaders of the Evangelical Churches and at his encounter with the young. I was also present at the cathedral when he opened the Holy Door and the Jubilee Year of Mercy and was in the cathedral at mass when he delivered his powerful homily, which was applauded at key passages relating to peace in this land.

Each of these events were truly impressive and clearly had a very positive impact on those involved, if one is to judge by the immediate reactions of the participants. I believe, however, that his opening of the Holy Door and Jubilee Year at the cathedral in Bangui and his challenging homily at Mass are the ones that could have the biggest impact on this country’s Catholic community (which counts for 37.3 percent of the population) and therefore also in the search for and building of peace in this land.

One could say many things about the deep significance of the opening of the Holy Door and Jubilee Year of Mercy in the cathedral of Bangui, I will just mention a few.

By opening the Holy Door and Jubilee in the cathedral, Francis broke with a centuries-old tradition, and for a very good reason—peace and reconciliation in a country in conflict and deep trouble. In doing so, he put the "periphery" at the center of the church’s attention, brought this destructive and deadly conflict to a new level of international concern and gave a whole new dimension to the Jubilee of Mercy.

Francis himself had this to say about opening the Jubilee Year in Bangui. “Today, Bangui becomes the spiritual capital of the world. And the Holy Year of Mercy arrives before time in this land that has suffered for several years from war, hate, incomprehension, and the lack of peace.” Speaking spontaneously before opening the Holy Door, Francis said that “in this suffering land there are all the countries in the world that are suffering the cross of war.” And so, he said, “Bangui becomes the spiritual capital of prayer for the mercy of the Father. We all ask for peace, mercy, reconciliation, pardon and love for Bangui, for the Central African Republic and for all the countries that are suffering war. We ask peace for them all.” He concluded by inviting all present “to pray for love and peace in this land, and let us begin the Holy Year with this prayer.”

Later in an important paragraph in his powerful homily, Francis recalled that “it is amid unprecedented  devastation that Jesus wishes to show his great power, his incomparable glory and the  power of that love which stops at nothing, even before the falling of the heavens, the conflagration of the  world or the tumult of the seas. God is stronger than all else.” These words produced strong applause both from those in the cathedral and the thousands of young people in the area in front of the church.

When the applause died down, Francis told those present in the cathedral and the vastly greater number following the ceremony by radio or television that the “conviction” that "God is stronger than all else" gives to the believer “serenity, courage and the strength to persevere in good amid the greatest hardships. Even when the  powers of Hell are unleashed, Christians must rise to the summons, their heads held high and be ready to  brave blows in this battle over which God will have the last word. And that word will be love!” These words sparked even more enthusiastic applause.

But the greatest applause of all, and the ululating of women came when Francis, speaking with passion and force addressed directly all those who are continuing the conflict, and said:

“To all those who make unjust use of the weapons of this world, I make this appeal: lay down these  instruments of death! Arm yourselves instead with righteousness, with love and mercy, the authentic  guarantors of peace.”

Later than evening, speaking at a press briefing in Bangui at the end of this memorable day, Mgr. Nestor-Desire’ Nongo-Aziagbia, bishop of Bossangoa, expressed immense gratitude to Pope Francis for his courageous visit. He said he believes it can create the conditions for peace and propel the peace process and added that it has also given important support to those religious leaders in the Christian churches and in Muslim communities who want to end the conflict and build a future of peace for all the inhabitants of this land.

Pope Francis, for his part, concludes his visit in Bangui tomorrow morning, Nov. 30, by going to the central mosque of the Muslim community and meeting five Imams there. Afterwards, he will celebrate mass in the Barthelemy Boganda Sports Stadium and then take the plane back to Rome after an extraordinarily successful visit to the heart of Africa.