Following Francis in Sri Lanka, the Philippines: On-the-ground coverage of the papal trip 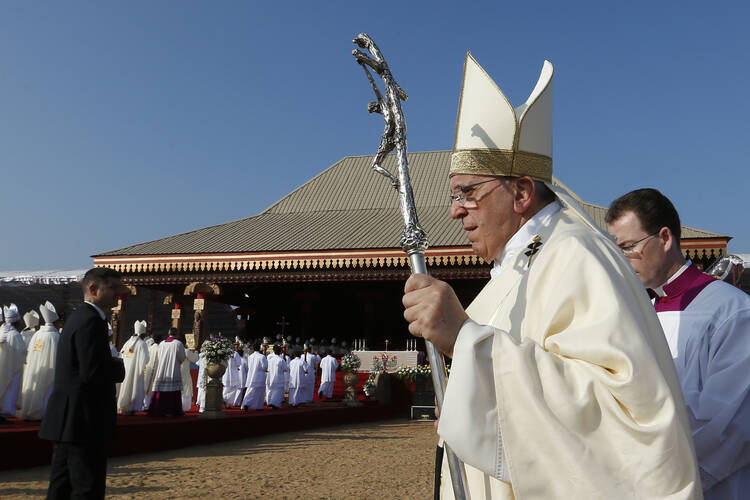 Pope Francis will make his second trip to Asia, with stops in Sri Lanka and the Philippines, from Jan.12 to 19. Gerard O'Connell, America's Rome correspondent, is accompanying the pope and will provide ongoing coverage and analysis. O'Connell writes that "mercy and compassion" is the logo of the visit to the Philippines, "a reminder that he is coming primarily to comfort survivors and relatives of the victims of Typhoon Haiyan and the 4 million Filipinos it left homeless in 2013." Read the rest of his preview of the papal trip in "Francis Returns to Asia" in our Jan 19-26 issue. Follow America and Gerard O'Connell on Twitter for live coverage, and check in with our Facebook and Dispatches blog for regular updates.

Pope Comforts the Survivors of the Typhoon telling them, ‘You are not alone, Jesus never lets you down,’ Gerard O'Connell (Jan. 17)

Millions Turn Out in Manila to Cheer ‘The Pope of the Poor,’ Gerard O'Connell (Jan. 16)

Full text in English of the Pope’s Press Conference on Flight from Colombo to Manila, Gerard O'Connell (Jan. 15)

Pope, at Shrine at Madhu, Prays for Reconciliation and Rebuilding of the Unity that Was Lost, Gerard O'Connell (Jan. 14)

Pope: ‘Put Reconciliation Among All Sri Lankans at the Heart of Every Effort to Renew Society,' Gerard O'Connell (Jan. 13)

Pope in Sri Lanka Calls for Reconciliation and Healing After the War, Gerard O'Connell (Jan. 13)

Pope Francis Sets Out for Sri Lanka and the Philippines, Gerard O'Connell (Jan. 12)

Hopes and Concerns in Sri Lanka on the Eve of Pope Francis’ Visit, Gerard O'Connell (Jan. 10)

A Pilgrimage to Madhu, Mathew N. Schmalz offers a personal look at Sri Lanka's holiest shrine and one of the places Pope Francis will visit. Photo gallery also available.