What can we learn from wolves? 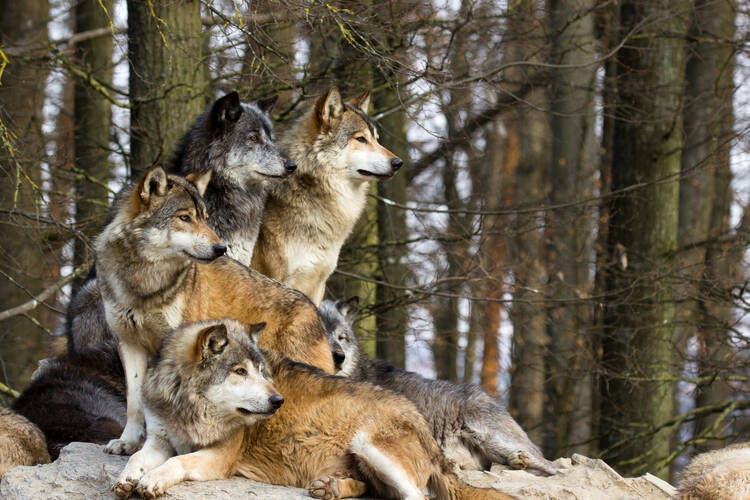 Homo homini lupus. “Man is a wolf to man.” Over 2000 years ago, the Romans coined the phrase that perhaps best explains humankind’s ambivalent mix of fear, animosity and admiration toward wolves. Variations of the “humans are like wolves” or “wolves are like humans” narrative have proliferated ever since, from German U-boat commanders who embraced the name “wolf pack” for themselves to that fantastically implausible fairy tale where a grandmother and a wolf prove difficult to tell apart. It is hard to think of any other animal that has quite the same cultural impact, particularly if one considers that dogs are essentially domesticated wolves. Something about our connection with wolves continuously draws us back to our fascination with them.

The Wisdom of Wolvesby Jim Dutcher and Jamie Dutcher

The latest entry into this 2,000-year canon of observation on human-wolf similarities is Jim and Jamie Dutcher’s The Wisdom of Wolves. The Dutchers spent 6 years living alongside wolves in a 25-acre enclosure in Idaho. Originally built for a documentary, the enclosure allowed the Dutchers to get closer to wolves they were recording than even some of the most experienced wolf researchers. Their new book is an account of how, in close proximity, the Dutchers got to know a pack of wolves as individuals.

Something about our connection with wolves continuously draws us back to our fascination with them.

For those seeking an introduction to the wolf, to individual wolves and to humanity’s similarities with wolves, this readable book is a worthy first dip in the pool. It is the interlupine dynamics of the “Sawtooth Pack” that make the better part of the book. The politics around wolves, their protection and their continued existence are fraught, especially in the western United States. Jim and Jamie Dutcher allude to that reality, but are not overly concerned in their book with the complexities of the wolf as a political problem. As the founders of the “Living with Wolves” project, they have clearly chosen a side in the sometimes bitter fights over wolf reintroduction. Instead, the book reflects the Dutchers’ fascination with the wolves themselves. How do they live? How do they hunt? How do they interact with humanity and with each other? How do they love? Who are they as people—oops, as wolves?

Baked into the book’s ever-present editorial perspective and stated outright in the title is the belief that humans really have much to learn from wolf behavior and personality. At times when reading of the hurt feelings among wolves that result from the power dynamics of the pack, one can forget that one is reading about wild animals and not high school students. Yet the Dutchers largely reject the tired use of the wolf as a metaphor for humanity’s violent, aggressive and hierarchical tendencies. Instead the comparison is largely positive, and aspirational for the human reader. Wolves take care of their young, and even within their strict hierarchical social order seem innately to understand the responsibilities the strong have to the weak, the full to the hungry and the young to the old.

It must be mentioned that the Dutchers’ unique enclosure method means their groundbreaking observations and interactions with the Sawtooth pack do not occur in the true wild. As such, as moving and rewarding as it is to get to know individual wolves, the price is perhaps a more accurate picture of how wolves truly live far from human eyes. Stricter scientists may not be pleased, and the Dutchers’ initial goal in living among the wolves was not strict research but rather the creation of what became a critically-acclaimed documentary. The wolves were likelier safer with the Dutchers than in the wild. By enclosing the wolves, the Dutchers largely removed the possibility of conflict with other animals, including humans, and most interestingly with other wolf packs.

By enclosing the wolves, the Dutchers largely removed the possibility of conflict with other animals, including humans, and most interestingly with other wolf packs.

Yes, there are thought-provoking comparisons to humanity apparent in the Dutchers’ intimate detailing of how wolves relate to each other as friends and family. But some of the more disturbing elements of human nature also find themselves reflected in wolf behavior, such as wolf packs’ violent confrontations with one another over mates and territory. The more violent aspects of wolves are played down in the Dutchers’ work, which shines above all else with a love and respect for wolves. The Dutchers’ words leave no doubt: they see wolves as examples for human behavior, and that is the case that their book makes. The Wisdom of Wolves prompts reflection on the fact that we are also little more than animals, but instead of despairing at that conclusion, it asks us to take comfort in our animality. Of course, the lives of wolves (and of the humans who lived with them for 6 years) are not presented as comfortable. Nature is not supposed to be comfortable.

Humans and wolves: Are we more alike than we think?
Antonio De Loera-Brust

How homelessness, climate change and the California fires are all connected
Jim McDermott

Our lives weren’t supposed to be comfortable either. In pursuit of ever greater comfort, humans have moved further and further from our pack animal roots, first to agriculture, then to industrialization, finally on to the age of space travel and nuclear weapons. Clearly we live longer now, but there must be something said about the fact we are still essentially hardwired for living in small groups of extended kin networks, hunting and gathering. Only in the past 5,000 years of our million-year existence have we done anything but. And the wolves who joined us in the ancient past have over the course of human progress increasingly become more and more comfortable as well. What was once a lupine hunting partner, an equal, now fits into purses; and its food is purchased at the store.

In sharp contrast to us and our domesticated canines, selectively bred into deformity, wolves still exhibit the primal realities of life. Their existence is stripped down to survival, but their lives are not made meaningless or undignified as a result. The lives of wolves make clear just how far back and deeply rooted the best parts of our lives go. Belonging, making friends, defending family: these can all be said to be “animal” traits as well as human. The Dutchers make a compelling argument that love, friends, and family are indeed correct terms for describing how wolves can feel about one another. In their passionate effort to defend wolves in a political climate where their existence is up for debate, the Dutchers perhaps are guilty of romanticizing wolf behavior. But the takeaway for humanity stands: What makes us human is what makes us animals, and our love is older than our civilizations.