Attention Must Be Paid: The observational power of 'Poetry

Attention Must Be Paid: The observational power of 'Poetry 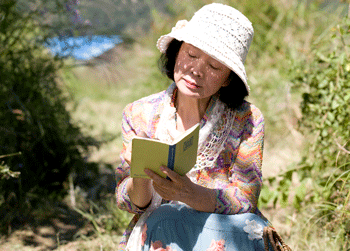 Poetry,” the acclaimed new film by South Korean filmmaker Lee Chang-dong, is filled with irony. Quietly, with only snatches of dialogue between the main characters, it makes bold statements. It demonstrates the sexual vulnerability of females both young and old and the tendency of parents to cover up the crimes of their children rather than to demand responsibility from them or to show them what moral behavior looks like. The film is also a testimony to the power of simply paying attention, a skill learned in this case through a poetry class. From the opening scene, in which children find a corpse floating down a river, Lee’s slow-paced shots magnify their visual effect, which makes them linger in the viewer’s mind.

The plot, which unfolds piece by piece, requires viewers to put together a puzzle. Mija (Yun Jung-hee, an award-winning star of 300 films) is a pretty 66-year-old who lives in an unnamed city in South Korea. She passionately wants to write a poem. One may wonder why, since her life is already full. She is raising her only grandson, Wook (Lee David) in a small apartment and works as a domestic assistant to a man who is handicapped. In at least two scenes, she bathes this man as they talk. Once, he becomes sexually aroused and tries to pull her into the bath but she leaves, indignant. Mija has also started forgetting things, which she mentions to her doctor, who tests her for Alzheimers. Learning that she has the disease is a heavy load to bear, but she never tells anyone. She even lies to her daughter (Wook’s mother) about her health, though it is unclear why. Mija continues to cook and clean for Wook, telephones her daughter regularly and signs up for a poetry course at the local senior center.

The corpse, it turns out, is that of a local schoolgirl named Agnes, who jumped off a bridge after six schoolboys, including Wook, gang raped her in a science classroom. As Mija takes in this horror, she begins to look at her grandson, seeing him as though for the first time: his habitual ingratitude, his sullen laziness, his ways of locking her out of his life.

Mija also begins to empathize with Agnes’s mother, whom she does not know. She takes a long bus ride to visit Agnes’ home, yet when she meets the girl’s mother she makes no reference to her loss. When Mija visits the church where Agnes’ funeral Mass is taking place, the music, prayers and pain of those present overwhelm her. While rushing out, she grabs a photo of Agnes. One morning Mija places the photo on the breakfast table in front of Wook, telling without a word that she knows of his misdeed.

Mija’s practice of “seeing” develops at the urging of her poetry teacher, who suggests that his students closely observe everything around them—for that is where poetry comes from. Mija, a careful listener and eager student, takes his words to heart. Increasingly, she embodies the empathy and gratitude that result from attentiveness and reflection. Throughout the film, Mija carries a little notebook and stops to write in it even, at one point, in the pouring rain.

The fathers of the boys involved in the rape, meanwhile, have organized to collect hush money (1 million wan or $4,000 apiece, by my calculation) to keep Agnes’s mother from formally pressing charges. Mija has no way of paying such a sum. The ethical dilemmas of this situation cross cultures. Is this plan fair? How can Mija raise her share of the money? She finds a way, but is it ethical? And what about the boys—will hush money serve them well? Lee’s film raises these moral questions. In its dilemmas, crimes and broken relationships, “Poetry,” mirrors life, illustrating how similar in some respects are the lives of South Koreans and Americans, despite many cultural differences.

Having searched for inspiration, Mija finds it by the end of the film. What begins with observation becomes resolution, then bold action for justice and, finally, transformation. What she has learned will profoundly affect those around her, too. Even though she is a woman with few resources, Mija makes sacrifices and incurs deep losses. But she also makes gains, finding much more, perhaps, than she ever thought possible. And she writes a poem.

“Poetry” (with English subtitles) raises unanswered questions. What keeps Wook’s mother from raising him? Why is Mija so intent on writing poetry? One of her teachers says she might have a talent for the art, but that reason fails to convince. And why does a popular male poet at the poetry slams Mija attends insist on writing such bawdy verse, if observation truly leads to insight? None of this is resolved.

Lee’s film won best screenplay last year at the Cannes Film Festival. It opened in U.S. theaters in February 2011, and in March received four more awards, including best director, from several international film festivals. “Poetry” is a thoughtful, provocative and inspiring film that deserves the kind of attention that Mija gives to life.

Karen Smith has paid careful attention to the film, "Poetry," which, despite all its honors, and a beautiful performance by the heroine, I found quite disappointing.  Perhaps if I had watched it with the patience and thoughtfulness of your reviewer, I would have appreciated it more.

This article also appeared in print, under the headline “Attention Must Be Paid,” in the April 25, 2011, issue.